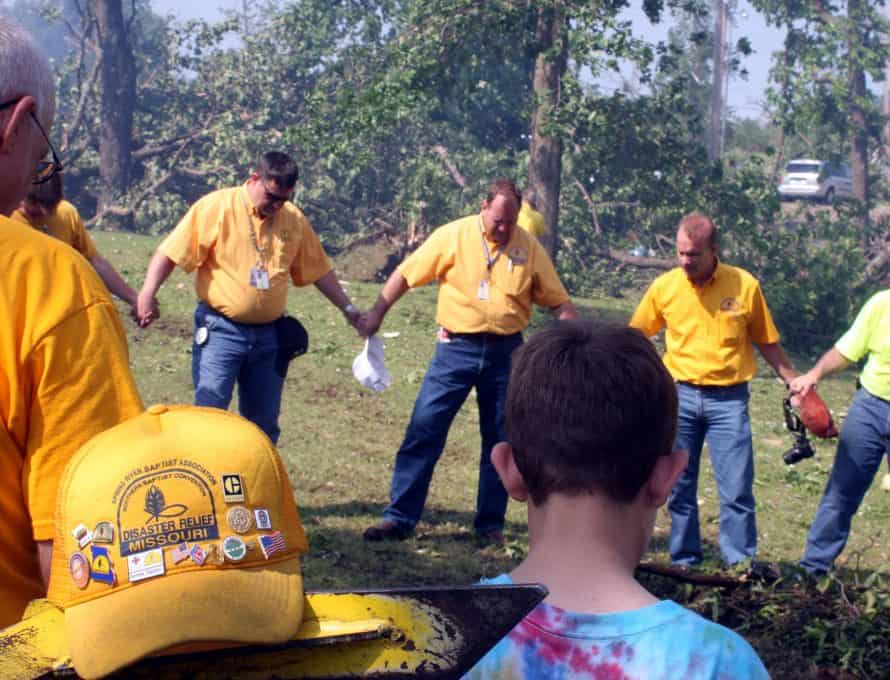 JOPLIN – Disaster Relief volunteers pause for prayer before continuing in their efforts to bring help and hope in the aftermath of the EF5 tornado that struck Joplin 10 years ago, on May 22, 2011.

JOPLIN – The community of Joplin is remembering the EF-5 tornado that struck their city ten years ago on May 22, 2011. Missouri Baptist Disaster Relief (DR) volunteers also shared their reflections with The Pathway in a series of recent interviews. Many said it was probably the largest DR mobilization in MBC history.

The massive tornado touched down in the southwest Missouri city on a Sunday evening.  It roared through a 13 mile path and left total destruction about a mile wide (in some places).  Outside the direct path, there were many trees and houses damaged. But in the center of the path it totally leveled buildings, houses, trees and anything else in it’s way.

At the time, Ron Crow was the pastor of First Baptist Church in nearby Diamond.  He is now the Disaster Relief director for the Kentucky Baptist Convention.

Crow was about 12 miles south of the tornado and was in Sunday evening worship services.  They heard the warnings and were sheltering.  As soon as he began receiving texts and calls saying how bad the damage was, he went home and changed into his Disaster Relief uniform and grabbed his badge and gear.

“I did not realize how significant the damage was until I got there” he said.  “The disaster zone was overwhelming.  This was more than a tornado, this was a major storm.  I mean it cleared all the property out.”

Crow continued, “I arrived at the emergency management office—where I knew many of the people in the county.  When I walked in, a Red Cross guy recognized my yellow shirt and said loudly, ‘The Southern Baptists are here!” Crow said the room broke out in applause.  He knew then that Southern Baptist DR would have a big part to play in the recovery from this storm.

Crow spent several weeks helping coordinate the disaster recovery efforts.  He was used as a local resource person since he knew the area and was able to provide much assistance to the state DR director at that time, Rick Seaton.

Seaton arrived on scene the following day and said it was a “really heavy scene.”  He felt a lot of responsibility was on his shoulders, but he said there was a lot of support from the MBC DR workers and from 3 or 4 other state conventions who sent DR units to help with the recovery.

“This storm just came out of nowhere,” Seaton said. “We knew the Lord wanted to use us in the community to minister to people who had been affected.”

He credited a lot of the help in the days following to Crow and to Spring River Baptist Association DOM Steve Patterson (now retired and living in Oklahoma).  Seaton is now the pastor of Corticelli Baptist Church, Russellville.

David Derden, a seasoned Disaster Relief volunteer who lives in Sedalia, called Seaton and offered to help coordinate the Incident Command Center for the MBC DR teams.  An IC center is where all the incoming teams of volunteers are coordinated, communicated with, and it is the interface for the community as the recovery efforts get underway.

Derden added, “I drove down to Joplin the next day, and it was like you’ve never seen before…as bad as it will ever get.”

“When you have a tornado, you usually have houses damaged and trees stripped of their branches. But this one leveled the houses, buildings and the tree trunks. Everything was just gone.  People told me there was an Aldi grocery store on one corner, but all that was left was a concrete pad. It was a slow moving storm, just churning away for a couple of minutes as it passed.  There were several fatalities.”

They set up in Fellowship Baptist Church, Joplin, and coordinated the work.  There were as many as 700 workers who went out from there, many of them sleeping there in the church and being fed meals by a feeding unit.

There were 28 chain saw/recovery units from Missouri sent out to work. There were chaplains working alongside them. There were some people saved.

Chaplains went to funerals and comforted families as well as the beleaguered pastors who had multiple funerals to conduct. Chaplains also accompanied recovery units as they helped people with downed trees and damaged roofs.

A child care unit was established and provided care for people’s children as they sorted through their homes and found new places to live.

Derden said there were college girls who came to the center to help with the tremendous amount of phone calls the IC center received from the public asking for assistance.

Jerry Palmer was in the process of establishing a communications unit for the state DR ministry.  He and others had just set up a unit in a mobile trailer.  They had satellite internet and VOIP phone service up and running soon to help with communication in and out of the disaster zone.  They outfitted the unit with base station and portable business band radios to help coordinate the recovery units in the field.

Current DR director, Gaylon Moss, who was not in Missouri at the time, said he appreciates the significant response the MBC and others had at this time. He said, “Devastating events remind us we are helpless, destitute and not in control.  We need a rescuer because we cannot help ourselves.  It is an illustration of our spiritual condition before Christ and after Christ.”  He went on to quote Titus 3:14 where it urges Christians to “devote ourselves to good works.”

Moss and others concluded, “Let’s be prepared to be people of good works.”