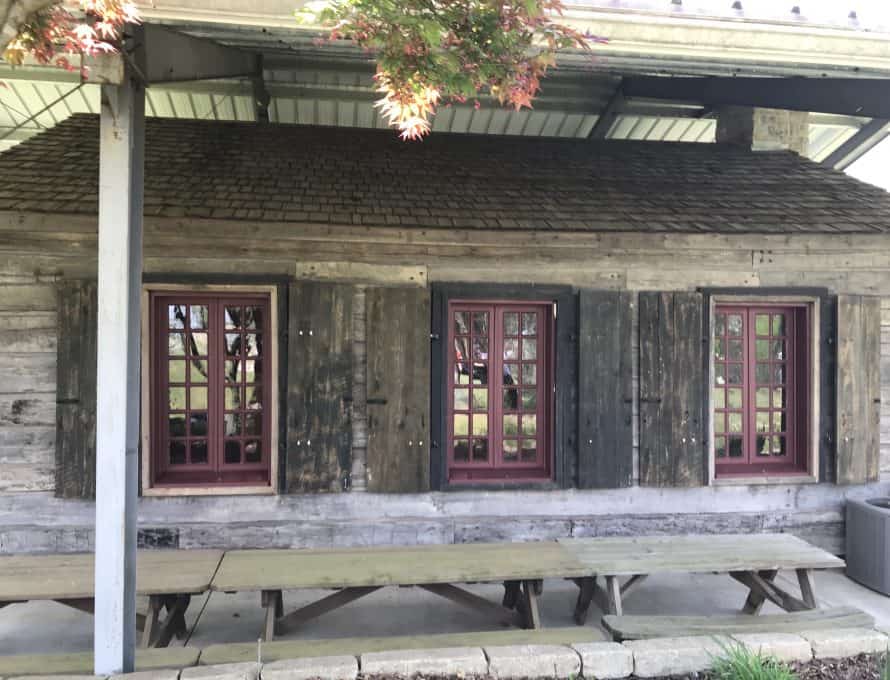 JACKSON – The Missouri Baptist Convention Historical Commission met April 26th at First Baptist Church, Jackson. After a meeting and lunch the commissioners moved to the historic Old Bethel Church just outside of Jackson.

There they were given a tour of the church and cemetery and met with the church’s caretaker, Dallas Seabaugh.  Beverly Nelson, a member of First Baptist Church’s Old Bethel committee updated the commissioners on the history of the church, the reconstruction of it and the upkeep that it receives through the efforts of the Jackson church and Mr. Seabaugh.

The Old Bethel church was established July 19, 1806 by settlers in the newly established Louisiana Purchase.  It is the first non-Catholic church built west of the Mississippi River.  Prior to the Louisiana Purchase the territory was owned by Spain and then later by France.  Catholicism was the only legally approved religion.

As the United States continued to push westward, there were a few settlers who had moved into the territory that is now the southeast corner of Missouri.  Some Baptist preachers crossed the Mississippi River at nighttime by boats or by swimming in order to surreptitiously visit the log cabins and have worship services for the pioneering settlers.  The church was formed, wrote a constitution, built a simple log building and called a pastor the next year.

In 1811 the New Madrid earthquakes occurred. It was a terrifying experience and aftershocks continued throughout that winter into the next year. It caused the people of Jackson to seek the Lord and during this year membership of Old Bethel increased from 73 to 142.

The church served the needs of the Jackson pioneers well and they sent out members and missionaries to start as many as 9 other churches, including what is now First Baptist Church, Jackson (the only one of these churches that now survives as a congregation).

A cemetery adjacent to the church has many graves (some without grave makers) from the early 1800’s, many having died young.

In the mid 1860’s the church ceased to exist.  The church was torn down and the wooden logs were sold and ended up in an agricultural building near Jefferson City.

In the 1940’s the land and cemetery was obtained by the Missouri Baptist Convention.  In the late 2000’s an effort led by Second Baptist Church, Springfield purchased the logs from the original church and they were moved back to Jackson.  The funds were raised to rebuild the church and a protective metal covering was erected over it.  There are efforts now to install bathrooms with running water on the site.

Dallas Sebaugh, caretaker, has worked at the site for many years to care and maintenance for the grounds, the building and the cemetery

David Updegrave, president of the Historical Commission, said “We are grateful for those who went before us and for our Baptist forbearers’ efforts which resulted in the building of this church.”

The Commission concluded their meeting at the church site and made plans for further improvements to the property.