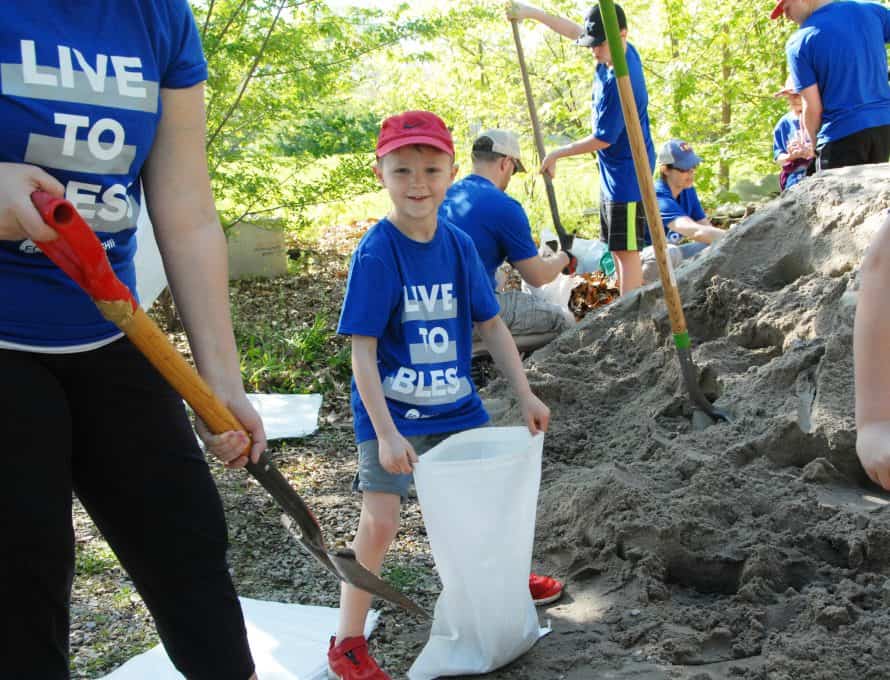 GREENWOOD – Silas Findley of Fellowship Church, Greenwood, held a sandbag open for a volunteer to shovel sand into as part of their “Live to Bless Weekend” on May 1. The church put together several pallets of sandbags to be stored in a secure and dry place and ready to be picked up and used for some future flood fighting effort. (Pathway photo by Adam Foster)

JEFFERSON CITY – When floodwaters rise there is a quick and sudden demand for sandbags to shore up levees and surround buildings in threatened flood plains.  Often there is a mobilization by local residents and public authorities to gather the sand, bags, pallets and volunteers to create the thousands of sandbags urgently needed.

The Missouri Baptist Disaster Relief (DR) organization is offering a solution to the lag time between the need and the availability of sandbags.  They are mobilizing in advance of the next flood to have pallets of sandbags already filled, stacked on pallets and stored in a dry, safe places. They want to have them strategically stored in many locations around the state ready to be picked up and used quickly.

In the month of May, five churches responded to an appeal to create a supply of filled sandbags and securely store them, ready for the next flood.

One of the churches that responded to this effort was Bethesda Baptist in St. Charles.  Pam De Priest, the project coordinator, was trained in Disaster Relief ministry a year or so ago and she took several more of her fellow members to a recent training at First Baptist Church, O’Fallon in April.  There they learned of the “Floodfight Initiative” as it is being called by DR leaders.

DePriest said, “Well, we are a small church but we thought we could give it a try.”

They scheduled a workday to fill the bags on a Saturday in late April.  They found local companies were willing to donate materials such as the gift of several pallets from the Care Tech company in St. Louis where one of the church members works.  The sand they had delivered to the church parking lot was discounted pretty significantly by the World Outdoor Emporium in St. Charles. Both companies appreciated the effort they were putting in and wanted to partner with the church.

Their bivocational pastor, Harry Halcomb, was one of the enthusiastic promoters and a hands-on volunteer in this project.  They announced it several times and gathered church volunteers. They were joined by some students from a local high school along with their teacher, Steve Brook, who leads worship at the church. They also had volunteers from a local society for Venezuelan immigrants who have a connection to the church.  The group filled bags and stacked several pallets with them to be stored in a nearby warehouse.

DePriest said, “I was encouraged.  All of us can have a little part. Whether it is to scoop sand or hold the sandbags, we worked together to serve the Lord.  Even if we can’t go to fight the flood, we can show the people (affected by it) that God loves us and them.”

In the Kansas City area, Adam Foster, associate pastor for children and families at Fellowship Church in Greenwood, said they thought it was a great project, and they incorporated it into their “Live to Bless Weekend,” May 1.

He said many of their members have gone out on Disaster Relief flood relief trips as far back as Hurricane Katrina in the Gulf Coast in 2005.  He spoke of his members “coming back from a DR trip with some pretty cool stories of life change, the impact of serving side by side with the homeowners.  Each of them appreciate the Bible presentation at the end of their project.”

“Partnering with MBC DR is an excellent way to be the hands and feet of Christ.  As we like to say at Fellowship Church, we demonstrate the gospel to earn the opportunity to declare the gospel.”

Brandon Kiesling, associate pastor of gospel proclamation at First Baptist, O’Fallon, led a group of people to participate in the Floodfight Initiative, as well.

He said it was a church-wide project, but the youth took the lead in filling the sandbags along with several deacons from the church.

“We’ve been active in DR for many years here.  We are in a pretty flood-prone area here near the Missouri River.  Many people in our church have been affected by flooding and have been helped by MBC DR.”

He added, “We see a great need there to meet needs and share the ‘greatest news’ with these folks in floods.

More churches are needed in the Floodfight Initiative in many different regions of Missouri.  DR systems coordinator Eric Barb said he hoped there would be as many as 12 churches completing the project, filling and storing several pallets of sandbags and having them ready to go when the next flood occurs.

More information may be found at www.mobaptist.org/dr/flood-fight/.  There is a list of instructions, promotional materials and PowerPoint slides there to use to organize a church effort.  For more information contact Barb at (800) 736-6227, ext. 317 or e-mail him at ebarb@mobaptist.org.