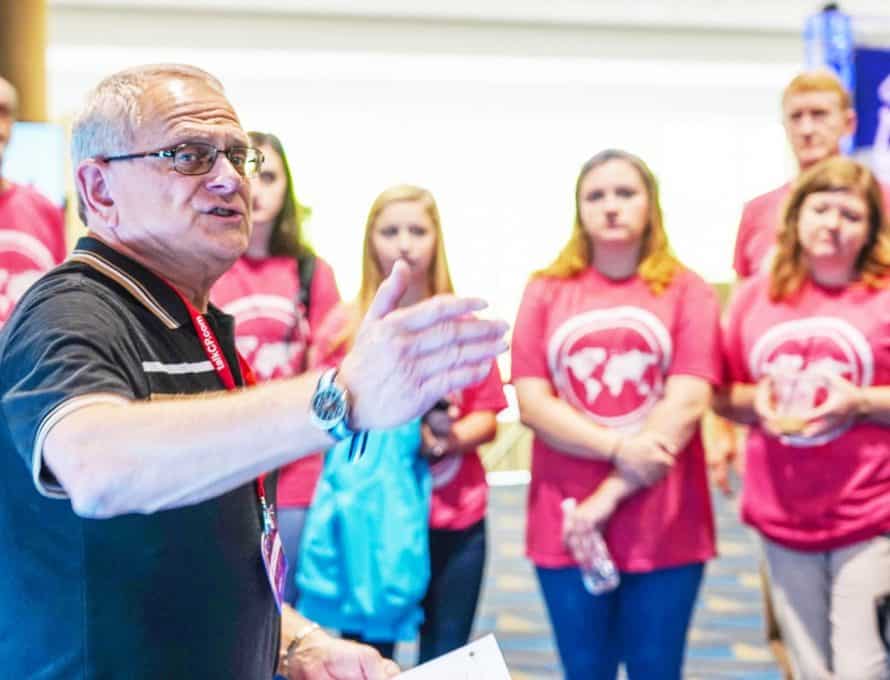 BIRMINGHAM – Don Currence, pastor of administration at First Baptist, Ozark, trains registration volunteers on Sunday afternoon prior to the two-day SBC annual meeting June 11-12, 2019, at the Birmingham-Jefferson Convention Complex in Birmingham, Ala.

Litton, director of planter spouse development for the North American Mission Board, stepped down as registration secretary in January when it was announced that her husband Ed would be nominated for SBC president. Kathy Litton was elected to the position at the 2019 SBC Annual Meeting in Birmingham, beating out Currence, who also had been nominated and had served in the role the previous two years. Litton did not get to fulfill her duties as the 2020 meeting was canceled due to the COVID-19 pandemic.

“It is my joy to nominate Don Currence for registration secretary at the 2021 SBC in Nashville,” Litton said in a Monday (March 8) announcement. “Immediately following my very narrow victory in 2019, I met with Don to discuss the transition. This was when I began to learn just who this man was.

“Understandably he was disappointed, yet he couldn’t have been more gracious as he extended the most generous spirit of cooperation to me. Don had developed a strong team of volunteers who played a significant role in the registration process. He even encouraged them to remain in place to help me as I would be in great need of their assistance.”

In 2020, First Baptist Ozark gave 6.67 percent of its undesignated receipts through the Cooperative Program, according to information provided by the Missouri Baptist Convention. First Baptist’s total missions giving was 14.47 percent of undesignated receipts. The church’s giving was confirmed by data from the SBC’s Annual Church Profile (ACP) database.

According to ACP, First Baptist recorded 16 baptisms last year, with an average worship attendance of 581.

“Don Currence represents the best of who we are as Southern Baptists,” Litton said. “Not only did he administrate his duties with the highest standard of ethics and professionalism, but he is also a man with a heart of gold and never once made this work about him.”

Currence has served as a trustee for New Orleans Baptist Theological Seminary (NOBTS) as well as in numerous state and local Baptist association leadership roles in both Missouri and Louisiana.

He received a bachelor’s degree from Southwest Baptist University in Bolivar, Mo., and a master’s from the NOBTS in 1981.

He and his wife Cheta have two daughters, Hannah and Leah, both in college.