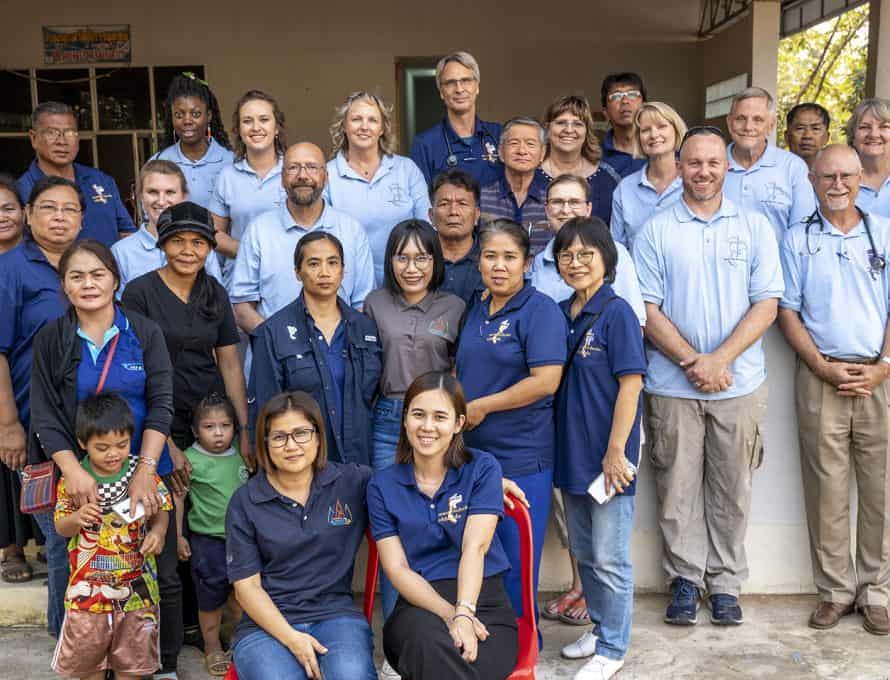 IMB missionaries Doug and Cheryl Derbyshire (back row, center) smile for a group shot with volunteers from the U.S. and Thai partners in the mobile clinic ministry. (IMB photo)

RICHMOND, Va. (IMB) – We might not know what to expect for 2021, but we do know that God is still moving and Southern Baptists need to be prepared to answer the call to reach the nations. At the IMB, we’ve been so grateful to hear from individuals and churches who remain committed to using their gifts, skills and experiences to share the gospel, make disciples and plant churches. We’re thankful for each of you because there will never be enough missionaries from any country to complete the job of reaching the unreached with the gospel.

One of IMB’s strategies is to stay focused on the Core Missionary Task (CMT). This includes entry to a people group or country, evangelism among non-believers, disciple making of believers, church planting, leadership development and, finally, exit to partnership. This final step is crucial to leaving the task in the faithful hands of local church leaders and national partners.

The great thing about the missionary task is that there are opportunities for short-term teams to engage in every aspect. Let me share with you three quick insights I learned about short-term teams and partnerships while serving almost 29 years overseas.

Partner with IMB missionaries as soon as possible.

Joining existing work can multiply your efforts. Missionaries are uniquely situated on the front lines to direct you and your teams to the most strategic work that can lead to long-term results.

Here’s an example of what that looked like for one church in Arkansas. This church chose an unengaged, unreached people group and committed to pray. They also decided to make trips to South Asia to try to find their people group. On these first trips, they did not contact the IMB for help.

They went for five years in a row and were not able to find the people group. They finally connected with Steve*, a missionary in South Asia. Steve assured the church he would start looking for members of this people group.

The next time Steve held a church-planting training event, he asked if anyone knew a person from this people group. Right there in front of him was a fairly new pastor from this exact people group. Steve rejoiced that he had met this pastor. Until that time, he did not know of any believers among this group. The young pastor was leading a small group in his village who had come to faith.

When Steve asked the pastor when the people in his village had come to faith, he found out that they had all come to faith in the previous five years. Once the church in Arkansas started praying, the Lord started working. The church was excited to hear this news and to finally have contact with the people for whom they had been faithfully praying. On their next trip to South Asia, they met these dear people and visited their village with the missionary. They shared the gospel and ten more people gave their lives to Christ and were baptized.

Over the next few years, as the church partnered with Steve, more than 200 came to faith. The believers started a church and built a training center so that they could reach out to the other 42 unengaged, unreached people groups in that area.

Look for some Epaphroditus-like qualities in your short-term volunteers.

Epaphroditus is my favorite short-term partner in the Bible. His story is found in Philippians 2: 25-30. When I read this passage, I see some important qualities that Paul described in his friend, sent as a short-term worker from the church in Philippi.

How did Paul describe this short-term missionary?

What qualities are the short-term workers in your church bringing to the team? How might you, personally, develop these qualities in your own life before your next mission trip?

Nurture the cross-cultural calling you see in members of your church.

Here are three ways you can you nurture and train those who are sensing a call to serve cross-culturally:

The Revelation 7:9 vision promises that one day we will see a vast multitude from every nation, tribe, people and language before the throne worshiping the King of Kings and Lord of Lords. Your preparation now and your continued partnership with us will multiply laborers across the world so that we can make disciples of all nations.

Todd Lafferty, who wrote this article, is executive vice president of the IMB.

If you or your church would like to explore short-term mission opportunities or a partnership with an IMB missionary as you prepare for your next mission trip, connect with the IMB now by emailing info@imb.org.