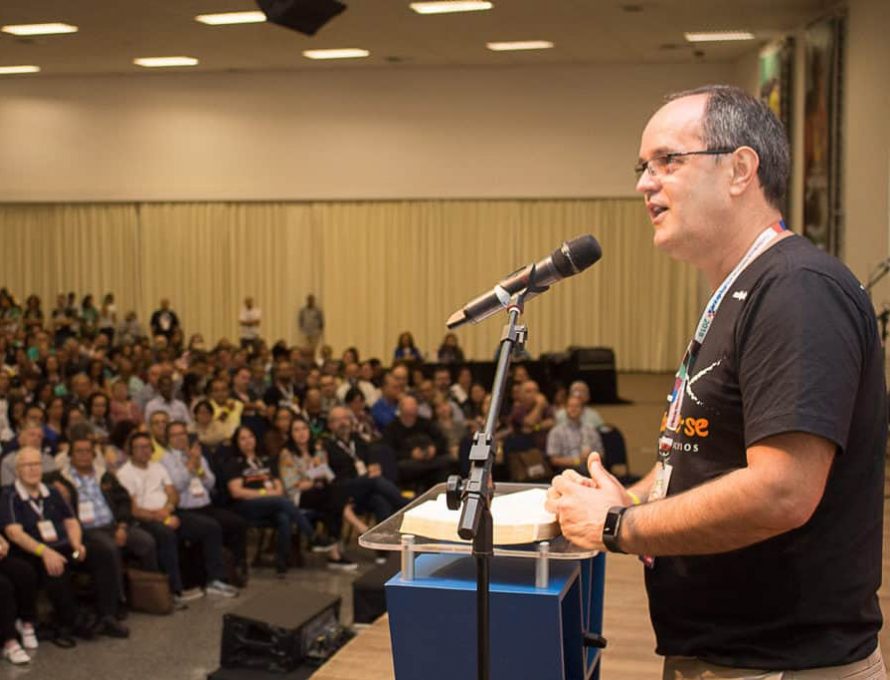 More than 900 missionaries serve through the National Mission Board (JMN) of the Brazilian Baptist Convention (CBB). Fernando Brandão leads the convention. (JMN photo)

BRAZIL – “Still other seed fell on good soil, where it produced a crop—a hundred, sixty or thirty times what was sown” (Matt. 13:8 NIV).

Multiplication is inherent to biological life. Thriving beings, such as cells, plants and people, multiply. Likewise, thriving disciples and churches multiply. And the message of Jesus spreads throughout the world.

Fernando Brandão, who heads the National Mission Board (JMN) of the Brazilian Baptist Convention (CBB), understands the importance of multiplication. As he considers the 210 million people in Brazil, he says, “We want one Baptist church for every 10,000 people who do not know Jesus.” Brandão is confident that the Lord can multiply churches to take the gospel to every unreached person.

Brandão understands what this joint venture is asking of churches. He knows what leading a reproducing church entails. He pastored a mid-sized church in Brasilia that birthed 38 church plants. Brandão had a concurrent federal position at the Bank of Brazil. His move from those responsibilities into national leadership roles leveraged his ability to equip and place ministers to cultivate reproducing churches nationwide. His wife, Marcia, and their three children embraced Brandão’s new ministry position, though it meant living on one quarter of their family’s previous income. “Unless a grain of wheat falls to the ground and dies, it remains by itself. But if it dies it produces much fruit” (John 12:24 CSB).

Executive director of JMN since 2007, Brandão oversees the strategic placing of gospel workers. Also rector of the South Brazil Seminary since 2017, he tills a seedbed of church leaders and missionaries. The Lord has amplified Brandão’s influence throughout the Americas and across the world as he serves regional and international missions cooperatives. Those who know him well consider him a gospel statesman.

Brandão embodies the principle of multiplication. His crop is a hundredfold. But it grew from a scattering of seed that fell on him in adolescence.

Brandão was born in the rural interior of Bahia State to a humble Roman Catholic family. They moved to the city of Jaguaquara because his parents wanted their two boys to have a good education.

Taylor Egidio Baptist School, one of the oldest in Brazil, was founded by pioneer Foreign Mission Board (now International Mission Board) missionary Zachary Clay Taylor. Brandão’s mother requested that this school grant student scholarships to her sons.

Fernando attended both the school and the adjacent Baptist church, where he responded in saving faith to Jesus under the preaching of FMB (now IMB) missionary Jerry Smyth. Immediately, he joined missionary Francis Smyth’s discipleship group. Fernando was 14 years old at the time. He recalls selling homemade popsicles to give his first missions offering.

God called Brandão to ministry, and after high school he earned a bachelor’s degree at a Brazilian Baptist seminary. One IMB missionary who was president of the seminary and another, Professor Thomas Wade Akins, founder of Pioneer Evangelism, deeply influenced him.

Through relationships with IMB missionaries and their partners, Brandão enrolled in Southeastern Baptist Theological Seminary master’s degree program, graduating in 2016. Throughout his life, Brandão emphasizes, Southern Baptist missionaries serving in Brazil have impacted him. He is thankful for them and continues to cherish the ties. While in Texas last February, he dined with Dr. James W. Bagby, a fifth generation descendent of William and Anne Bagby, the first missionaries to establish Baptist work in Brazil. Brandão continues the Great Commission legacy, devoting his own life to investing in others who will invest in others also.

Brandão understands that for seed to multiply, the soil must be good. Facilitating the worldwide sowing of the gospel demands time and energy. Nevertheless, above all Brandão cultivates a close relationship with the Lord. He reads the Bible cover to cover three times each year. The Bible provides the content for many of his prayers.

Please join Brazilian Baptists and their IMB partners in praying that the multiplication rate of churches in Brazil will continue to increase, that all people may have the opportunity to respond to the gospel and be enfolded in a local church.

This article was written by Guy Key and Jennifer Waldrep. Key is a second generation IMB missionary and global catalyst for Brazil. Key and his wife, Elena (a third-generation missionary), assist churches who are reproducing into underserved districts. Waldrep also serves with IMB among American peoples and is a contributing writer.