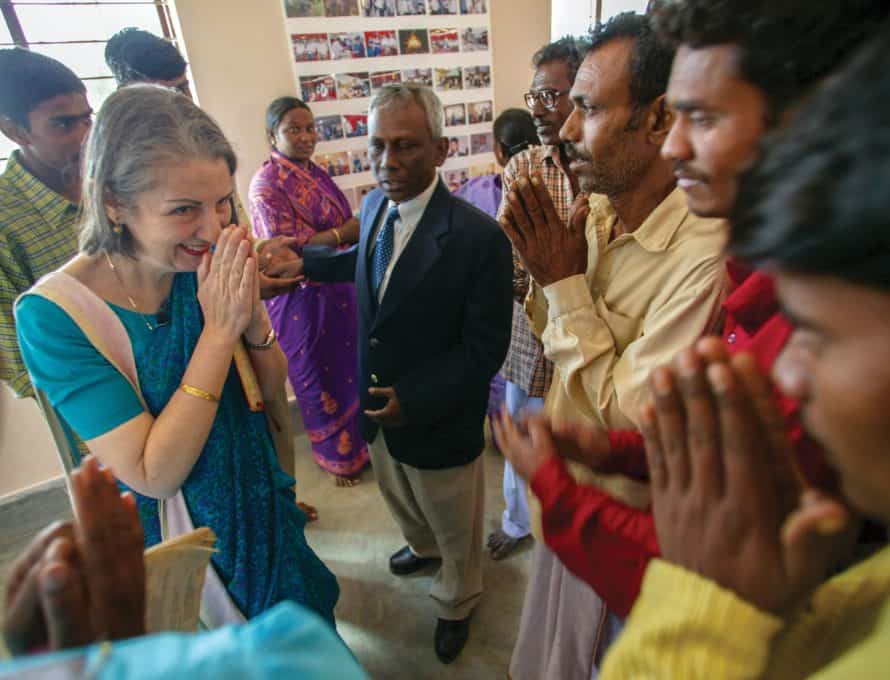 Rebekah Naylor greets church members in Bangalore, India in 2004. Although she moved to the United States in 2002, Naylor returned periodically to India until her 2009 retirement from the IMB as a strategy coordinator with local churches. Photo courtesy of IMB

FORT WORTH, Texas (BP) – It’s been over 20 years since Rebekah Naylor returned to the United States after decades of work at Bangalore Baptist Hospital. But she still uses personal pronouns like “we” in referring to the efforts of medical staff there battling a horrific COVID-19 surge that is killing more than 3,000 per day.

“It’s overwhelming, the sadness at the loss of life when you see the images on TV of people suffering, people struggling to breathe outside of the hospital and the fires of bodies burning,” she said Monday (May 2). “Also, many of these people have never heard the Gospel and name of Jesus. They are lost and going to eternity with no hope.”

Naylor joined the staff at Southwestern Baptist Theological Seminary last August as its first-ever female distinguished professor in addition to becoming the permanent missionary-in-residence for President Adam Greenway’s administration. Prior to that, she had served as a general surgeon, evangelist and church planter through the Foreign Mission Board (now International Mission Board) at Bangalore Baptist Hospital from 1974-2002. In 1996 she supervised the construction of the Rebekah Ann Naylor School of Nursing in Bangalore. From 1999-2009 she was a strategy coordinator and church planter in the state of Karnataka.

Prior to entering the mission field, Naylor earner a medical degree from Vanderbilt University School of Medicine. She would go on to complete her surgical training in 1973 before becoming certified by the American Board of Surgery and named a fellow of the American College of Surgeons.

And while her feet are on American soil, she maintains an almost daily contact with peers in India.

“That’s still home for me and where my closest friends are,” Naylor said. “My understanding is that the hospital has more than 200 COVID patients admitted with a significant number of the staff sick. They’re having to turn people away constantly because there is simply no place to put them. When you think of those issues together, you begin to see the emotional strain it brings.”

America saw nothing close to what India is experiencing today, where a shortage of medical workers is requiring trainee doctors and nurses to forgo their exams to lend a hand. Nevertheless, Naylor reflected on a year ago when concerns in the U.S. were still heavy with “flattening the curve.”

“Compound that with all those they’re turning away and can’t help in India,” she said. “That’s hard for a believer and for health care workers, even if they’re not believers.”

Send Relief is helping mobilize a Southern Baptist response to the humanitarian crisis in India.

“We are working with local partners to minister to critical needs brought on by the pandemic,” the organization outlined in a statement. Partners are mobilizing to:

Those wanting to contribute to the effort can do so through the International COVID-19 Response Fund at www.sendrelief.org/projects/covid-19.

Naylor and Send Relief leaders also call on Southern Baptists to join them in prayer.

“It’s such a tragedy,” Naylor said, “but we need to pray that God would use this to bring people to Himself. Pray for the government leaders as they make decisions on how to deal with the crisis. Pray for medical care workers and counselors across the country. Call on the Lord for mercy to end this thing.

“And most of all, pray that people can learn about the true source of hope and for those grieving to know the Lord of all comfort.”