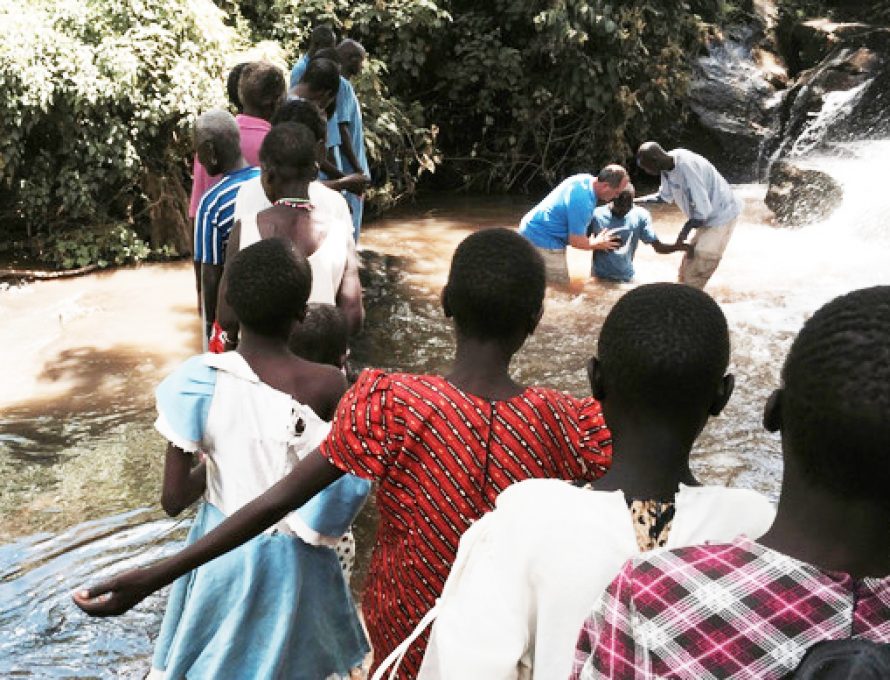 ST. LOUIS – Pastor Tim Cowin of The Rock Church here has seen many people profess faith in Christ and come forward for baptism during his church’s mission work in Kenya and Uganda. (Photo contributed by Tim Cowin)

ST. LOUIS – The Rock Church of St. Louis and Lead Pastor Tim Cowin believe in “divine appointment.”  In the last twelve years, God has been directing the steps of the congregation in a partnership with the people of Kenya and Uganda.  Cowin recently returned from a trip to those countries.

“When I came to pastor The Rock in ‘98,” Cowin said, “I prayed that we could go beyond the mission trips and establish a long-term relationship with a group of people for missions.”

Eight years later, God answered that prayer in a big way.  “When the Smith family joined our church,” he continued, “Karen told me that they had opened a grade school in Africa, and they wanted me to come minister.”

On the first trip, Cowin spoke at Turkwel to a crowd of about 1,000 Turkana and Pokot people.  “This area was the epicenter for violence and unrest between these two tribes,” he said.  “We were celebrating the opening of the school and the two groups were threatening each other.  I took off my shoes and told them that this was God’s land.  I was not there as an American, a Turkana, or a Pokot. I was there to build one tribe, the tribe of Jesus.”

“God is using the school and the gospel to bring peace to the area,” Cowin explained.  “It was like a Pentecost. One man who was drunken most of the time and living a sinful life, stood in line to receive a Bible that he intended to sell.  The Holy Spirit fell on him that evening and he went back to Uganda to his wife and started two churches.”

Cowin reported that God is working in the lives of the people there.  “Since our first trip to Kenya and Uganda, 26 churches have been started.  We are not going to plant churches; we are going to share the gospel.  The churches are the fruit of that sharing.”

“We go to remote areas where there is little evangelism,” Cowin said, “and give them Bibles, preach and feed them.  These areas are isolated and forgotten.  One lady walked for three days to get a Bible.  Another man told me that his neighbors taught him to read with the Bible he got from us last year.”

Cowin and The Rock Church work with many groups to minister in the area.  “We get our Bibles from the Kenya Bible Society,” he said.  “We purchase Bibles in Turkana, Pokot and Swahili.  We also work with many denominations.  We started this trip with a Pastors Gathering in Turkwel because of its central location.”

In addition to the pastors meeting, Cowin visited some of the other ministries started by the Rock congregation.  “We have about 30 orphans in the Esther House and we are working with the Street Boys Chapel started by one of the pastors.  He is working to rescue and reform these boys living on the street,” he said.  “They have no parents, or they have run away from home, and many are sniffing glue.”

“The chief of one of the tribes told us,” Cowin said, “that if we could build a high school for girls, he would give us 10 acres of land to build it on. After middle school, girls are forced into arranged marriages.  Grace Rock School in Shalpogh has 170 girls attending.   On this last trip, I met the first graduating class.”

Cowin also witnessed an answer to prayer after speaking to the inmates of the Kitale prison.

“After I finished preaching,” he said, “one of the prisoners approached me and asked if we could fund a sound system or a keyboard because they had nothing for their worship time during chapel.”

“I was moved in my heart,” Cowin continued, “because I had just been given a $5,000 gift that I didn’t need for the trip.  I turned to them and told them that God had already answered their prayer.”

“Our church doesn’t have any EXTRA money,” he said.  “But God provides the money that we need.  This is beyond what we can do on our own.  This is ALL God.  He puts together the ministry and does it.”