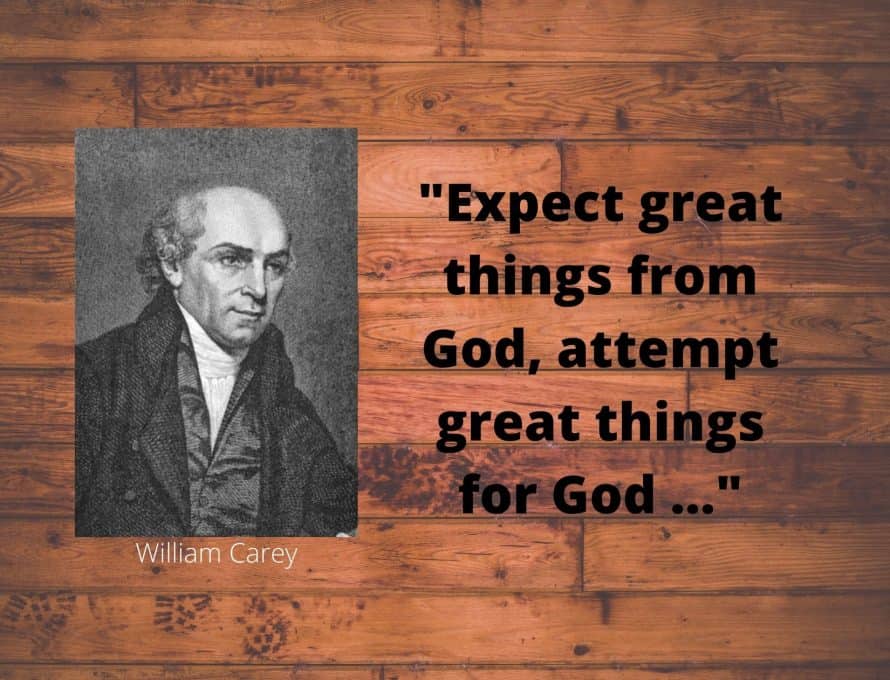 In 1792, William Carey, in a sermon to a gathering of Baptist ministers, supposedly said, “Expect Great things from God, attempt great things for God.” Unfortunately, history has no record of the rest of the content of that message. No one hit record on the camera. But there must have been a third point to his sermon. Every sermon has three points, you know. Unfortunately, the third line did not catch on, like the first two did, and has been lost.

Until I discovered it, yes, through exhaustive search, and prayer, and all sorts of other spiritual methods, I have uncovered the third line. What is that third line you may ask?  Well, after Carey said, “expect great things from God, attempt great things for God,” he most assuredly said, “and prepare to face the fury of Hell.”

We know our adversary hates and wars against the kingdom of God.  After 41 years of ministry in India, William Carey had only made 700 converts, according to Wikipedia’s count. He knew firsthand the wearing down from our enemy, and so to, will anyone who expects and attempts such great things for God.

It is true of your Missouri Baptist Foundation.  In our attempt to Advance the Gospel, I have never been faced with more struggle as I have had recently.  When I was called to this role of leadership of the Foundation, I knew that this was the most strategic position I could give my life to.  Turns out, I was right, but I was not prepared for the battle.

We began the last year with a kingdom advancing impact investment.  We purchased a piece of lakefront property, a campground out of foreclosure.  Within 60 days, the first pandemic in a 100 years hit the Western world.  Our cruise ship, restaurant, hotel rolled into one investment was decimated as summer groups did not come to camp.

Then, as we became increasingly dissatisfied with our investments’ financial return, as the managers began to fail to meet benchmarks, we believed it was time for a change. Our calling as institutional investors must be to not only avoid morally corrupt investments <screening out evil> but to invest in a way that makes the world rejoice  <screening in good> .  While doing so, we were caught with a high exposure to cash during one of the most significant market gains in modern history.

Then, the pandemic affected our personnel and staffing structure in ways I did not anticipate, as several found other opportunities for work, which has forced us to look for new team members.  My experience of leading “creative” peoples has not always translated well in attempting to lead accountants.  Add to that some unexpected failures in new staff, have left us short-handed, again, a problem we have faced the last three years.

Now, I do not want to blame our troubles solely on “the devil” as CS Lewis rightly points out,

“There are two equal and opposite errors into which our race can fall about the devils. One is to disbelieve in their existence. The other is to believe and to feel an excessive and unhealthy interest in them. They themselves (the devils) are equally pleased by both errors and hail a materialist or a magician with the same delight.”

All of which is why Easter is so great.  The victory has already been won.

So in conclusion (from 2 Corinthians 4:8-18, ESV): “We are afflicted in every way, but not crushed; perplexed, but not driven to despair; persecuted, but not forsaken; struck down, but not destroyed.