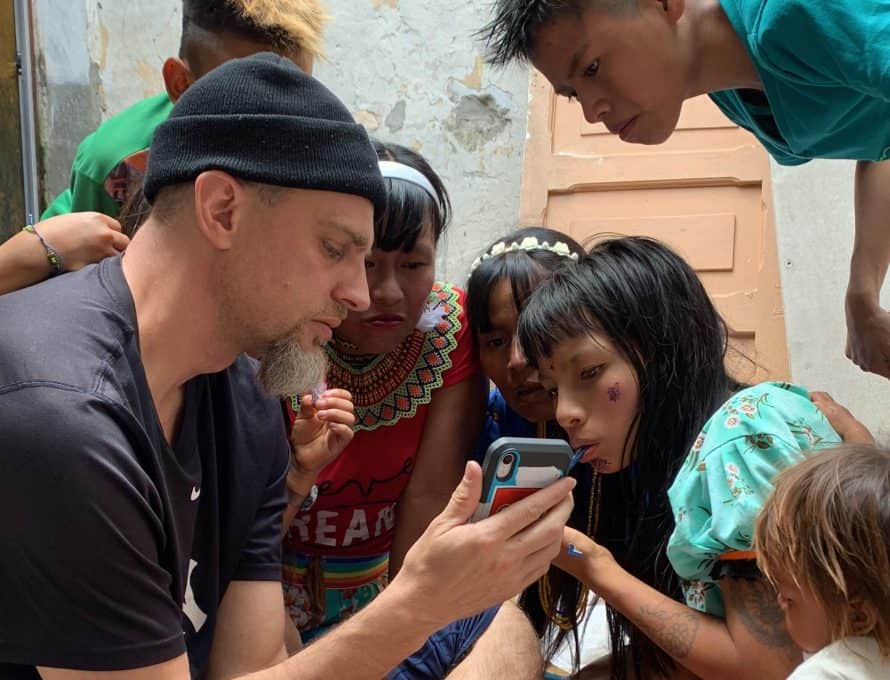 MEDELLIN, Colombia – Travis Burkhalter and his wife, Beth, have served with the IMB in Central and South America since 2010. In those years, their Spanish language skills have steadily improved, and they converse easily with most people in their city of Medellin, Colombia.

When God directed Travis and Beth to serve Indigenous people groups, however, they noticed a communication barrier. Many of these groups do not speak Spanish well, and some do not understand it at all.

“The people group we are trying to reach have fled to the city, due to violence in their home region, and live as internally displaced people,” Travis explains.

Beth established a ministry called the Embera Bead Project to help the displaced families pay for rent, food, medical care and other daily needs. By making and selling beaded jewelry, they are able to provide for their daily needs. This past year, they have relied on online sales because tourists have not been traveling to Colombia.

While the Burkhalters often spend long days helping their friends with physical needs, they understand that the greatest need the people have is a relationship with Jesus Christ. Travis spent six months sharing Bible stories with multiple Indigenous people groups in Spanish, but then realized they were not fully understanding the gospel. Part of this was the limited Spanish that the people understood, but also the stories of the Bible are completely unknown to most of them.

“We do chronological Bible storying which means we start with the beginning stories and work our way through the Bible. They had never heard the creation story, never heard of Adam and Eve,” Travis explains.

Travis decided to learn the language of one particular people group without any known believers. “We are convinced they need to hear the [gospel] stories in their heart language to fully understand. Learning the language is a long-term task that will take years.”

The language is unwritten, and Travis has no resources to help so he is developing his own lesson plans and training his language helper, a friend from the people group who speaks Spanish. Each weekday, Travis travels into the organized crime-controlled neighborhood where his friends live. He usually meets with his language helper in his car—one of the safer places in a community of drug addicts, violence and fear. They spend two hours going over the daily lesson that Travis spent time planning the evening before.

Travis usually chooses a theme, like family or work, and as his friend speaks in the tribal language, Travis records the conversation into his phone and hastily writes out pronunciation keys that he can study later. His friend shares cultural stories from his tribe to help Travis understand this people group, and Travis tells him Bible stories. As time permits, Travis practices the language with other friends in the neighborhood. During his personal study time, he memorizes words, makes flash cards, listens and relistens to recorded conversations, and makes lesson plans for the following day.

“It is a daunting task,” Travis says, “but I am extremely motivated because I know souls hang in the balance.”

Weekly, when Travis meets with the participants in the Embera Bead Project, he shares a Bible story with them while his language helper—who has not yet accepted Christ—tells the story to the people from his tribe. Travis says his goal is to be able to tell the Bible stories in both languages effectively, but he recognizes the challenges.

Travis says he recognizes that prayer is the most important tool—both in their humanitarian ministry with the bead project and in their evangelistic work with the Indigenous people groups. The Burkhalters are also thankful to Southern Baptists who provide for their family and support them with daily resources needed to fulfill their calling, like a vehicle, computer and phone.

“These tools provided by Baptists allow me to learn the language, and I am extremely grateful for how the Lord uses Baptists to fulfill the Great Commission,” Travis says.