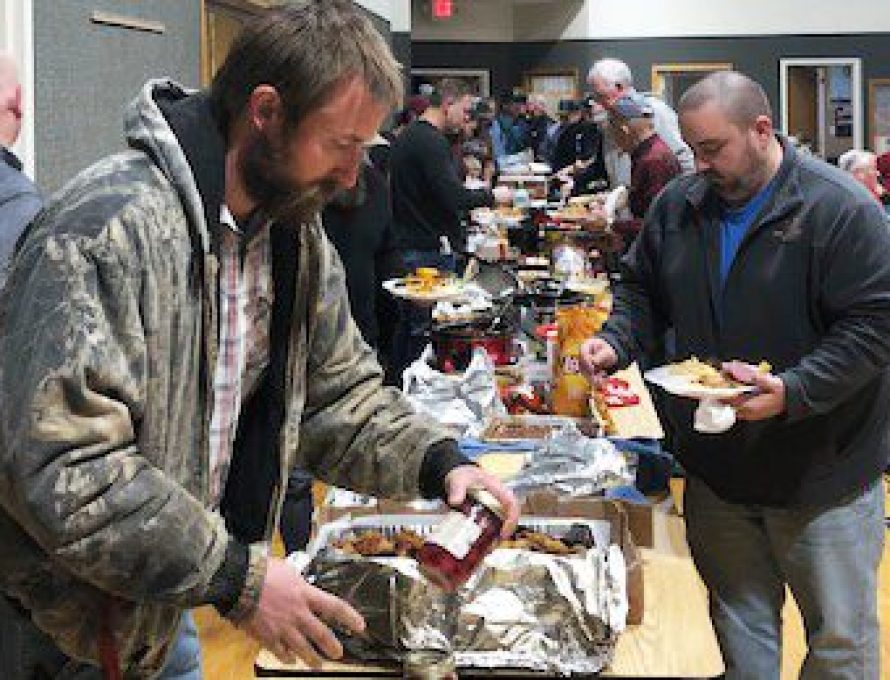 CALIFORNIA – Men and boys from the Concord Baptist Association enjoy dishes of venison, fish, turtle and Elk, along with other side dishes, during the association’s wild game supper at First Baptist Church here, May 12. (Photo contributed by Alan Earls)

CALIFORNIA – The First Baptist Church was the site for the Concord Baptist Association annual wild game supper, March 12.  Dishes such as venison roast, venison summer sausage, fish, elk and turtle gumbo were served alongside many other traditional sides and desserts. The promotional material said to bring a covered dish, “game or tame.”

Outdoorsman and television broadcaster Brad Clay, of Oklahoma, spoke to the group.  He talked of hunting and sports but he brought his message around to Jesus Christ, and at the end 15 people responded to the gospel and prayed to receive Christ.  Clay’s ministry is called “Final Descent Outdoors.”

That ministry was started in 2009 with a goal to produce television shows about the outdoors, but also to present “the Creator of all of it, God.”

Clay grew up in a small town in western Oklahoma, where hunting and fishing was a way of life.  He gave his life to Christ when he was a sophomore in high school.  He responded to a call of God to youth ministry and served on church staff for 12 years.  He then founded the Final Descent Outdoors ministry initially as an outreach ministry in the church where he served.

In addition to his speaking ministry he produces a nationally broadcast TV show that is seen in an estimated 40 million homes in North America.  He also writes Bible study materials for outdoors enthusiasts.

One of the organizers of the wild game supper, Jeremy Smith, said there were about 250-300 men and boys from many of the churches in Concord Baptist Association, the sponsor of the event.

Smith said they have a lot of fun as they hand out “the Possum Award” to the church bringing the most men and boys.  It is a stuffed possum and is a traveling trophy going from church to church each year.

Asked if any possum was served on the buffet line, Smith laughed and said, “Not that we know of….”

Alan Earls, director of missions for Concord Baptist Association, said they are eager to show other churches and associations how they put together the outreach event and welcomes people to contact him through the association website: https://cbamo.org.