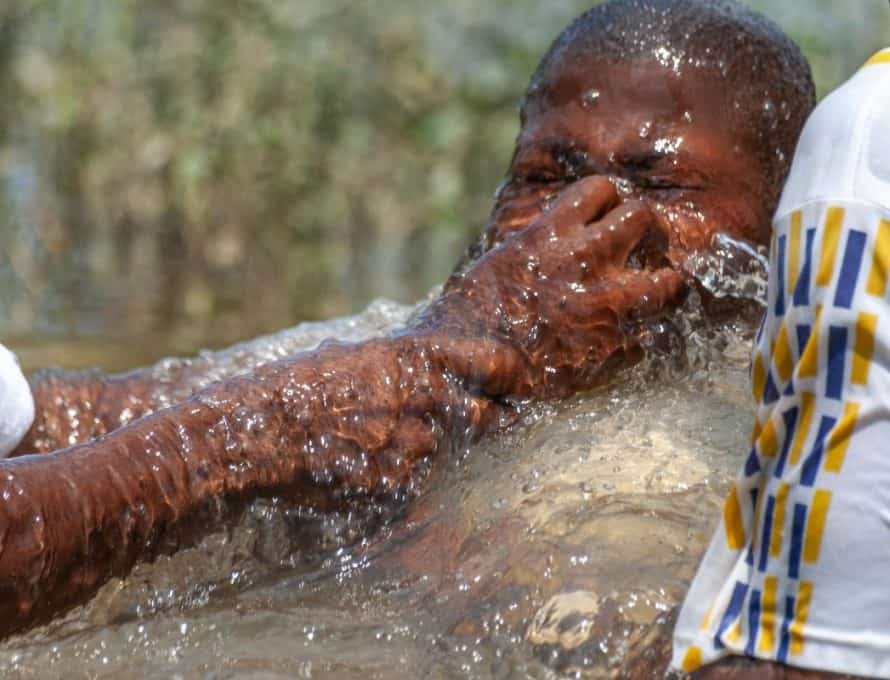 A pastor from a church in Pakro, Ghana, baptizes a new believer in the Densu River outside of Nsawam. Gifts through the Cooperative Program and the Lottie Moon Christmas Offering® make it possible for Southern Baptists to make disciples and partner with others who make disciples in Sub-Saharan Africa and to the ends of the earth. (IMB Photo)

The Lottie Moon Christmas Offering is an annual offering collected by believers around the world to support international missions. The offering is unique because 100% of the gifts are used to provide for missionaries who are spreading the gospel to the ends of the earth.

“I praise God for this significant milestone in giving through the Lottie offering as it indicates that the love of Southern Baptists for the lost has not waned, nor has their commitment to sending and supporting missionaries through the IMB,” said Paul Chitwood, president of the International Mission Board.

“It also reveals the incredible success of the WMU in advocating, since 1888, for every nation, tribe, people and language to have the opportunity to hear the gospel — a partnership for which we are so grateful,” he added.

Gifts were calculated from the inception of the Woman’s Missionary Union in 1888, when the organization first began raising money for international missions.

In 1918, this international missions’ offering was named the Lottie Moon Christmas Offering for International Missions to honor the service of Lottie Moon (1840-1912), a single missionary who dedicated her life to serving in China. While overseas, she wrote letters challenging churches in the U.S. to send and support more mission-field workers.

“WMU was birthed to pray for and systematically raise money for missions,” said Sandy Wisdom-Martin, executive director-treasurer for National WMU. “It’s simply astonishing to think what started as a WMU offering in 1888 to send two women missionaries to help Lottie Moon has surpassed the $5 billion mark.”

“This is absolutely a fishes-and-loaves story,” she said. “Because commitment to the Great Commission was embedded in the hearts of WMU members, they gave sacrificially to fuel the Southern Baptist missionary enterprise. When the offering became a churchwide emphasis in the 1960s, the legacy of Lottie Moon beckoned all Southern Baptists to generosity for the sake of taking the gospel to the nations.

“We’ve been blessed by the sacred opportunity to join a long heritage of faithful Christ followers to offer our resources to be deployed for the Kingdom,” she added. “And just look what God did!”

Through funding from the Cooperative Program and the Lottie offering, statistics gathered since 1845 indicate the IMB has been equipped to send more than 25,000 missionaries to serve in 189 countries. These dedicated men and women represent 228,000 years of gospel service.

“Since the documented record keeping of its mission offering reaching back to 1888, Southern Baptists have been faithful to take the gospel to a lost world through the IMB,” said Price Jett, IMB’s CFO. “Five billion dollars across 133 years is a phenomenal investment in the Great Commission, and we are so grateful for the trust Southern Baptists have placed in us to steward these funds well for the sake of the gospel.”

While people in close to 200 countries have been reached through Southern Baptists by their commitment to the IMB, the need to continue praying, giving and going is still urgent. Research indicates 7,070 people groups remain unengaged and 4.5 billion people are unreached globally.

“But as we consider the task before us and look to the future, the need to reach lost souls is even greater – so great that it is sometimes difficult to wrap our minds around the work we have yet to do to reach the billions who have yet to hear,” Jett said. “The lives and eternities of real people are at stake. We have a great opportunity to reach them.”

Gifts to sustain and grow IMB’s missionary force – generosity that transforms lives for eternity – may be given online at imb.org/give.

“Thank you, Southern Baptists, for allowing us to serve you in carrying out the Great Commission for these past 176 years,” Jett added.

Myriah Snyder is senior writer/editor for the IMB.