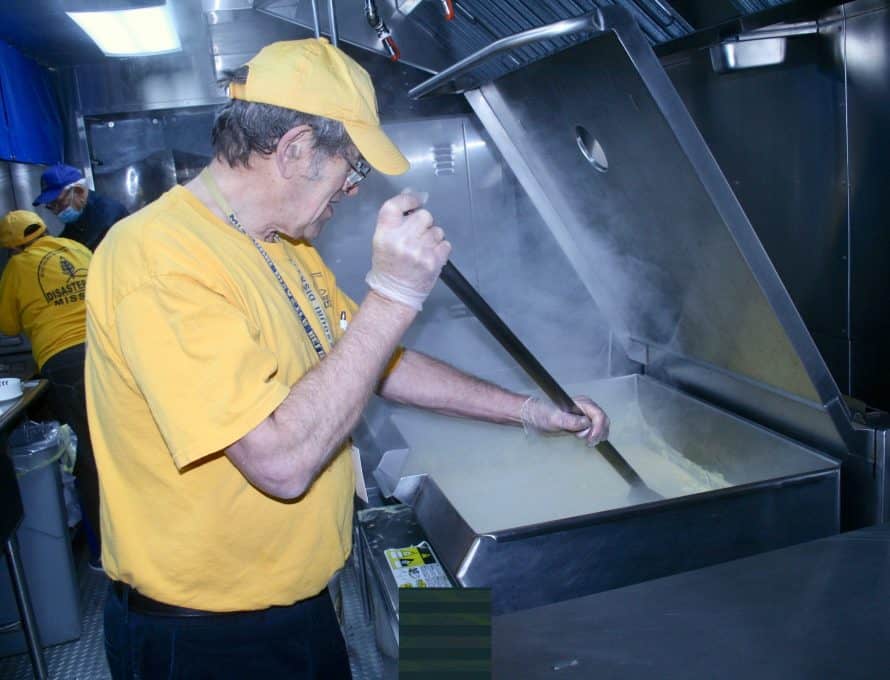 HANNIBAL – Russell Brownell of Maywood stirs a pot of potatoes in a mobile kitchen during a Disaster Relief training event here, March 5. The potatoes were served as part of the DR trainees’ dinner that evening. (Pathway photo by Dan Steinbeck)

State Disaster Relief Director Gaylon Moss said the current assessment part of the ministry is being worked into a stand-alone ministry. This means that trained assessors could be first in to a disaster area without having to attach to a crew.

Moss also introduced Richard Nations, the Thousands Hills Director of Missions and Pathway writer who will serve as public information officer for DR.  Nations said this would help get the word out about the DR ministry and be a way to contact hometown media of responding volunteers.

Ninety people were trained in a new discipline or recertified in an existing one. There was at least one representative from all eight regions of the state. Bethel Association Director of Missions Al Groner said that was unusual for all regions to be represented.

Understandably, the northeast region had the best representation.

Some participants may have been part of teams going to Kentucky for flood relief the day after the Hannibal training ended.

Groner told how his interest in Disaster Relief began as a pastor in Mattoon, Illinois, where the church sent two buses to the Mississippi River to do sandbagging during one of the floods.

“If you go one time you will want to go again,” Groner told participants.

Groner encouraged participants to “step up to the challenge” of responding to disaster relief calls.

Maddie Atwell told about Disaster Relief internships for collegians. Applications can still be made until April 1.

Tommy Civils, pastor of Crossroads Chapel near Rushville traveled across the state for the March training.

“The St. Joseph area has been affected by floods the last two years. We’ve done flood response and mud out. Our church is a giving and caring church and we are in a position to help. I wish the younger men could sacrifice to help (on a call out) one week in a year.”

How Crossroads Chapel responded to past floods has paid off for the church.

“We had 10 new members to our 20-member church out of our flood relief (efforts),” Civils said.

“This is my first time with Disaster Relief. I’m trying to learn all I can,” Bryson said, adding he has been on church mission trips before and eventually wants to be a DR chaplain.

Hannibalian Michelle Todd, a member of Grace Covenant Baptist in Hannibal was a first-time participant and trained in communications.

“About seven years ago, a tornado caused damage to Hannibal-LaGrange. I talked to the people then in the communications trailer and finally decided I could do that. It’s been in my mind since then. I have a technology background and I’m here to explore purposeful (disaster relief) work. This (communications) is probably a good fit for me,” she said.