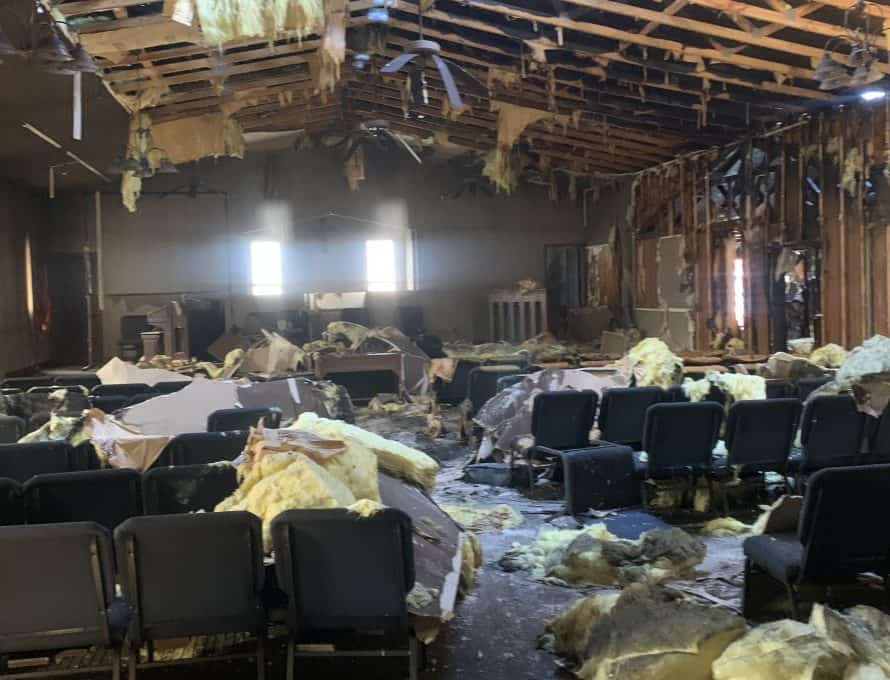 FRENCH VILLAGE – An early morning fire at Cornerstone Baptist Church in French Village appears to have destroyed their church building on March 12.

Bivocational pastor Doug Asbury was on his way to work as a carpenter.  He received a phone call from one of his church members that the building of the church where he also serves as pastor was on fire.

That was at about 6 a.m.  He received other calls that the fire was serious, and he turned around and drove to the church in the town of French Village, in eastern St. Francois County, 60 miles south of St. Louis.

By the time he arrived, smoke was still billowing out of the eaves of the building and there were 14 fire departments from across the region battling the blaze. Church leaders believe it has  likely rendered the church building a total loss.

Pastor Asbury said when he pulled up to the neighborhood he was amazed at how many different fire trucks were on the scene. He knew it was bad.

Chad Hodges, the director of missions for the Jefferson County Baptist Association, said the fire marshal is telling them they believe it was the result of an approximately 5:30 a.m. lighting strike which in turn led to a spark in a gas line which may have had a pin-point leak.  Flames shot up into the rafters of the church and the building appears to be unrepairable.

The building is insured. Currently church and associational officials are working to determine the best plan for the church’s future.

It is located near a gated community called “Goose Creek Lake” and the lake association maintains a recreation hall there which they allowed the church to gather in the following Sunday for worship.  Pastor Asbury said there are about 15 people attending the church.

He works for the O’Shea Brothers carpentry company, and he said there are many options available to the church if they are able to rebuild the church. He knows a lot of people in the building trades.

He said the church would like to rebuild but they will have to recruit a lot of volunteer labor to do it.  His carpentry experience will come in handy if that is the case.

“Many people in the community have come up to us and said they are willing to donate and to help,” he said.

Asbury added, “We were surprised by so many from the community who want to help us.”

They had an emergency prayer meeting on Saturday, the day after the fire, in the Goose Creek recreation hall.  “We prayed for about an hour,” he said.

“‘Faith’ as well as ‘faith and works” was the topic of his address the next day on Sunday. “We hope to see more than is even expected,” he said to the members.  “That is how God is.”

Hodges said there are many hurdles to clear with insurance matters and some $43,000 building indebtedness.  The association will help the small church as they consider whether to rebuild or relocate.  He wants to help them know how to best reach their community for Christ as they move forward.