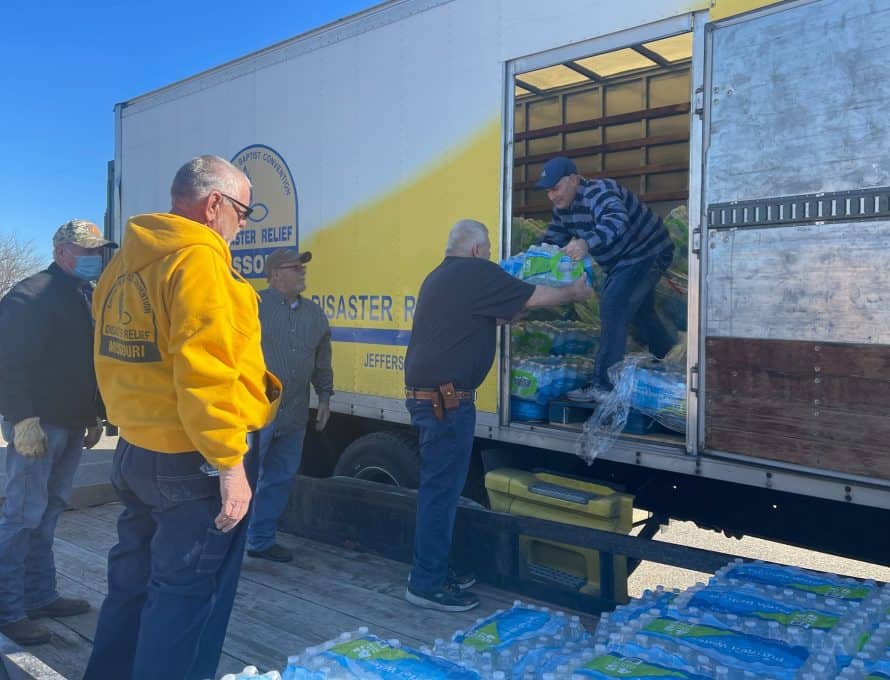 BONHAM, Texas – Missouri Disaster Relief sent truckloads of bottled water to Texas after a historic freeze shut down electricity and plumbing for many people there. (Missouri DR photo)

The low temperatures caused an energy crisis with power outages and water shortages.  Power companies were unable to generate enough power in the cold snap and so energy blackouts had to be instituted.  That in turn caused water supplies to be in shortage as water plants had to shut down.

Hathcock serves at the Fannin Baptist Association located about 75 miles north of Dallas.  Several churches in the Fannin association were recipients of a truckload of water delivered by MBC disaster relief workers in late February.

Truckloads of bottled water were sent in coordination with both the Texas Baptist Men (affiliated with the Baptist General Convention of Texas) and the Southern Baptists of Texas convention DR organization.

The New Zion Baptist Church, Bonham, was one of the drop off sites.  From that location water was distributed out to towns such as Leonard, Bells and Honey Grove Texas.

Hathcock said they experienced rolling blackouts in much of the county, which meant the power was off for 30 minutes or so and then would turn back on for 15 minutes.  But some communities, such as Honey Grove had total power outage for several days and the town water supply was out as well.

He said the Allen Point Baptist Church opened up their church facility to a nearby a nursing home which was without power.  The church had power and 25 residents of the home were relocated there for a few days, living in the Sunday school rooms.  The pastor of the church had previously led chapel services at the facility but had not been able to in recent months due to COVID-19 restrictions.

Hathcock also told of a lady in Leonard, Texas, who drove up to the First Baptist Church where they were delivering water.  She asked how much the water would cost.  The volunteer told her it was free and she burst in to tears of gratitude.  She said she had been looking all over for water and could not find any.  The DOM said “What a great way to share ‘Living water’ with those in need.”

In Bells, Texas, a pastor and wife, Rodney and Crissy Sprayberry, have been delivering water to public school teachers as they leave the school in the afternoons.  They reported they have been amazed at how much the people appreciate the water being provided to them in the crisis.

Hathcock added, “Thank you Missouri Baptists for your amazing generosity to make this happen!”

Missouri Baptist Disaster Relief released a statement indicating financial gifts are helpful to provide for disaster relief efforts such as this.  The need for water has been met but additional needs may arise from this winter storm such as tear out or plumbing repairs.   Persons interested in providing support can do so at https://mobaptist.org/dr/disaster-relief-donation/.