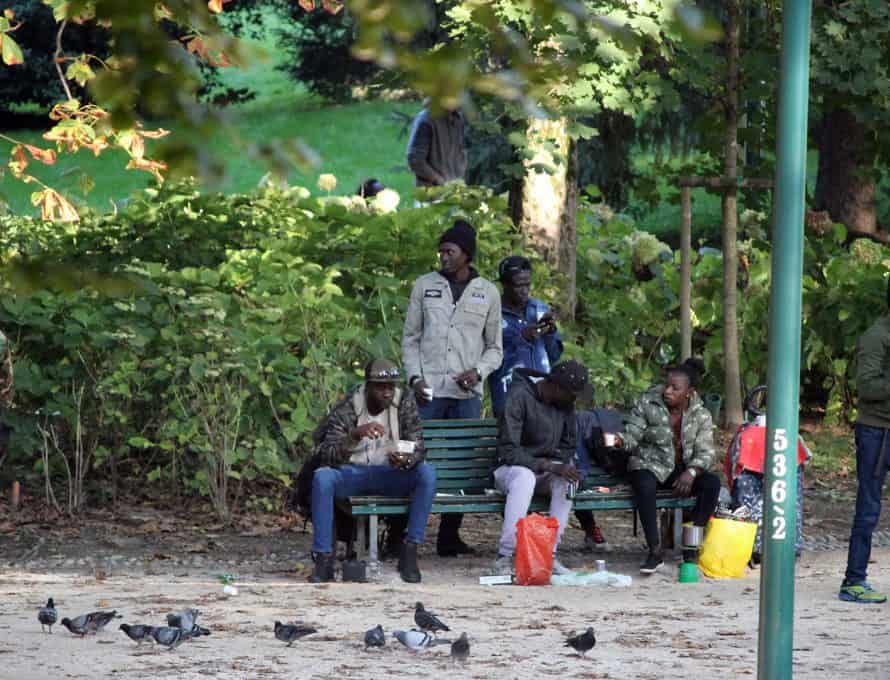 Gambians and Senegalese hang out in Parco Sempione in Milan, Italy. They are often found spending time together because they share the common trade language of Wolof. Young men make some money selling cigarettes and young women come to the park to sell homemade lunches to other Gambians and Senegalese. Homeless Africans who sleep in the park at night will occasionally be chased away. (IMB photo)

MILAN, Italy – The piazzas are empty. The selfie-snapping, sneaker-wearing tourists who normally frequent Milan’s historical squares are no longer visiting Italy due to COVID-19 restrictions. And, like the majority of the world, lockdowns keep citizens indoors.

Many refugees from Sub-Saharan Africa who live in Italy make their living by selling souvenirs to tourists. The tourism industry plummeted due to lockdowns and ongoing COVID-19 restrictions, and this took away the ability for many refugees to make a living.

IMB missionaries John and Nadine Overton* minister among refugee communities from Sub-Saharan Africa in Milan. Before moving to Italy, the Overtons served in Senegal and Kenya.

John said that a very small percentage of migrants in Italy from Sub-Saharan Africa receive refugee status. Those who do have a clear pathway to citizenship and legal employment.

“The vast majority of migrants from Sub-Saharan Africa are considered economic migrants. This means there is no clear path to legal residency or finding employment legally,” John said.

Unable to legally work, many refugees must find illegal means of work and are often taken advantage of, John explained.

“Because family in Africa have often sacrificed financially to send them to Europe, there is an expectation that they will send money back to help them survive in Africa,” John said.

Most refugees live in the cities surrounding Milan because rent is more affordable. They travel by train into the city center to sell souvenirs. During lockdowns, refugees no longer traveled into the city center, so the Overtons’ ministry shifted from meeting with refugees in tourist-centered areas to meeting at train stops.

After the second lockdown in Italy, the Overtons were no longer able to travel by train, so they began to look for homeless and hungry African immigrants who lived in Milan.

For months, when the city has not been under lockdown, the Overtons have handed out “dignity bags” to refugees. The bags contain warm socks, toothbrushes, toothpaste, lotion, tuna, crackers, fruit and wet wipes, as most refugees don’t have access to showers.

Evelyn, a woman from Nigeria, received a dignity bag from the Overtons. The Overtons met Evelyn when they were driving and noticed a woman holding a baby walking down the side of the road. They pulled over, learned her name, gave her a dignity bag and shared the gospel and prayed with her.

Like many refugees in Italy, Evelyn and her husband live separately. Nadine said to live together, couples must have paperwork proving they are legally married. Many refugees from Sub-Saharan Africa have ‘village marriages’ and do not have legal documentation.

Nadine said like most refugees, Evelyn shares her apartment with another woman.

“They were likely placed together as single moms for safety,” Nadine said. “It’s another glimpse into the challenges that refugees and immigrants face: no personal space, and the inability to choose whom you live among. Space is an issue.”

Many refugees live in camps and temporary housing while they wait for the legal documentation that enables them to work.

On their second visit with Evelyn, the Overtons met with her outside her apartment. It was raining, so Evelyn climbed in the back of the car with her four-year-old son.

“We shared the gospel with her and learned that she had attended church in Nigeria before coming to Europe,” Nadine said. “We asked if she would be interested in studying the Bible and she quickly said ‘yes.’”

Unfortunately, the Overtons have been unable to reconnect with Evelyn after the most recent lockdowns.

Many immigrants cannot afford to pay to recharge their phone credit and rely on free internet in public spaces. When Italy is under lockdown, the public Wi-Fi is turned off, and many immigrants and refugees struggle to keep in touch with family and friends.

“After repeated calls and texts to her, we haven’t heard from Evelyn in over six weeks,” Nadine said. “We don’t know whether her phone was stolen or lost, or if she hasn’t had internet access all this time.”

The Overtons are praying they will be able to make contact with Evelyn soon.

Nadine said in the future they hope to have a safe space to interact with refugees.

“It is our hope and dream to open up a global center that will welcome refugees and immigrants so that they can have a safe space to study Scripture, have spiritual conversations and study language,” John said.

“It’s essential that they have a place for spiritual conversations where they can speak and listen freely without their peers listening or discouraging them,” John said.

The Missouri Baptist Convention has an ongoing missions partnership in Italy.

(Caroline Anderson wrote this article for the IMB.)