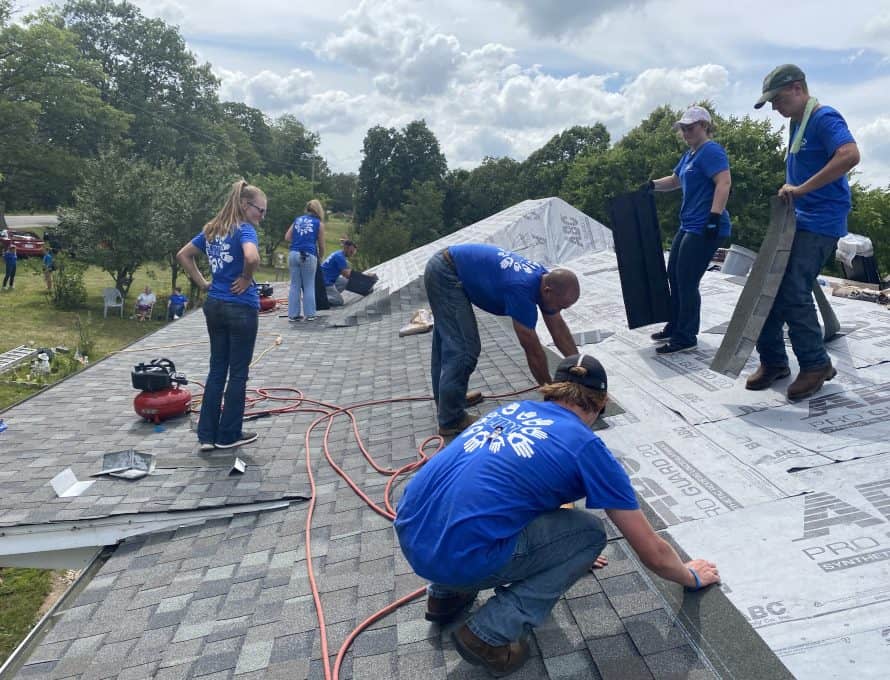 VIBURNUM – Church members at First Baptist Church here repair a roof to show love to the people in the community. (Photo courtesy of FBC, Viburnum)

VIBURNUM – Caring for the community prompted the growing ministry, “Love Thy Neighbor,” started by First Baptist Church of Viburnum.  “We wanted to establish a large-scale construction-based ministry for our community,” Justin Perry, pastor, said.

“Although we are a small, rural congregation averaging about 80 on Sunday, we’ve raised more than $100,000 since we began in 2015,” he continued.  “We’ve partnered with other churches in the community.  We’ve crossed to denominations with like faith.  We’ve partnered with a purpose of sharing the gospel with acts of kindness with those in need.”

According to Perry, last year’s ministry numbers included four new roofs, six decks and several other light construction projects.  The work was completed by 150 volunteers who paid $50 each to complete the work.

The ministry has fund raisers through the year.  For Valentine’s day, they sold $25 a plate tickets for a dinner at the church.  “We had a drive-through and many of those picking up meals gave us added contributions,” Perry said.

Both men shared the story of the widow with a six-foot hole in her roof.  She could not fix it herself and she did not have the money to hire someone else to do it.

“When we went in her home,” Perry said, “she had a 55-gallon drum inside to catch the rainwater.  The barrel had a spigot on it and when it rained, she attached a hose to it that drained the water out of the house.”

“It is kind of difficult,” Mayfield said, “to think that people must live like that.  It makes me happy that we can help those who really need it.”

In addition to contributing $50 for the week, many of the volunteers must schedule vacation time to serve.   “Reducing vacation time is one of the reasons that we schedule the week during the week before the fourth of July,” Mayfield said.  The 2021 construction week is scheduled June 27 to July 1.

“The impact of a group of Christians focused on what God wants them to do is amazing,” Perry said.  “We can do big things in small places.”

Perry went on to share the impact on another family.  “We connected with another family to put on a new roof,” he said.  “The wife contacted us because her husband was in the last stages of cancer.  She knew he wouldn’t be happy at first because he was a husband who liked to do-it-himself.”

“We finished the roof on Tuesday,” he continued.  “The husband addressed the crew and told them that he was at peace to know his family was protected with the new roof.  The husband passed away on Thursday.”

“This is what we need to do,” Mayfield said.  “We can show people Christ through our actions and love for them.”