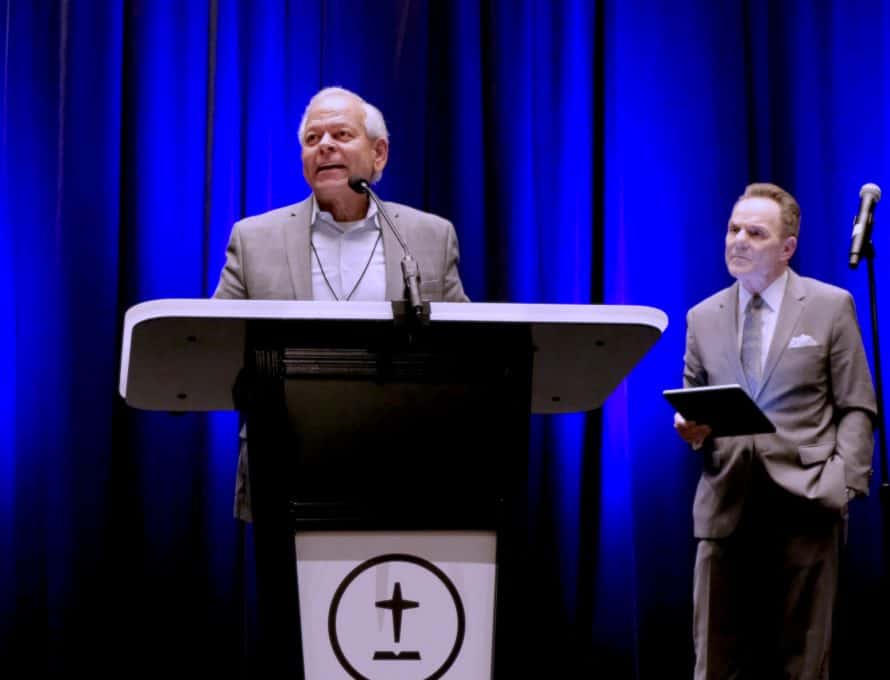 NASHVILLE (BP) – At the first in-person SBC Executive Committee meeting in more than a year due to the COVID-19 pandemic, SBC President J.D. Greear and SBC EC President/CEO Ronnie Floyd called for Southern Baptists to re-engage with a call to take the Gospel to the nations.

EC members also voted to disfellowship four churches cited in the Credentials Committee report, accepted amendments to the mission and ministry statement of Lifeway Christian Resources and received a report from the ERLC Task Force, established at last February’s meeting.

Greear, whose term as president extended to a third year due to the pandemic-related cancellation of the 2020 SBC Annual Meeting, set the tone with his Monday evening (Feb. 22) president’s address, in which he addressed “demonic” sources of division that threaten to hinder the SBC’s cooperative mission of getting the Gospel to the nations.

COVID-19 didn’t cause the disunity that has escalated largely through social media over the last year, he said, but uncovered it. Pointing back to the SBC’s rejection of the “leaven of the liberals” through the Conservative Resurgence, Greear called on Southern Baptists to reject the “leaven of the Pharisees” by refusing to be swayed by a vocal minority choosing to major on secondary issues.

“The problem is that many of our divisions are based on 90 percent misunderstandings, distortions and often outright lies. And it has grieved me more than you can imagine,” he said.

SBC EC President Ronnie Floyd called Southern Baptists to “lead the way in helping create a Bible-based, Christ-centered and Spirit-controlled culture in the SBC.” He then laid out five action steps for accomplishing Vision 2025 (See page 1 for further details).

EC Chairman Rolland Slade led fellow members, their spouses and guests in signing a large pledge board to pray for and promote Vision 2025.

Executive Committee members began their Tuesday (Feb. 23) plenary session in executive session to discuss the Credentials Committee’s report and four churches it determined to be out of alignment with Southern Baptist polity. EC members voted to disfellowship the following churches:

• Antioch Baptist Church in Sevierville, Tenn., due to knowingly employing a pastor convicted of statutory rape.

• West Side Baptist Church in Sharpsville, Pa., due to knowingly employing a pastor who is a registered sex offender.

Slade announced the EC’s decision after emerging from executive session, before other business matters were considered.

In other business, EC members voted Pastor Ron Edwards of First Baptist Church in Hamilton, Wash., to fill the Northwest vacancy for the Committee on Nominations. The most recent Annual Church Profile report shows that First Baptist contributes 12 percent of its budget through the Cooperative Program. EC members also voted for Don Currence to replace Kathy Litton as SBC Registration secretary. Litton resigned last month after her husband Ed announced his willingness to be nominated for SBC president. Another vacancy on the Credentials Committee was tabled until the 2021 SBC Annual Meeting in June.

No vote was required for the ERLC Task Force report received by the Executive Committee. During a question-and-answer period, EC member Richard Wilburn read into the record a letter by Stephen Stallard, lead pastor of Mosaic Baptist Church in Brooklyn, N.Y., in support of the ERLC and calling for a repudiation of the report. EC member Rod Martin noted what he described as positive accomplishments of the ERLC, but asked whether the entity might no longer be useful to Southern Baptists, considering the divisiveness of the subject matters it regularly deals with.

On Tuesday afternoon, EC members also voted to forward to messengers at the 2021 SBC Annual Meeting a motion put forward by the Committee on Convention Missions and Ministry to amend the mission and ministry statement of Lifeway Christian Resources. If the new guidelines are approved by messengers, Lifeway will move away from collegiate ministry responsibilities to an emphasis on next generation ministry, particularly Vacation Bible School and camps. Expansions of ministry include publication of books and Bibles as well as statistical and research materials for churches.

The amendments stipulate that Lifeway would no longer be responsible for operation of conference centers, Lifeway Christian stores, assistance to Christian schools or homeschool ministries, church architecture consultation and services or assistance in capital fundraising. Lifeway trustees approved the amendments last month.

“These ministry assignment amendments reflect a renewed focus for Lifeway on serving the local church and its leaders,” Lifeway President Ben Mandrell said. “We believe by serving the local church with laser focus, we will continue the reputation of being a trustworthy source for life-changing resources to assist believers as they take the Gospel to all people and make disciples.”

The Committee on Missions and Ministry announced the formation of a task force to be named by Chairman Rob Showers at a later date to study polity issues that arose when the Southwestern Baptist Theological Seminary trustee board suspended two of its members who were being investigated by the SWBTS board for misconduct.

In a report to EC members, Showers said the SWBTS trustee situation “revealed a need for clarity for all of our entities and institutions to deal with trustee misconduct.”

“… We need a clear path for our entities that will best serve the sole membership interests of the Southern Baptist Convention and the important needs of our valued entities and institutions in such a situation,” he said.

The next Executive Committee meeting is slated for June 14 in Nashville preceding the SBC annual meeting.