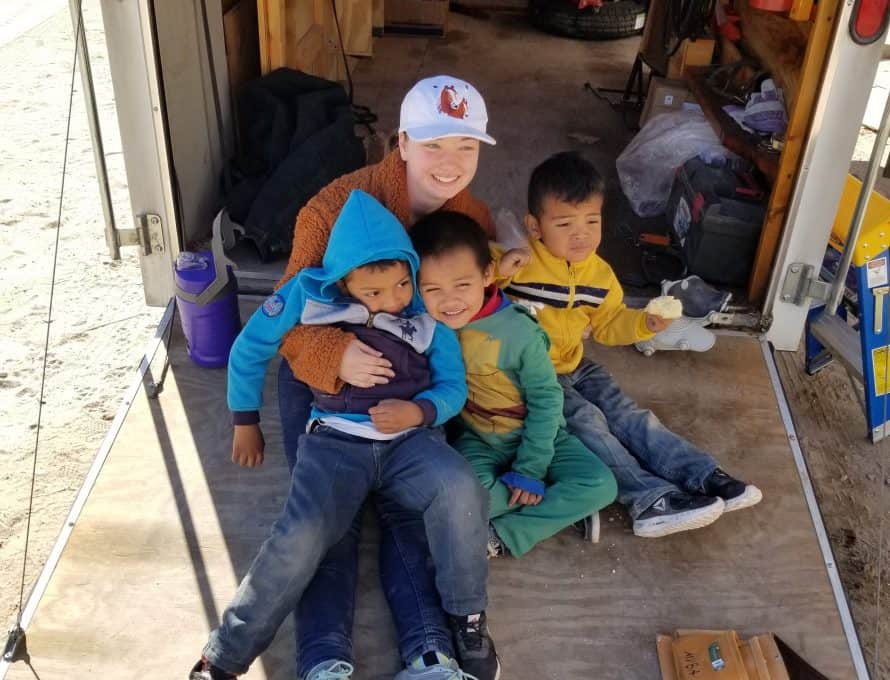 MEXICO – A global pandemic has stopped a lot of things, but it hasn’t stopped people from needing homes, and it hasn’t stopped MBCollegiate Campus Missionary Scott Westfall from helping build them. From Dec. 26 – Jan. 2, Westfall led a team of seven students and three other adults on his sixth trip to Mexico since March with Casas Por Cristos.

As usual, the team spent a week building a house for a family in Mexico, constructing not just walls but a bond that lasts well after the trip is over.

Two students from Campbellsville University in Kentucky came on the trip after hearing about it through friends. Senior educational ministries student Olivia Helm says she was “adopted” by the family they built the house for, forming a real and lasting connection that is extremely meaningful to her. “They were telling me that they wanted to adopt me as their own daughter and sister. They still talk to me almost every day…often I wake up to a text message that has encouragement in it and a reminder that I have another family in Mexico,” she says.

Nanette Gorsett, a Campbellsville graduate music student, describes the moment they handed the keys of the house to the family as being profoundly moving. “It was a special moment that I don’t really know how to describe,” she says. The fact that the house had a lock on the door “was a very big deal for them,” says Helm. “You could see the gratitude in their hearts and in their eyes.”

As mission trips often are, exposure to developing-world living conditions was an eye-opening experience. “We forget what other countries are going through,” Helm says. “We need to take a step back and realize how much God has given us, and we need to give what God has given us to others.”

God moved mysteriously to keep the language barrier from being a barrier. “Connecting with the family, it didn’t feel like there was a language barrier, even though there was,” says Liz Dye, a Missouri Valley nursing student. “It was amazing how much I remembered from taking Spanish in high school.” She and the rest of the team are now Facebook friends with the Mexican family. Thanks to Facebook’s built-in translation features, they talk frequently.

For Helm, who is a musician, she experienced a seamless transition from English to Spanish when she found herself leading worship spontaneously. “I’ve never really sang in Spanish,” she says. “My friend pulled up the Spanish lyrics to Oceans. The words came out so fluently.” More than a month later, she still finds herself listening to Spanish and learning more songs in Spanish. “It doesn’t matter what language we sing,” she says; “each one of them can glorify God.”

The team didn’t just leave with newfound relationships and the completion of a build. For Gorsett, though she loves construction and was excited to build, the trip was about so much more. “I found so much more joy than just that of building,” she says. “I left with deeper friendships and a thirst for God’s Word like I haven’t experienced in several years,” she says.

One part of the trip was anything but usual – the drive home, when the team encountered a blizzard in the middle of Texan desert. Stopped in a single line on the highway, they watched vehicles try to come through and end up in a ditch about a hundred yards away. “If it had been a different group,” says Dye, “maybe we would have laughed or mocked. Instead, we all got on our coats and hats and gloves and helped them out of the ditch.”

The group spent 17 hours stopped on the highway. While it certainly was not the return trip any of them expected, they look back on it fondly. “We actually made it through pretty easy,” says Westfall. Between playing soccer in the snow, pushing cars out of the ditch, playing games on their phones, attempting to sleep in close quarters, and having spiritual conversations, they made the most of the less-than-ideal circumstance.

“I don’t think there is anyone in the world that I would rather have been stuck in a van with for that long,” says Helm. “If I had to do it again, I absolutely 100% would do it again with those people.” When asked what her favorite parts of the trip were, Gorsett says getting stuck in the snowstorm was one of them. “Blankets turned out to be a really good souvenir to have bought!” she says.

“The coolest part was that could have been a really bad experience,” Dye says. But it wasn’t. “Our relationships were stronger by the end of the trip,” concurs DonnieRoy Slusher, a high school student who is being discipled by another team member and Missouri Valley Collegiate Ministry intern, Clayton Hazelrigg.

Once they were finally moving, Slusher found himself reflecting on the mission. “We traveled 15+ hours for our mission trip, but we are always on the battlefield, even right here where we live,” he says.

“The mission doesn’t stop when we leave,” Dye concludes.