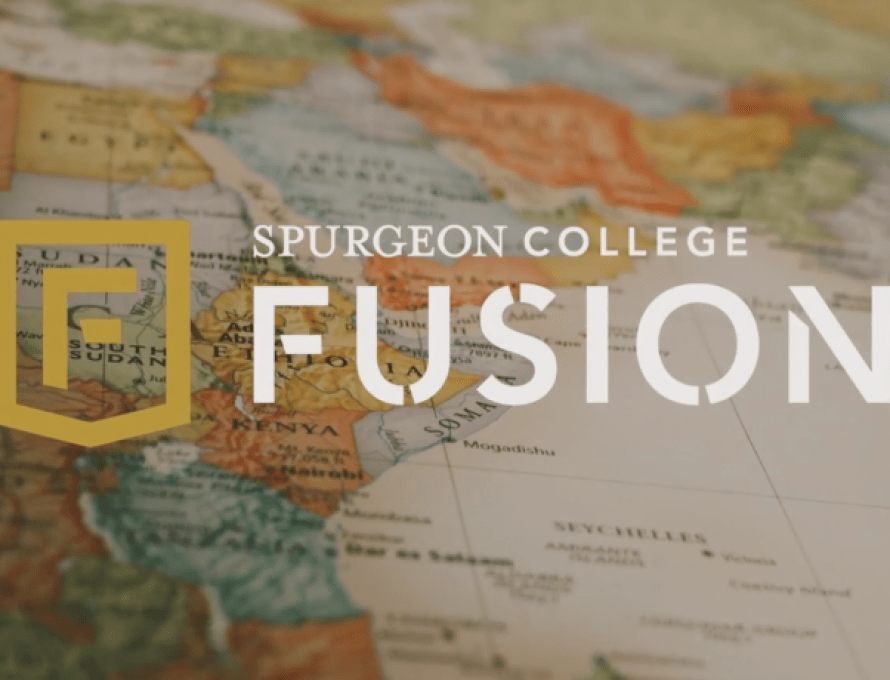 Image courtesy of The Spurgeon College

KANSAS CITY – According to the International Mission Board, 4.5 billion people live among more than 7,000 people groups unreached by the gospel. Preaching in chapel at Midwestern Baptist Theological Seminary (MBTS), Jan. 20, Provost and Professor of Historical Theology Jason Duesing told students, faculty and staff that every Christian should play a role in reaching these people groups with the gospel.

Duesing added that, until Christ’s return, Christians should refuse to get “distracted or displaced by present troubles” and keep in view the “grand end” of reaching all nations with the blessing of the gospel.

“Wherever we are called and wherever we live, we are to do it as world Christians,” he said. “We are to champion the end goal of the gospel and those who take the gospel to the ends of the earth.”

According to Fusion Director Erik Odegard, the Spurgeon College at MBTS remains committed to making “world Christians” through Fusion. Despite recent challenges raised by the COVID-19 crisis, the Fusion program plans to deploy 51 college students this April to work alongside IMB missionaries in hard-to-reach areas around the globe where few have heard the gospel.

Through Fusion, these students aren’t only deployed, but they’re also prepared to remain resilient no matter what situation might arise as they serve across the globe.

They learn first aid and wilderness survival skills, and they learn how to use transportation systems common throughout the globe. They receive security training, learning how to make contingency plans amid emergency situations.

They gain physical training and team building skills, and they’re challenged to grow as disciples of Christ. They study global languages, Scripture and missions.

They learn to pursue neither comfort nor success, but rather to pursue obedience to God in fulfilling the Great Commission.

Each Fusion student lives on campus with a cohort of other students, with whom they’ll serve overseas.

This disciplined regiment of training is essential, since no one can predict what might happen while serving overseas, Odegard said. In 2015, for example, six girls deployed to Nepal were thrown into an emergency situation when a 7.8-magnitude earthquake hit the nation. Yet, because of their training, they remained resilient throughout the crisis.

“And they were ready to serve again in the years that followed,” Odegard said. “They were prepared for it. … And at least a couple of those young ladies are looking to serve the Lord vocationally. One of them is looking to deply as a career (missionary) worker in just a matter of months.”

Like these girls, many students who go through the Fusion program intend to give their lives to missionary service. But even Fusion alumni who don’t serve on the field long-term help to mobilize church members in the United States to be “world Christians,” Odegard said.

Through the Fusion program, these students’ families and churches also gain greater concern for God’s glory among the nations. And that’s what it’s all about, Odegard said.

“It’s really about the glory of the Lord covering the earth as the waters cover the sea,” he said. “It’s about every nation honoring Christ.”

Odegard thanked Missouri Baptists for supporting Fusion through the Cooperative Program, and he urged them to pray for Fusion students.

To learn more about the Fusion program, visit https://spurgeoncollege.com/academics/fusion/.