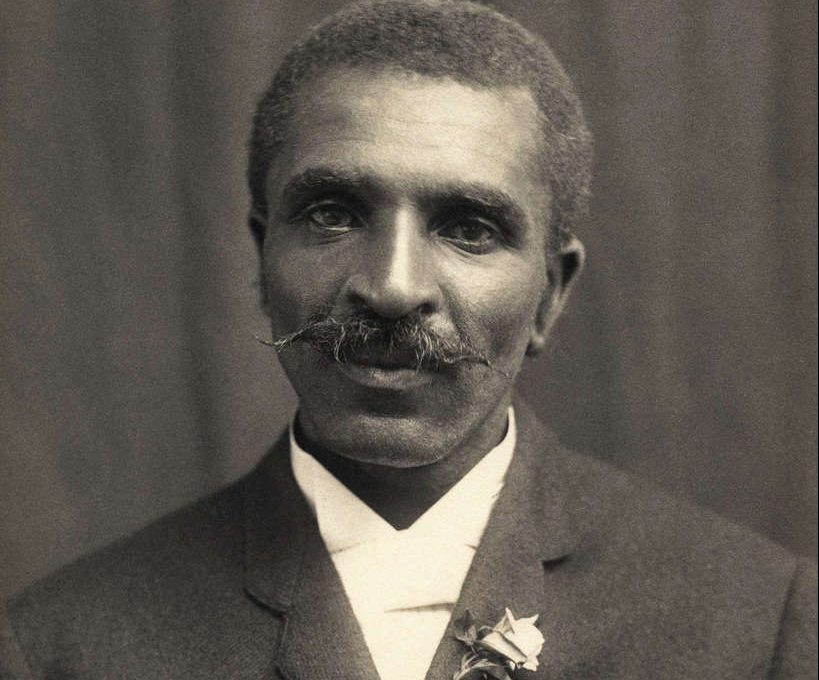 DIAMOND – Faith as small as a mustard seed can move mountains, the Lord Jesus once said. In the early years of the 20th century, walking through the countryside near Tuskegee , Ala., Professor George Washington Carver sought for a peanut-sized faith – and he hoped it would prove a boon for poor southern farmers.

The boll weevil, a beetle ruinous for the cotton plant, was moving north from Mexico and threatening the southern United States, where farmers depended primarily on cotton. For many years, Carver urged farmers to put aside cotton and grow other crops, especially sweet potatoes and peanuts. Not only were these crops rich in nutrients and protein, but they also restored the health of the soil.

In time, some farmers in the south began to take Carver’s advice. But, soon, they found themselves with a new problem. They had peanuts aplenty to feed their families – as well as bushels and bushels more, an abundance with no apparent use. What would they do with so many peanuts?

According to Carver’s early biographer Rackham Holt – whose book Carver reviewed before his death – the Tuskegee scientist long mused over these problems and took them to God in prayer. Carver “had a little story,” Holt writes, “in which he related his experience:

“I asked the Great Creator what the universe was made for.
‘Ask for something more in keeping with that little mind of yours,’ He replied.
‘What was man made for?’
‘Little man, you still want to know too much. Cut down the extent of your request and improve the intent.’”

Finally, Carver asked God to teach him all about the peanut, but even this was too high a request for the human mind. Calling Genesis 1:29 to Carver’s mind, God reminded him that He’d given mankind peanuts and other plants for their use. So God sent Carver back to the laboratory with a supply of peanuts in hand. There, Carver broke the peanut into its various parts: water, fats, oils, gums, resins, sugars, starches, petoses, pentosans, amino acid. Then he mixed the ingredients in various ways, sometimes applying heat or pressure to the mixtures.

The result? Hundreds of products developed from peanuts, everything from chili sauce, butter, milk and shampoo to shaving cream and glue.

Contrary to popular opinion, Carver wasn’t the first man to invent peanut butter. (That prize goes, apparently, to Canadian chemist Marcellus Gilmore Edson, who patented an early version of peanut butter in 1884.) But, according to the National Peanut Board, Carver’s discovery of more than 300 uses for the peanut has inspired many to call him the “father of the peanut industry.”

Moreover, Carver’s willingness to mix faith and science won the admiration of evangelicals throughout the United States.

Missouri-born son of a slave woman

Carver was born sometime around 1864 to Mary, a slave woman on the farm of Moses and Susan Carver in Diamond, Mo. Soon after his birth, bushwhackers raided the Carver farm, kidnapping both mother and infant. Moses Carver hired someone to search for them, but only the infant was returned. Sadly, Carver never knew his mother.

Nevertheless, “Uncle Moses” and “Aunt Susan” sincerely cared for the boy, raised him and taught him the value of hard work and thrift (lessons he carried with him through life). As best as they could, they also helped him learn to read.

From an early age, Carver delighted in the natural world and especially loved plants. “His faith very much grew out of his observations of nature,” Janet Benge told The Pathway. Benge co-authored George Washington Carver: From Slave to Scientist (Emerald Books, 2001) with her husband, Geoff.

“George often talked about God as the Creator,” she said. “And from a very early age, George was very involved in nature. His whole life, he took a walk every day before sunrise and collected specimens (of plants, rocks and insects). He would pray at the same time. So his whole experience of God was intertwined with this experience of nature.”

Rough road to an education, call to Tuskegee

The naturally inquisitive Carver soon felt farm-life too narrow, unable to satisfy the questions that absorbed his mind. With Moses and Susan Carver’s blessing, he moved to Neosho to begin his education at the nearest black schoolhouse. There, he lived with Andrew and Mariah Watkins, a black family who introduced him to regular church life and gave him a small Bible that he read throughout the remainder of his life.

Roughly a year later, around 1878, he moved to Fort Scott, Kans., to continue his education. But, one evening in Fort Scott, he saw a violent lynching that haunted him for years to come. In anger, a white mob had ripped a black man from the local jail. Ignoring the man’s right to a fair trial, the crowd beat him, hanged him and burned him. Helpless and horrified, Carver watched from the shadows. That night, he gathered his belongings and fled the town.

During the next several years, he wandered from town to town in Kansas, working to pay for school until he finally finished his high school education. He soon applied to study at Highland College, a Presbyterian school in Kansas. His application was accepted. But when he visited the campus to enroll for classes, school officials rebuffed his request, saying they didn’t accept black students.

Disillusioned, Carver continued to wander. For a few years, he moved out west to set up a homestead on the open prairie, but he eventually moved north to Iowa. Though he hesitated to reapply for college, he did so with the encouragement of friends. He first attended Simpson College and then Iowa State College. At Iowa State, he studied agricultural science and botany, nurturing and disciplining his lifelong love for the natural world.

As Carver’s skills grew, word of his scientific expertise made its way to Booker T. Washington, founder of the Tuskegee Normal and Industrial Institute in Alabama, a vocational school for black people. In a letter, Washington invited Carver to join Tuskegee’s faculty and form its department of agricultural science. Soon, Carver accepted the position, promising “to cooperate with you in doing all I can through Christ who strengtheneth me to better the conditions of our people.”

At Tuskegee, Carver impressed students not only in the classroom, but also in a Sunday school class that he led for decades. He routinely worked with local farmers, as well, teaching them how to plant crops that would give them better nourishment and a better profit. He urged all these men and women to avoid waste, showing them how to steward well the resources God had given them.

According to Gary R. Kremer, executive director for The State Historical Society of Missouri, Carver’s true contribution was as a conservationist. Carver felt it was a “religious obligation” to “maximize” God-given resources, Kremer told The Pathway. Even so, Carver gained national fame as he showed everyone – from poor farmers to U.S. Congressmen – the vast usefulness of a miniscule peanut.

As Carver publicized his scientific research in pamphlets and presentations, he never shied away from expressing his faith. In fact, in 1924, a reporter for the New York Times harshly criticized Carver for giving God credit as the “inspiration” for his scientific discoveries. “Men of Science Never Talk That Way,” the headline read.

In a rebuttal that was never printed, Carver expressed shock at the “gross misunderstanding” of his use of the phrase, “divine inspiration.” He argued, “Inspiration is never at variance with information; in fact, the more information one has, the greater will be the inspiration.” Carver defended his credibility as a scientist, but separated himself from “scientists to whom the world is merely the result of chemical forces or material electrons.”

This incident caught the attention of Bible-believing evangelicals throughout the United States, who felt their beliefs were under attack, especially following the 1925 Scopes Monkey Trial. Amid this antagonism between faith and science, they found in Carver “a scientist who [believed] that science depends on God.” In decades that followed, many Christian presses printed biographies about Carver that exalted his exemplary faith.

But, according to Kremer, Carver’s appeal to evangelicals has a touch of irony.

“I think it’s fair to say that he really is, in many ways, a very traditional evangelical Christian – because of his born again experience and his belief in the power of Jesus Christ to touch his heart and soul,” said Kremer, who is author of George Washington Carver: A Biography (Greenwood, 2011) and George Washington Carver: In His Own Words (University of Missouri Press, 2017).

“But he’s a little bit unconventional,” Kremer added. For example, while Carver affirmed the truthfulness of the creation account found in Genesis, he didn’t see any contradiction between the biblical account and evolutionary assumptions about the age of the earth.

But church historian David B. Calhoun, emeritus professor of church history at Covenant Theological Seminary in St. Louis, subtly questions claims about Carver’s unorthodoxy: “Carver was not a theologian,” he writes, “but he was a Bible student, and his ideas appear to fall well within what could be viewed as interdenominational Protestantism.”

In a letter of 1930, Carver expressed his faith in God and his wonder in beholding God’s handiwork with these words:

“The singing birds, the buzzing bees, the opening flower, and the budding trees all have their marvelous creation story to tell each searcher for truth . . . from the frail little mushroom, which seems to spring up in a night and perish ere the morning sun sinks to rest in the western horizon, to the giant redwoods of the Pacific slope that have stood the storms for centuries . . . Nature in its varied forms are the little windows through which God permits me to commune with Him, and to see much of His glory, majesty, and power by simply lifting the curtain and looking in . . . I love to think of nature as unlimited broadcasting stations, through which God speaks to us every day, every hour and every moment of our lives, if we will only tune in and remain so . . . I am more and more convinced, as I search for truth, that no ardent student of nature can ‘Behold the lilies of the field,’ or ‘Look unto the hills,’ or study even the microscopic wonders of a stagnant pool of water, and honestly declare himself to be an infidel.”

With this faith, Carver reminds evangelicals that God’s glory rings aloud through all creation – from massive stars to miniscule peanuts.