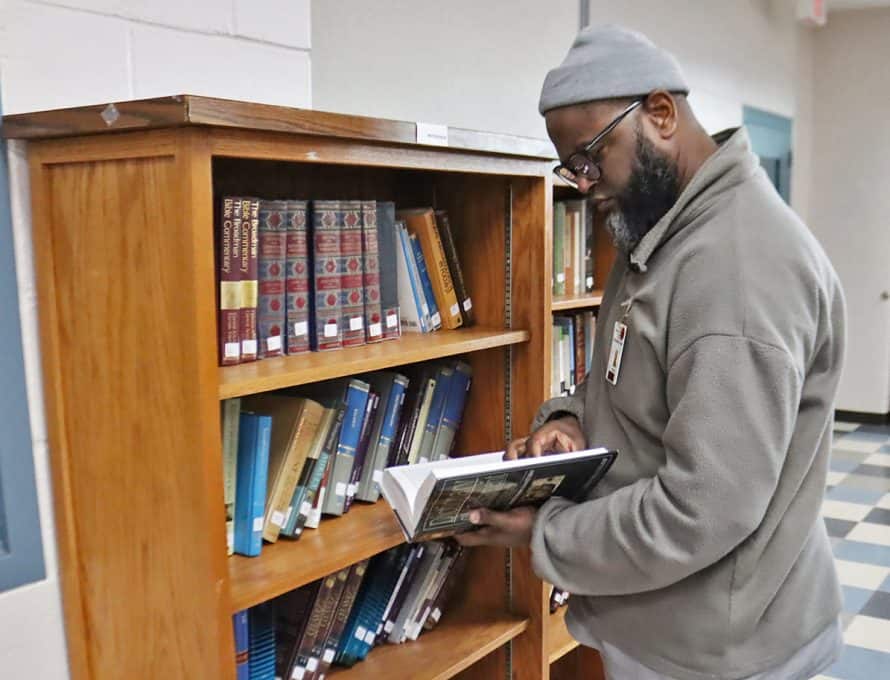 JEFFERSON CITY – Alex Robinson, a student in Hannibal-LaGrange University’s Freedom On the Inside program at the Jefferson City Correctional Center here, looks through theological books in the program’s library. (Photo courtesy of Freedom on the Inside)

JEFFERSON CITY – Imagine a typical university class of eager ministerial students, then imagine the same in a maximum security prison.

Rodrick Sweet doesn’t have to imagine: He knows both classrooms and sees little difference. His class at the Jefferson City Correctional Center (JCCC), he says, is all men and they’re all in uniform. Other than that, teaching in the prison setting for him isn’t so different than other college and university classrooms where he’s taught. 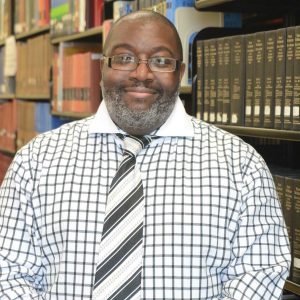 Rodrick Sweet, director of Freedom on the Inside

Sweet’s full-time class now is at JCCC where he heads the Freedom On the Inside prison ministry for Hannibal LaGrange University (HLGU).

Sweet feels safe teaching in a maximum security setting and says the challenges are often the same. For example, students still arrive at class tired after staying up late studying or watching a special event. Class engagement can be the same, too.

“We get the challenging questions we’d get in general classrooms at HLGU’s campus. We get well thought-out questions. We get eye-rolls when someone doesn’t like the answer.”

The similarities, he says, are because offenders at JCCC “were already engaging in religious practices and seeking to better themselves. We came along and offered them the opportunity to learn the Bible academically.”

Each weekday he’s at JCCC, helping 18 inmates of the class of 2024 toward their Bachelor of Science in Christian Studies degree—an accredited, four-year program.

The program’s purpose, Sweet says, “is to educate offenders with the skills of Bible, doctrine, theology, and preaching so that they will be able to turn around and be field ministers, or inmate missionaries.” Upon program completion inmates will continue to minister to others while incarcerated.

The degree program is the same HLGU teaches on its Hannibal campus. Up to 20 students at JCCC take five classes per semester, and Sweet is helped by two teaching instructors. Classes this semester include English, world history, hermeneutics (Bible interpretation), Old Testament history and spiritual discipleship.

Sweet says there is interest from offenders outside JCCC who want to transfer to the institution for studies. Soon, program and correctional administrators will begin vetting offenders for the fall class of 20.

The program began last August and has had an immediate positive effect on the prison population, Sweet says. People at the institution are noticing changes in the students.

“We’ve had several of our students launch their first church (in the prison).” He says, “it’s just a matter of time” before professions of faith happen because “some students are starting to ask important questions.”

“It’s amazing, isn’t it, that when we introduce the light of Christ into entities and organizations good things happen,” says Dr. Ray Carty, HLGU Vice-President of Institutional Advancement. Carty is in charge of finding financial support for the self-funded program.

The Missouri Department of Corrections (MODOC) invited HLGU into the prison after evaluating the success of similar programs elsewhere. MODOC provides office, library and classroom space to HLGU.  It also accommodates students’ schedules for class and study time.

Freedom On the Inside is self-funded for several reasons. Federal and state laws make inmates ineligible for educational financial aid. Most offenders have limited monetary resources, Carty says. “Someone needs to help them…if we’re going to do the program.”

Freedom On the Inside covers the full cost of student tuition, textbooks, and computers.

“We wanted this to be a separate ministry,” Carty says, so funds from HLGU’s tuition-paying students were applied to their education.

“We need other people to come alongside the program who see the benefit of introducing the light of Christ…into one of the darkest areas of our society.”

The program costs about $175,000 a year. First year funds contributed by the MBC and other sources were mostly one-year contributions. Individuals, churches, or organizations interested in financially aiding the program can contact Carty at HLGU.

A theological library has been started to support the program, and HLGU needs more texts. Theological book donations can be sent to the HLGU library and marked for Freedom On the Inside.

Additional qualified college instructors are desired for general education, Bible, and theology classes. A master’s degree is a requirement. Interested educators can contact Sweet through HLGU.

“Pen pals” to write students with encouragement or mentor them would be helpful because students, Carty says, “are at different levels of Christian maturity. They need some encouragement.” Interested persons can contact Sweet for more information.

“It truly is a ministry,” Carty says. “God tells us in Scripture not to forget the people in prison. We’re about that because (offenders) can be an influence.”