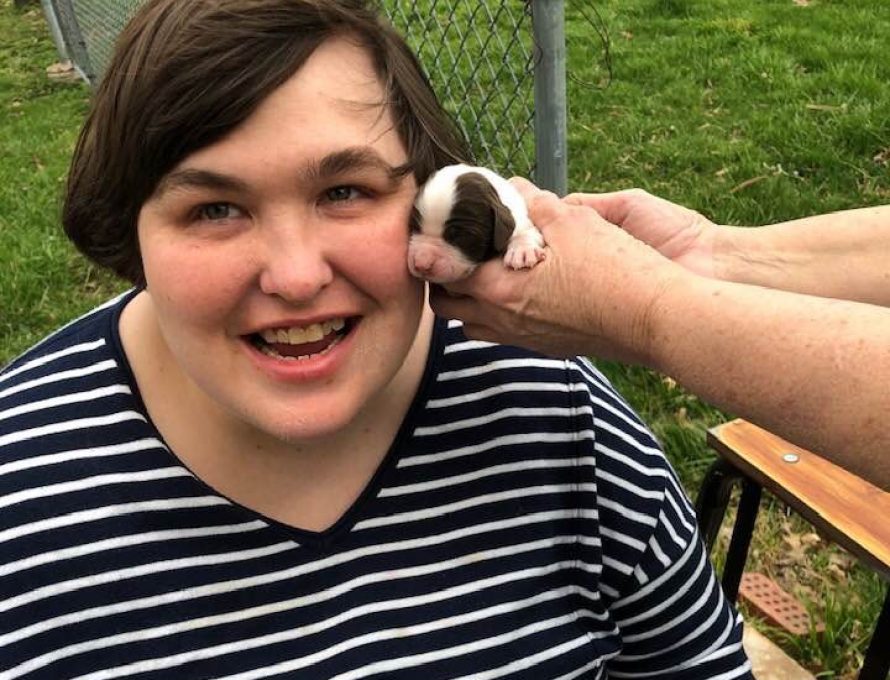 Amber Satterwhite is introduced to a new puppy. (Photo courtesy of the Satterwhite family.)

KAHOKA – Amber Satterwhite was doing well as a teenager, despite being – as her parents said – a“brittle diabetic.”

“She was editor of her yearbook, a straight A student. She had managed her diabetes since age 5 and gave herself shots. She was having a very successful life as a teenager,” her father Ron Satterwhite said.

“She had 200 kids at her 14th birthday party, played percussion and cello, and won some art awards. Amber was well liked and well loved. She said, ‘I’m Amber Satterwhite and I have Juvenile Diabetes.’ She was educating the kids,” said Ron’s wife, Melody.

“We had a beautiful Norman Rockwell ministry in South Carolina,” Melody said.

Everything changed Nov. 2, 1995, when Amber began seizures in the middle of the night. Two shots by the family to restore the low blood sugar didn’t work.

“Overnight,” her normal life “was taken away,” Ron said.

After five hours of seizures and treatment at two hospitals, she was medicated into a coma. Amber was diagnosed with severe traumatic brain injury.

“(The doctors) said the brain short-circuited due to low blood sugar and a lack of oxygen. They told us not to expect her to walk, talk, eat or live past six months,” Ron said.

“They said ‘go ahead and pull the plug and donate her organs because of low brain activity. She’ll atrophy. Put her in a nursing home, and get on with your life,’” Melody recalled early doctors saying.

After agonizing over the decision, the family rejected pulling the plug.

Twenty-five years later, Amber, 39, lives, but is not the same person. Her life is a shadow of early expectations.

She eats, talks, and walks.

Those who said she’d remember nothing might be surprised to hear her sing her favorite hymn, “I Love to Tell the Story.” She loves her dog and another dog at Wider Opportunities, a place for developmentally disabled adults in LaBelle. She also enjoys OATS transit bus rides and gushes teen-like appreciation to its drivers.

At times she must be prodded to do simple things, as one would do with a toddler.

“Parts of the brain cells are still stunned,” Melody said.

“(But) She’s a joy. She’s a lot of fun. She’s more than a child with a handicap. We tell our story not to get pity, but to give hope,” she added.

The ‘fun’ is mixed with hard times for the family. Amber may wander on her own, and may stop when family tries to coax her to move. Sometimes, she screams suddenly and shows a lack of patience.

“We parents have to step back and calm down and remember God will get us through this. Sometimes we have to shut down and let her figure things out,” Melody said.

“We see miracles on a daily basis. She can put her head back and raise her hands (in praise),” said Melody, who is finishing a book Amber Waves of Grain: Bent but not Broken. No release date has been set.

A life-sized cutout of the Wizard of Oz lion is in Amber’s room. As she goes to bed, she’ll say to it: ‘Goodnight Lion, I love you, Lion. I have courage, Lion.’

Melody saw Amber standing in front of a flag and mumbling once. As Melody got closer, she heard Amber saying the ‘Pledge of Allegiance,’ something she can say by herself at Wider Opportunities. Amber once connected the idea of the stars on the flag to a phrase from “How Great thou Art.” (“I see the stars; I hear the rolling thunder…”)

The Satterwhites are realistic about the future. “Ron and I know she will not be with us forever. Until God takes her home, we’ll care for her. She could have (deadly) seizures or choke on food, or (contract) COVID. But God has His protective hand on her. We take it one day at a time,” Melody said.