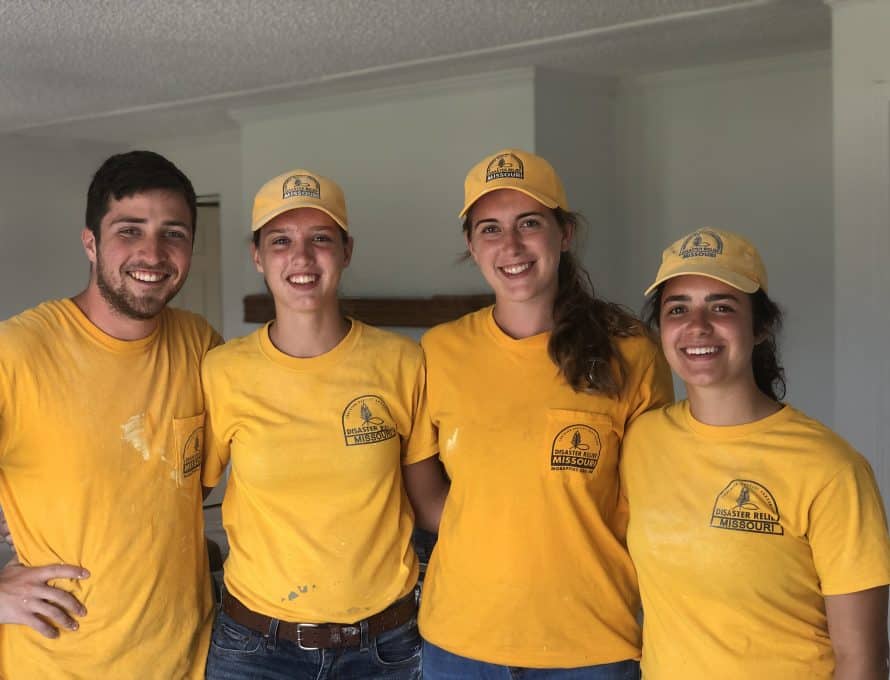 LEVASY — Students from the MBC Disaster Relief collegiate intern team helped clean out a home of a retired science teacher and they bonded with her in a special way over the gift of rocks from her mineral collection during the flood clean out effort. Shown here are (left to right): John Ezell, Madison, Auer, Sara McDonald and Taylor DiGiacinto. (Photo by Maddy Atwell.)

LEVASY – When Missouri River floodwaters entered Judy Oetting’s home in June 2019 she wasn’t sure what she would do.  When the waters receded she and others started cleaning up the mess.  Her basement was flooded as well as the first floor of her home.  Mold was growing behind the walls.

Missouri Baptist Disaster Relief (DR) volunteers came to her aid.  They sent 5 college students who were serving as DR interns that summer.

Mrs. Oetting said, “I wondered if we would ever be able to live in it again.  We had no flood insurance.  And then they appeared.  I’d never heard of the Missouri Baptist disaster group before.  They set me up with the most beautiful group of young people who had volunteered and given up their summer to help others.”

She added, “My first though was ‘Oh my, how on earth are they going to be able to do this nasty job.  But they did it and they did it with smiles on their faces…”

The student volunteers, John Ezell, Madison Auer, Sara McDonald, Taylor DiGiacinto and their leader, Maddy Atwell, pitched in to remove wheel barrels full of debris from the basement and damaged walls, carrying it out to the road in front.  They sanitized the walls and cut the drywall back to above the flood levels—getting it ready for a contractor to come in and replace the walls.

Oetting said the students finished the work, and gave her a Bible as they surrounded her and prayed for her.  She had them write their names on the inside of the now gutted walls and they wrote a favorite Scripture by their name.

“I can never tell anyone about this without tearing up.  It was a precious moment,”  Oetting added.

She is a retired science teacher from the Buckner area.  One thing the students noticed was her extensive rock collection.

One student, Taylor DiGiacinto, was a geology major at Missouri S & T University in Rolla.  DeGiancinto was admiring the fossils, gems and crystals and Mrs. Oetting kept giving her rocks from her collection to share as gifts with the team.  They really bonded as the team kept encouraging her and praying for her every day.

Maddy Atwell, the MBC collegiate DR coordinator said, “It was the first experience these students had with flood recovery following their training that summer.  Mrs. Oetting was kind and always seemed glad to see us.”

“Her husband was having memory issues and Mrs. Oetting had to keep explaining to him why all these changes were happening to their home.”

“The students were overwhelmed with her generosity in sharing her rock collection with us,” Atwell said.

Later that next spring Mrs. Oetting invited the team to an event called the Kansas City Rock Show, where she had an exhibit to teach children about rocks.  Part of the team stoped by her booth to see her at the show.

A portion of this story was told in the promotional materials of the Missouri Mission Offering (MMO) last fall.

Mrs. Oetting sent a letter to Rob Phillips at the Missouri Baptist Convention a few months ago to thank the DR team once again.  She enclosed a generous donation which was received for the MMO. Missouri Baptist DR receives a portion of those MMO funds.

Mrs. Oetting said in her letter, “The world needs more young people like this, especially now with this pandemic and all the crisis occurring throughout the country. So, I am donating $500 in honor of my five young people.  May God bless your endeavors.