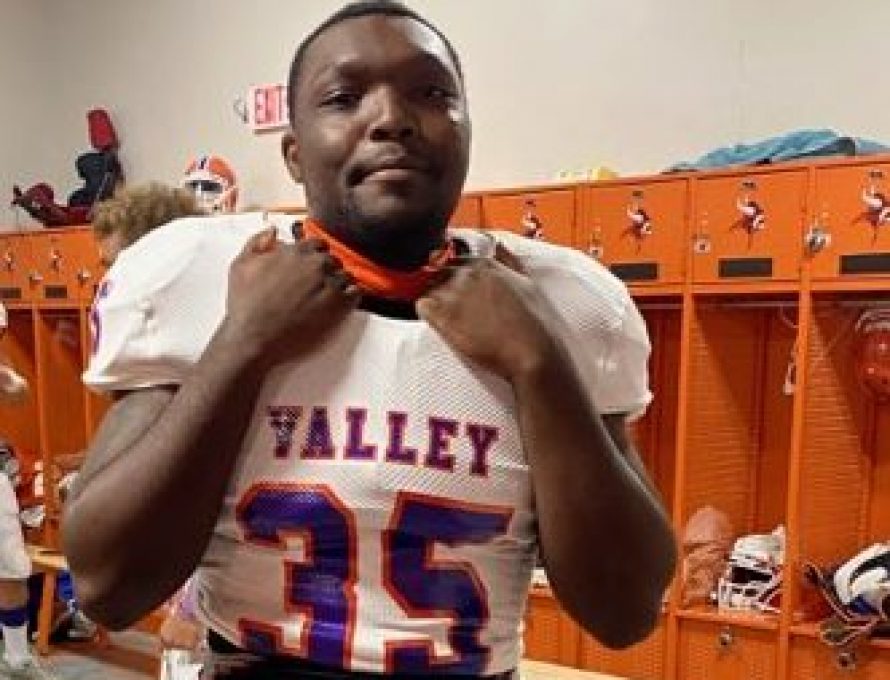 MARSHALL – Cedric Davis came to Missouri Valley College here to play football, but since he arrived he has played his part in Kingdom work on campus.

MARSHALL – When Texas born-and-raised Cedric Davis arrived at Missouri Valley College here on a football scholarship in the fall of 2019, he didn’t know a soul. He just knew he was supposed to be in Missouri. A year-and-a-half later, the answer to why is clear, and it has little to do with football or his degree.

Davis didn’t grow up going to church but became a Christian his junior year of high school while singing “No Longer a Slave to Fear” at a winter youth retreat. “I burst out in tears,” Davis says. “It was like the blinders fell off my eyes.” He got baptized and was quickly thrust into leadership roles at his church, serving at young group, practicing spreading the gospel, and serving in kids ministry throughout the rest of high school. “I went to school with a servant mentality, telling people the gospel and how God loves them,” he says. “That helps me grow in my faith as far as being a doer of what I say.”

During the recruiting process, he was offered scholarships to schools in Missouri and Texas. “I prayed about it. Nobody wanted me to leave Texas. But I knew I was supposed to be in Missouri.” Westminster was his school of choice, but the day before signing day, he found out the funding was less than he had expected. “My mom is a single parent,” Davis says.” We just didn’t have the money.” Since he had already turned down the other offers, “I had to beg for my scholarship back at Missouri Valley,” he says.

Like many new freshmen, Davis found himself lonely and depressed. He tried different churches but didn’t feel at home. One of his on-campus bosses, Marita Alvilez, offered to take him to her church. She and her husband began picking Davis up every Sunday for the thirty-minute drive to their church in Slater. “As soon as I got to FBC Slater, I felt home there,” Davis says. “They welcomed me with open arms even though I was the only young adult there.”

Davis had become adept at sharing the gospel and bringing people to church, but “now it was time to dig into the Bible and get the meat and potatoes,” he says. Attending FBC Slater “ignited a different level of relationship with God.”

One day, Alvilez introduced Davis to Scott Westfall, who was starting a new BSU ministry on campus and happened to be a former football player. “We talked for like two hours, had an amazing conversation,” Davis says. “After that, we were inseparable. If I wasn’t with Marita and Alex, I was with Scott and Rachel.”

The BSU ministry, called Missouri Valley Collegiate Ministry (MVCM), was in the early days of formation, with only a handful of students to start with. “We were worshipping off a little TV in the basement of a church,” Davis says. He found an outlet for his love of music through serving with the worship team. He also found his closest Christian friends, Makanalani (Lani), Faafetai (Tai), and Henry. “Not only did they help me grow in worshipping, but they held me accountable and taught me so much spiritual maturity,” he says.

As MVCM has grown and began making a tangible impact on the campus, God has been opening unexpected avenues of ministry for Davis. He’s had a front row seat to watching the campus transform. “The first semester on campus, nobody expressed their faith,” he says. “Now, I can see God moving on our campus.” Even his professors are noticing and asking questions.

Gifted with innate musical ability, Davis taught himself to play guitar. Now, “he’s giving guitar lessons to new students while at the same time engaging them with the gospel,” Westfall says. The music lessons “help get people involved in the ministry,” Davis explains. “Sometimes you have to use different approaches to reach people.”

Davis is also leading the Fellowship of Christian Athletes (FCA) ministry on campus this year. He was reluctant to make the commitment, but “it really only took one time,” he says. “I fell in love with it.” Though FCA started with only three students last year, they launched the fall semester with twenty-five who kept coming back and inviting others. They now have at least one student from every sport. “We had one person from dance the first week; by the end of the semester, we had almost the whole dance team,” Davis says. “I’ll have random people text me and ask about the Bible. Even people who don’t go to FCA will walk up to me and ask me questions.” Some FCA students have crossed over to MVCM as well.

Davis is “actively seeking to engage his football team with the gospel,” according to Westfall. Expressing his faith among his teammates has been challenging, but Davis is confident that God is working. “I might not be the one to make the flower bloom, but as long as I can plant the seed, that’s all that matters,” he says. His teammates call him “Pastor Man” and regularly ask him questions about his faith. He’s even been able to influence his coaches, who know how important his faith is to him. “We’re changing the course,” Davis says. “We never used to pray; now we pray before every game. It’s the little things.”

Managing life with his commitments to the football team, two on-campus jobs, his Special Education degree, FCA, and MVCM requires keeping a strict schedule, but “it’s not impossible,” Davis says. “If God gives me the power to do it, then I’m going to do it.”

Davis doesn’t know what the future holds after he graduates in two years, but he knows his work on campus isn’t done yet. “I feel a tug to stay in Missouri,” he says. “When Scott started the ministry, he said he had a vision to bring this campus to Christ. That vision has become my vision.” He plans to make the most of the next two years, pouring into students and leaving his footprint on the campus and in the community. “After I leave, I want it to continue to grow. You want to leave the place better than you found it.”

Football brought Cedric Davis to Missouri Valley, but that was just the beginning. “I thought I came to Missouri to play football, but I realize now it’s for something bigger,” he says. For Westfall, watching God use Davis is a discipleship win he celebrates wholeheartedly. “It brings me joy seeing students like him multiplying the kingdom,” Westfall says.