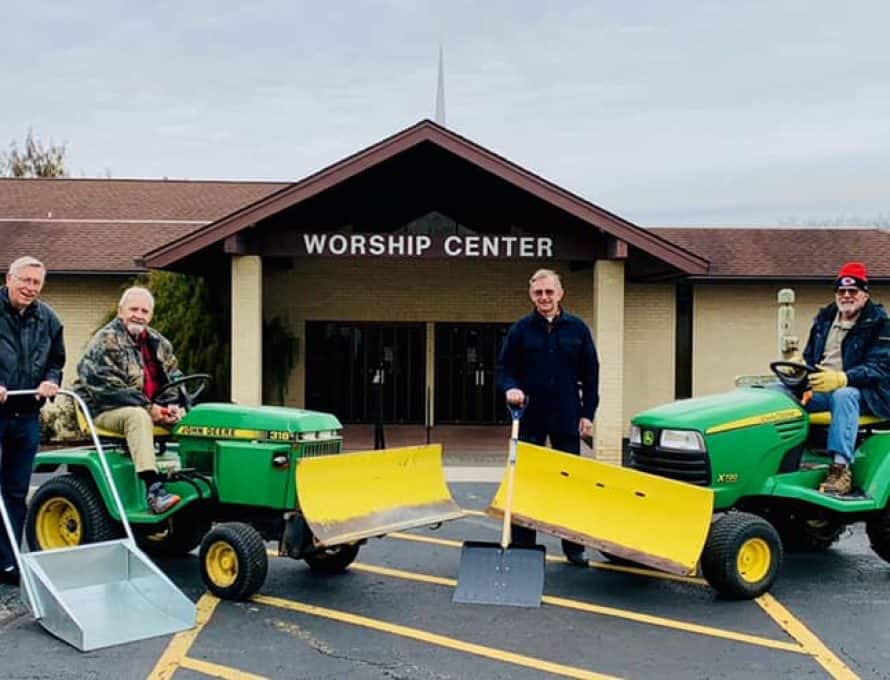 HOLT – In the winter there is a task to be done when it snows.  For some it is not a problem to get out and shovel the snow off of a sidewalk or a driveway.  Some have snow removal equipment. Others hire someone to do the job.  But for senior adults or those with disabilities, illnesses or single parents it can be a difficulty to deal with.  So the Northern Hills Baptist Church decided to offer snow shoveling to those who need it during the winter storms.

Jonathan Hayashi, pastor, said, “I am really proud of these guys.  Most of them are deacons They are doing what the Bible talks abut as “pure religion” in James 1:27 (ESV)

That verse says: “Religion that is pure and undefiled before God the Father is this: to visit orphans and widows in their affliction, and to keep oneself unstained from the world.”

Hayashi continued, “This is something we need to be known for.  They’ve been doing it for a while.”

Gary Tracy leads this ministry.  He said they have been doing it for about ten years.  “We do snow removal for anyone who cannot do it on their own—we will do it”

Tracy recounted that in 2012 it was a really snowy winter in western Missouri. “There was twenty inches on the ground by Christmas.”   He said they got out and started shoveling for the widows in their church. And they have continued that ministry.

They currently have a list of about 40 that they take care of regularly.  Many of these folks have long country driveways.

Tracy said they use a lawn tractor with a 4 1/2 foot blade attached.  Some of the men come along with snowblowers and shovels.  He said the men started the ministry with just a couple of guys. Now there are 5-6 men out every storm in Holt and nearby Kearny.  They run a couple of crews and knock of the jobs as they phone each other to update.

One Kearney area resident posted a note on the church’s Facebook page after an announcement of the free service, “Many years ago, as a single mom in Lathrop, this crew came up and cleared my driveway too. I was so thankful!”

The single mother, Patty Bergloff, now lives in Kansas City and she added, “As a single mom you have to pay for things or do them yourself.  You get tired of always having to worry about snow removal.  I remember that day (about ten years ago) they came to do my driveway.  The whole day just felt like hugs from God.  Someone had called the church (to request help for her).  I had no idea they were coming.”

Tracy says he and Joe Dayringer, another man from the church, both work on Missouri Baptist disaster relief teams and they were at a DR callout in Louisiana when the leader said, “If you can, you should.”

He said if there is an emergency they like to respond if they can and a snowfall leaving the driveway of a widow covered up is a reason for the men to mobilize.

The crew shares the gospel and they like to leave a little gesture of their love.  They have a supply of pennies that they have punched a cross in the middle of which they give to those they minister to.  “We hear about someone that gets one of these ‘cross pennies’ every now and then,” Tracy said.

“It is very revitalizing work,” he added.  “Not just because it is cold work but it is work for the Lord.  Pure joy,” Tracy said.

Hayashi said if anyone in their town needs help to call the church office and ask for the help and they will come and help them.  It is intended for widows, widowers, those who are sick or disabled and cannot get out during inclement weather.  The church phone number is: (816) 320-3301.