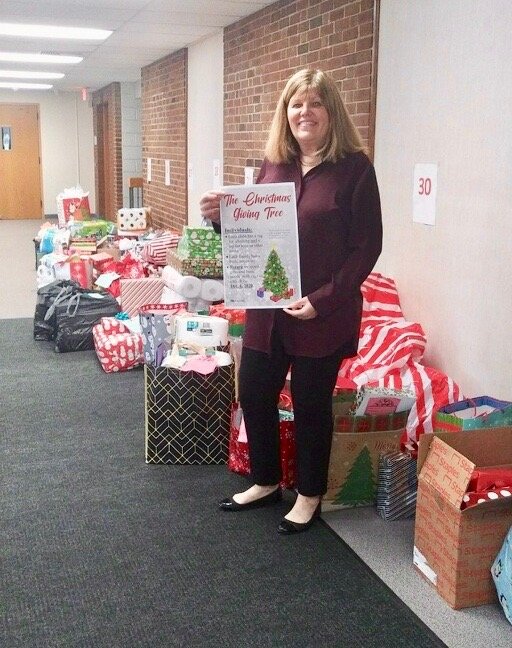 O’FALLON – One Christmas, a teenage girl hoped for an iguana lizard as a gift. So her name and request were put on the Giving Tree at First Baptist O’Fallon (FBCO).

The church partners with other local organizations in its annual Giving Tree ministry but Barb Bateman, an FBCO layperson, has since the ministry’s 1996 inception placed the names and children’s gift requests from area needy families on FBCO Christmas trees every November. Church members, small groups, and Sunday School classes fulfill the requests, which range from children’s personal needs—such as school supplies, beds, clothes, shoes, and coats—to hoped-for Christmas gifts like toys, games, books, and bicycles.

Bateman started coordinating the church’s Giving Tree ministry after a similar Christmas project was discontinued because no one volunteered to organize it.

“It is a lot of work, but I get so much out of it and have seen God at work in many different ways.” She’s learned that what one person sees as mundane another sees as answered prayer.

“One year we had a small family of a single mom and her son,” Bateman says. “When I brought in the basic necessity basket the mother started crying over the toilet paper. You would have thought we’d given her diamond jewelry.”

The mother explained she received one roll of toilet paper each week from her school janitor job. She’d forgotten her roll before the Christmas break and worried over how she and her son would get through the two-week interim.

A brother and sister took turns sharing a couch and sleeping with their mother because neither child had a bed. Bateman requested twin beds, which two widows supplied. When Bateman and her husband, Wayne, delivered the beds they discovered serious electrical problems in the family’s trailer home. Wayne, a construction contractor, decided to pay for the repairs and contacted an electrician for help.

Bateman said the Lord also works in miraculous ways through the Giving Tree.

A grandmother asked for a boys bike for a grandson named Jacob* (name changed), Bateman remembered.

And the girl who wanted an iguana? No one adopted that request and Bateman believed it was due to the expense of the animal and its cage. However, she still wanted to fill the request. However, she doesn’t care for lizards and wasn’t looking forward to the shopping.

“A few days prior to wrapping up the (Giving Tree) I got a phone call from a church member.  She had a friend who had a bearded dragon (lizard) with a cage and they wanted to get rid of it. ‘Would it work for the girl who wanted the iguana?’”

Bateman confirmed with the girl that the substitute was acceptable and put the two parties together. The exchange was made. Because both parties lived in Troy about 25 miles from FBCO, “I never had to personally deal with a lizard,” Bateman said.

HOPE receives support from about a half dozen area churches of different denominations. Every year it collects information on 60-80 families who need Christmas assistance. Supporting churches select families to help. Many of the HOPE families are unchurched.

For FBCO Bateman adopts approximately 20 families—which include about 70 children. She seeks out the larger families because as a larger church FBCO can more easily help those than some congregations.

She then creates two tags for each child – one for needs and the other for wants – and a tag for the family necessity basket.

That creates a minimum of 120 individual ministry “touch points” for FBCO each year.

“Some LIFE groups adopt a full family and the class works together on filling the needs. Occasionally, a family in the church will ask for a whole (Giving Tree) family. Our senior citizens participate by purchasing basic necessity items” that food stamps won’t buy, Bateman said.

“Overall we have tremendous support from the church family.”

Giving Tree items as well as those from all partner churches are consolidated at the nearby Christian Church. Families working through HOPE Food Pantry are assigned numbers, which correspond to pews at the nearby Christian Church. Recipient families arrive at the church, look for their pew numbers, and pick up their items. FBCO delivers directly to families not working through the pantry.

FBCO Associate Pastor of Gospel Proclamation Brandon Kiesling said the Giving Tree fits the church’s missions theme of Proclaiming the Gospel from Neighbors to Nations. “Our focus is to equip our people to be witnesses in our city, state, nation, and across the globe. The Giving Tree is a tangible way that our people can show the love of Christ,” he said.

Recipient families, he said, are often surprised by the generosity. That makes them more accepting of receiving the gospel message or ministry throughout the year “in hopes that they will come to the saving knowledge of Jesus Christ.”

Bateman starts prepping the Giving Tree ministry in October. Two Sundays before Thanksgiving a Christmas tree adorned with family tags is set up in the church lobby. It stays four Sundays with gifts returned on the last.

“In the early years I would sometimes worry about all the tags being adopted and how I would cover the costs for tags not adopted. I don’t worry about it anymore. I just let God take over,” Bateman said. “God has blessed this ministry year after year.

“I honestly know God (is) at work to make this all happen.”