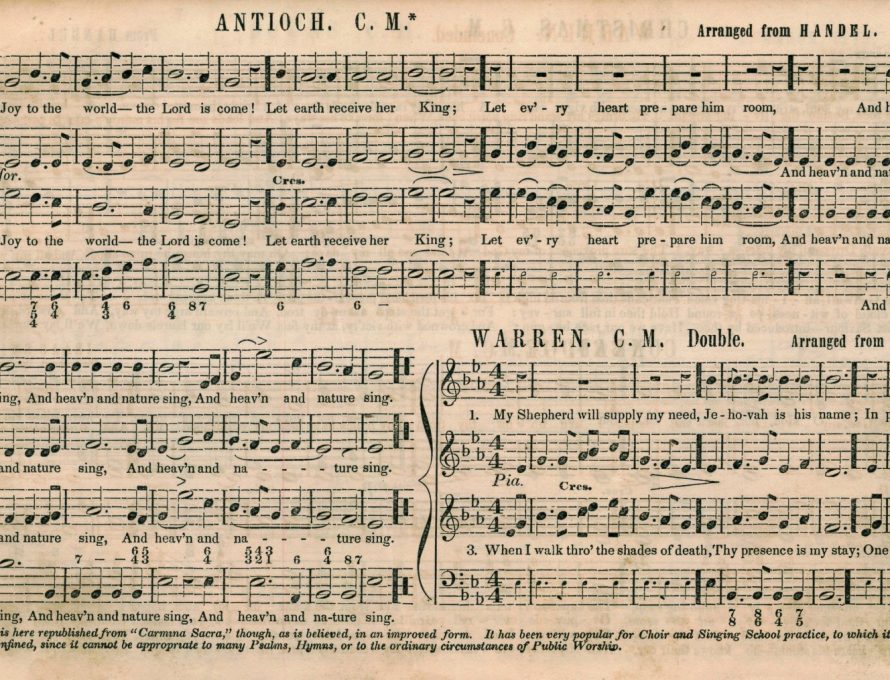 What is the most often sung Christmas hymn in North America? Here’s a hint: it was never meant to be a Christmas song. Well, if you said “Joy to the World” you are correct.

But even a casual glance at this favorite reveals much more of a Second Coming theme than it does a Christmas theme. Yet it is one of the world’s favorite Christmas songs of all time. If the question is “what makes it so great?” the answer may be found in two genius craftsmen: Isaac Watts and Lowell Mason.

“Joy to the World” was written by Isaac Watts and included in his hymnal, The Psalms of David (1719). But it was not titled as we currently know it. The 1719 title of this hymn was “The Messiah’s Coming and Kingdom.” The hymnal from whence it came The Psalms of David is very important as it was a book of hymns that were based off of the Psalms. Watts endeavored in this hymnal to be both creative and theologically intact in his interpretation. So the verses are naturally some Psalms versified. Stanzas one and three were based from Psalm 98, verses 4 and 9:

• “Make a joyful noise to the Lord, all the earth; break forth into joyous song and sing praises!” (verse 4)

• “… before the Lord, for he comes to judge the earth. He will judge the world with righteousness, and the peoples with equity” (verse 9).

• “Let the heavens be glad, and let the earth rejoice; let the sea roar, and all that fills it; let the field exult, and everything in it! Then shall all the trees of the forest sing for joy.”

Along with this reference is the curse from the fall of man in Genesis 3:17-19 that is intermingled through the great hymn.

So the Word of God does make for a great hymn. However, it wasn’t until the music was added that the carol took off. Enter Lowell Mason. This New Englander rose to be a paragon of American Christian music. His fascination for the Christian cause and the music of George Fredrick Handel, who gave us the beloved “Hallelujah Chorus” from the oratorio, Messiah, would be his source of inspiration. You see, for one-hundred-forty years the hymn text of “The Messiah’s Coming and Kingdom” floated around in relative obscurity, with no tune with which it was anchored. It was simply to be sung to any “common meter” song. However Mason took snippets of Handel’s music, from his above-mentioned oratorio and created a synthesized Handel tune which he named ANTIOCH, and attributed the tune to Handel. What’s more, he included it in his 1848 hymnal, The National Psalmist, and this is where this hymn/carol took off.

Genius work, by two men touched by God, both borrowing from the masters: Watts from King David and Mason from Handel. They were two men clearly favored by God. “Joy to the World” reflects a craftsmanship that really took millennia to emerge, rendering it timeless and good for all occasions. This is a song that is fine to sing at Christmas but also for anytime of the year “far as the curse is found.”