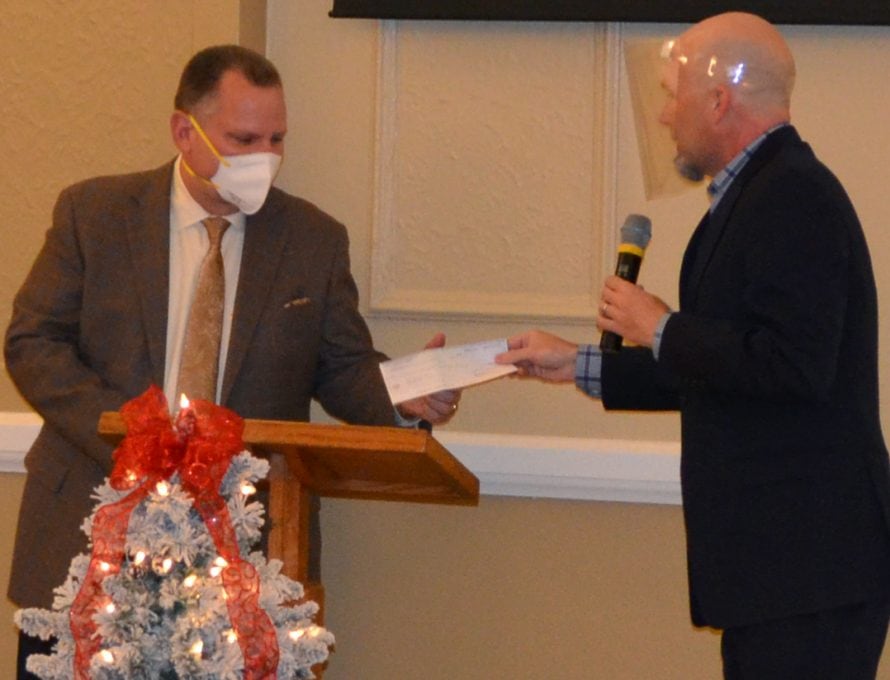 JEFFERSON CITY – Baptist Home Chairman Ken Parker receives a $261,900 check from Missouri Baptist Foundation President Neil Franks, Dec. 4. The check was a second distribution of a $1 million estate gift. It will be used to help fund the new care facility on The Baptist Home-Ashland campus. (Photo courtesy of The Baptist Home)

Neil Franks, president of the Missouri Baptist Foundation, presented the $261,900 check to Baptist Home Trustee Chairman Ken Parker during the meeting. Currently, TBH leaders plan to use the gift to help fund the care facility at The Baptist Home-Ashland campus.

During his report, Baptist Home President Rodney Harrison said the construction projects at the Ashland campus are on schedule. The congregate living building featuring one-bedroom, independent living apartments should be open and ready for occupancy by March 1, 2021. In addition, breaking ground on the new 60-bed continuum of care facility will also take place in the spring.

Harrison also highlighted several opportunities for ministry growth and expansion. Some upcoming goals for 2021 include the rebuilding of census at the Chillicothe, Ozark, and Arcadia Valley campuses. He shared that, despite a challenging year, The Baptist Home has plans for major improvements in campus renovations and deferred maintenance projects at the Chillicothe campus, as well as the expansion of low-cost independent living arrangements at the Arcadia Valley campus.

Karl Snider, vice president of operational resources, provided an encouraging financial report that reflected enthusiastic support of the ministry of The Home. He also shared of plans to streamline the accounting and payroll processes. These changes align with his expanded role that includes all inward focused initiatives, including facilities management and organizational stewardship.

In executive session, trustees approved the 2021 budgets for The Baptist Home and The Baptist Home Foundation, as well as resolutions regarding: new hospice initiatives; the authorization to sign contracts for the president, vice presidents and campus administrators; and various resolutions of appreciation to caregivers, Missouri Baptists and the Brown family. They also set the dates for 2021 board meetings.

United States Senators have a last chance to block threats to religious liberty brought about by the so-called “Respect for Marriage Act.” As such, faith-based policy expert