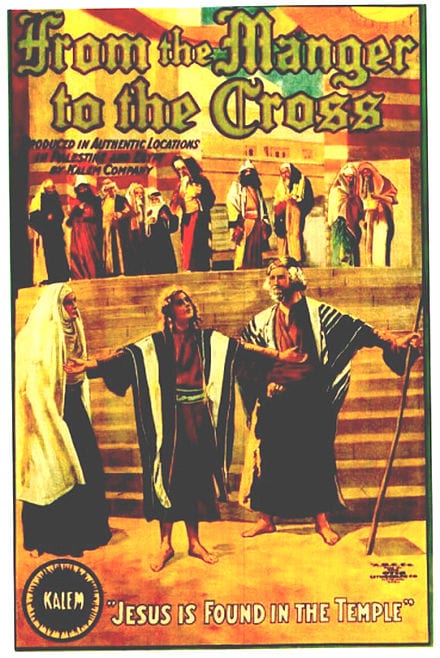 Viewers have better choices than this film, although it set cinematic milestone

EDITOR’S NOTE: Once a month in 2020, The Pathway examined a classic Hollywood retelling of a biblical story. To see all the Classic Movie Club entries, visit www.mbcpathway.com/movieclub.

There’s no doubt that ‘From the Manger to the Cross’ is an Important-with-a-capital-I piece of cinematic history. While the rest of the biblical epics we’ve examined this year came from the 1950s and 60s, this is the movie that paved the way, all the way back in 1912.

This black-and-white, silent telling of the life of Jesus Christ was truly groundbreaking at the time. At 71 minutes, it was longer than almost any movie. The filmmakers traveled to Egypt and what was then Palestine to be as authentic as possible. “From the Manger to the Cross” was a commercial and critical success, and its length and subject matter helped solidify the idea of the feature movie as legitimate art.

We only got flashier, bolder biblical epics because of the silent, dialogue-less and music-less “From the Manger to the Cross.” Indeed, you can see the DNA of future classics to come such as “The Ten Commandments” and “The Greatest Story Ever Told” in the static shots. Hollywood was learning how to  mine The Bible for its story, and this was an important first step.

As such, “From the Manger to the Cross” came long before Hollywood became obsessed with adding its own twist to the biblical narrative. Each scene is set with a placard of Scripture, and it doesn’t deviate at all. In fact, prior knowledge of Scripture is almost necessary since there is no on-screen dialogue. In that sense, it is refreshing to see a faithful retelling of the biblical account with no added subplots or characters. As the title suggests, we span the entirety of Jesus’s life and ministry. Interestingly, it doesn’t go beyond the cross: His resurrection isn’t seen.

I really do want to put on my movie critic hat and snobbishly explain why this is a must-watch piece of history and that “From the Manger to the Cross” should become part of your Christmas tradition. I just can’t. I can deal with no spoken dialog and slow pacing, but to sit in utter silence for more than an hour is very difficult. There’s a reason why we don’t release movies without soundtracks some 108 years later. It took me several tries to finish; you’d have to love movie history and technique far more than I to sit through the relatively short run time. If you care to watch it (it’s free to stream on Amazon Prime), please tell me why I’m wrong.

Instead, let me recommend a movie far flashier in comparison: 2006, “The Nativity Story.” This is a serious, very well-acted, yet still accessible and biblically faithful movie that the family has a decent chance of actually finishing.

Yes, but even it if weren’t, you’d probably doze off before you reached any troublesome scenes.