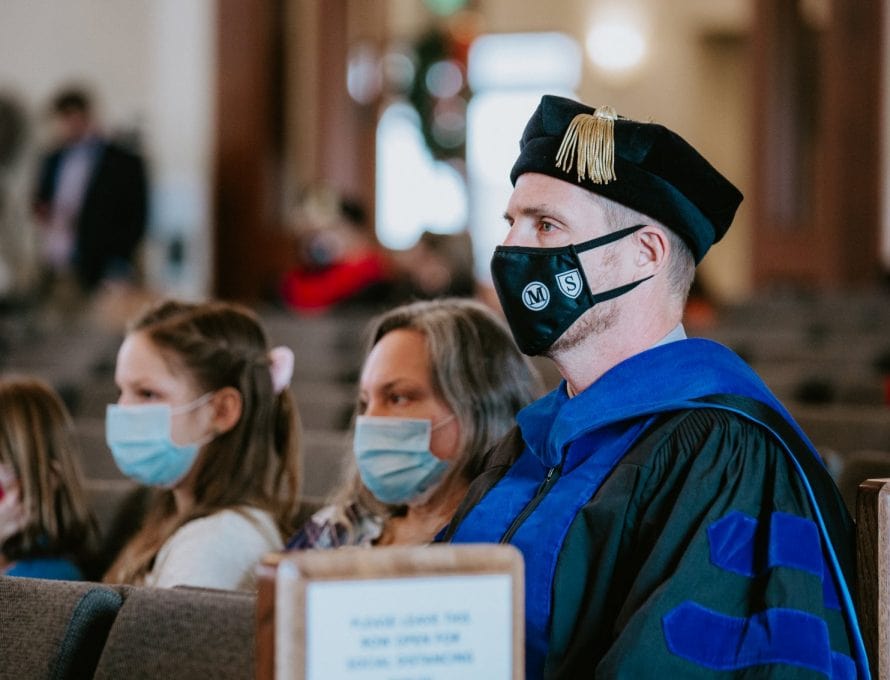 KANSAS CITY – The parking lots on Midwestern Seminary’s Kansas City campus were less cluttered this December, and fewer seats than usual were occupied in the Daniel Lee Chapel. Still, during four separate ceremonies spanning nine hours, the Midwestern Seminary community recognized and celebrated the accomplishments of its graduating students, as the school held its 68th commencement exercises on Dec. 11.

President Jason Allen reflected on the unique scene: “Historically this time of the year, our staff and faculty are managing end-of-the-year responsibilities with an eye toward celebrating our students’ momentous accomplishments alongside them and with their visiting family members.

“This year called for an audible in many respects. Yet we are grateful we still were given the opportunity to recognize our students and confer their degrees, even if the day looked atypical overall.”

In keeping with state officials’ advice and city-issued health guidance, pulling off the in-person ceremonies required creative thinking and adaptation on the school’s part. Students were allowed to invite a limited number of guests, and family units were scattered throughout the chapel to allow for social distancing. To limit the capacity in the chapel space at any given time, the proceedings were expanded from the traditional single service to four, and attendance was limited to students, their invited guests, and essential seminary personnel.

Midwestern’s commencement exercises began with an 8 a.m. ceremony recognizing students who earned certificates in the institution’s Contextualized Leadership Development program. A second ceremony was held at 10 a.m., recognizing doctoral graduates. Master’s and undergraduate students, along with individuals earning certificates in the Midwestern Women’s Institute, were honored in two afternoon services.

Two hundred and twenty-two students from the Fall 2020 graduating class were awarded certificates or degrees and were commissioned into ministry service as the next generation of pastors, missionaries, and ministry leaders. Additionally, a number of students from the Spring 2020 graduating class were given the opportunity to walk and receive their degrees. The seminary’s spring commencement ceremonies were pre-empted due to precautions taken in light of the coronavirus outbreak.

During the ceremonies, Midwestern also celebrated 39 Spanish-speaking students who earned certificates for completion of the seminary’s Contextualized Leadership Development program.

“The challenges facing these Midwestern and Spurgeon College graduates in the year 2020 have been unique to say the least. Yet we cannot be more pleased that these men and women have worked so hard and accomplished so much during their time with us,” Dean of Students John Mark Yeats said. “I am encouraged by our students’ resiliency and am thankful they are pursuing their calling. The perseverance and commitment displayed here bodes well for the future ministry activities each of them will be involved in for years to come.”

The day’s ceremonies featured a condensed version of the school’s traditional commencement exercises and included an abbreviated address from President Allen.

In his opening remarks, Allen acknowledged the effects of the pandemic on the proceedings but expressed hope despite them. “Indeed, this is an unusual commencement service. COVID-19 has clearly upended so much about our lives, even this morning, marking a limitation on our capacity to gather. Yet God’s grace is here and witnessed in this service.”

Allen’s address, entitled “First Things First,” focused on the priorities outlined in the Great Commission passage found in Matthew 28:16-20. “Commencement days here at Spurgeon College and Midwestern Seminary are moments to call us to faithfulness, resilience, courage, and focus in life and ministry. The Great Commission does just that.”

Further, Allen added, the current year gives warrant for a specific type of re-centering in one’s life and ministry: “Moreover, our ministry moment in the year 2020 calls us to remember and recommit ourselves to first things, to first priorities, to the first priority: the Great Commission. Both as individuals and as churches, as ministers and as ministries, the Great Commission pulls us upward and onward. It pulls us forward with focus, resolve, and with added momentum.”

The Great Commission passage is familiar to many and Allen noted the verses were likely the impetus for why many among the graduating class were sitting in the room. Yet despite its familiarity, the message of the passage is always timely. “It is always right to go back to the basics,” Allen stated.

“The Great Commission is God’s plan to reach the world for Christ. It is Plan A. There is no Plan B, regardless of distraction, attacks, fears, or even other intriguing opportunities.”

Allen’s explanation of the Matthew passage centered on the authority with which believers move forward into the world to accomplish their God-given mission.

First, Allen exhorted students to “remember the authority (they) have been granted.” In verse 18, Jesus stated all authority had been given to Him. This, Allen noted, has great implications in the lives of believers and for how our local churches are led. Ultimately, Christ leads the church. Employing a military analogy, Allen stated, “You can’t have rogue agents or independent decision-making. Everyone can’t be a general.”

Christ’s leadership and authority over the church is a great comfort as well. “The One who commands our respect and who holds all authority is indeed authoritative over all. Nothing can stop His church. No one can stop His will, nothing can stop His plan, from the outer extremities of the cosmos to you, your church, your home, and your life.”

What is more, the authoritative One in the passage calls believers to action, charging them to go in light of his authority and to make disciples.

Reflecting on the enduring command to go make, baptize, and teach disciples, Allen pointed out the startling reality of Christianity’s resilience over two millennia. “It is mind-boggling when you think about the Son of God issuing this call two thousand years ago, giving this Great Commission. His apostles, His followers had been scattered, struck down, and scared to death. Jesus appears before them, seals confidence in them, gives them this command and, in Acts 2, the Spirit comes and emboldens them.

“Here we are, two thousand years later, in a scattered chapel hall, reflecting on the Great Commission. Nothing explains that except the authority and power and promise of Christ.”

Christianity’s staying power is what makes it unique, according to Allen. He recalled ancient sects and religious groups that would surface and dissolve as quickly as they appeared. “But not Christianity. Two thousand years later, the church marches forward. And we, as His servants, get to be about the exhilarating business of preaching and teaching the gospel and doing the work of evangelism, fulfilling the Great Commission.”

Allen concluded his address by reminding graduates that this work is all done with the promise that Christ will be with them. “However the church seems to be doing century to century, season to season, region to region, He is with His bride.”

“As you graduates go forth from this place, He is with you. He’s not preoccupied with another galaxy, lacking time for you or your ministry. This isn’t a generic promise for generic people. This is a promise that can be made specific to us.

“If it were up to human ingenuity, human wisdom, human gifting, and human strategizing, the church would have run off the rails centuries ago. But it is Christ’s church, Christ’s promise, and Christ’s presence that is with us.”