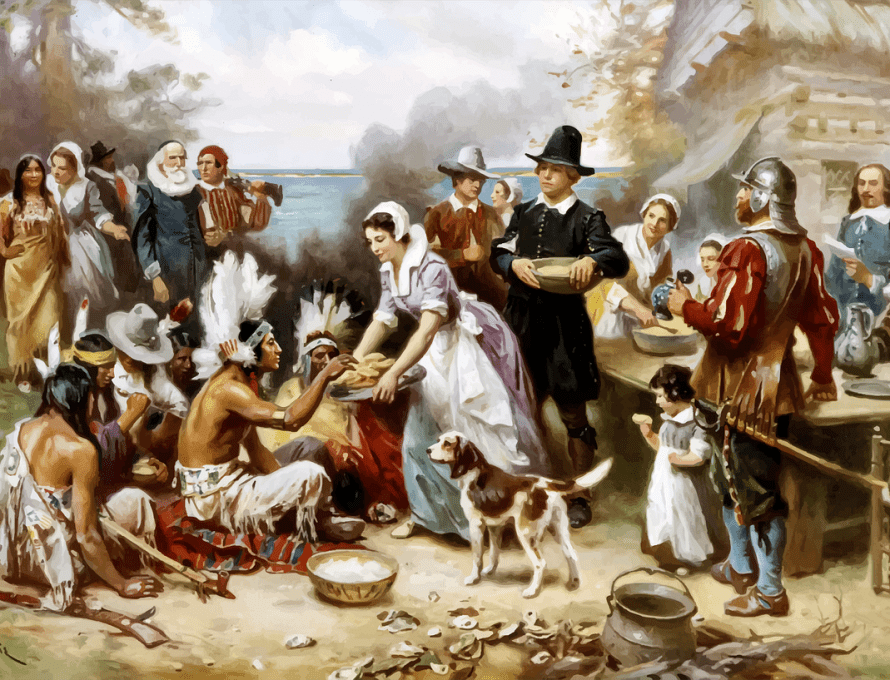 PLYMOUTH, Mass. – Sometime in the early autumn of 1621, a group of English colonists, now commonly called the Pilgrims, celebrated a feast in Plymouth, Mass.

But, according to Historian Robert Tracy Mckenzie, that celebration in the fall of 1621 didn’t much resemble the Thanksgiving feasts hosted in households across the United States today. After all, the Pilgrims likely feasted on ducks and geese, fresh fish, mussels, clams, or even some eels, alongside an Indian corn succotash as well as turnips, spinach, onions and other garden vegetables. There was also venison brought to the feast by the Indian chief Massasoit, who attended with 90 other men from the Wampanoag tribe. But no turkey, no cranberry sauce – and not even pumpkin pie.

But, doubtless, there was thanksgiving aplenty. The Pilgrims had suffered much grief and pain since landing on the shores of New England in 1620 – exactly 400 years ago from this November. The fact that they had survived at all gave them reason to celebrate.

“One of the things I admire most (about the Pilgrims) is that they clearly do purpose to celebrate God’s kindness in the midst of what we would consider, I think, to be untold tragedy,” Mckenzie, author of The First Thanksgiving: What the Real Story Tells Us about Loving God and Learning from History, said in an interview on Southern Baptist Theological Seminary President Albert Mohler’s podcast, Thinking in Public.

So why did the Pilgrims venture from England to North America, especially when they knew it could cost them so much? The answer to this question begins with their search for liberty.

“Interestingly, the Pilgrims that landed at Plymouth Rock came from a group of separatist Puritans that originally included both John Smyth and Thomas Helwys, some of the first English Baptists,” Miles Mullin, professor of Christian studies and religious history at Hannibal-LaGrange University told The Pathway (See article, “Journey to Freedom,” page 13).

“Like Smyth and Helwys,” Mullin added, “they believed in a gathered church comprised of adult believers, which put them at odds with the prevailing state church model in England. Legally prevented from living out their convictions regarding ecclesiology in England, they sought the freedom to do so, first in Holland, then in the Americas.”

According to Mckenzie, their relatively short jaunt across the English Channel to Holland carried enough difficulty of its own. Unable to get the government’s permission to leave England, they tried to sneak out. On one attempt, they were betrayed and thrown into prison.

On a second attempt, the men were able to enter the ship – “probably,” Mckenzie explained in his book, “so as not to leave the women and children alone with the crew.” But, spotting potential trouble from the authorities, the ship’s crew “weighed anchor and headed for the open sea, leaving wives and youngsters wailing on the beach,” Mckenzie added. Nevertheless, little by little, the women and children were able to reunite with their husbands in Holland.

These soon-to-be Pilgrims sought in Holland freedom from the “scorching sun” of persecution, Mckenzie wrote. Indeed, one of them shared about the “peace and liberty” they experienced in the city of Leiden, where they ultimately settled. But here, instead of persecution, they found the “strangling thorns” of economic depression and cultural degradation, which threatened to choke the congregation’s vitality.

“What strikes me about the Pilgrims is that they believe that the economic severity that they encounter in Leiden was causing their congregation gradually to just erode, and more and more individuals just became disheartened and had to go elsewhere for economic opportunity,” Mckenzie said in Mohler’s podcast. “And how many times in our own culture does someone who has an opportunity for a better job leave a congregation and go? These individuals said, ‘No, we will relocate as a congregation in order to allow us to continue to bond together, and we’ll find a place where that’s possible.’”

In short, they needed a land where they could live in freedom together and a place where their community could flourish. So, after debate and prayer, they set their faces toward the Americas.

Yet they knew the journey would come with risks.  Reflecting on their departure from Leiden, Pilgrim leader William Bradford later wrote, “So they left the goodly and pleasant city, which had been their resting-place near twelve years; but they knew they were pilgrims, and looked not much on those things, but lift up their eyes to the heavens, their dearest country, and quieted their spirits.”

With difficulty, the Pilgrims finally found a ship, The Mayflower, that set sail from Plymouth, England, in September 1620. During the next two months, they lived in cramped conditions inside the ship – more than 100 people in roughly the space of a school bus, according to Mckenzie. Late in the year, on Nov. 11, 1620, they finally arrived at Cape Cod, more than 200 miles North of their intended destination.

The voyage oversea had been difficult, yet the oncoming winter would be even more brutal.

“Many people understand that of the 102 passengers of the Mayflower, exactly half are going to pass away during that first winter,” Mckenzie told Mohler. “If we break that down, the death toll is not evenly distributed across the passengers. It hits women and it hits adults more than it hits males and children. So, of the eighteen wives who are passengers on the Mayflower, fourteen die before the spring. And by the time of that celebration in the fall of 1621, there are only four adult women.

“That’s one thing we rarely capture in the pictures of the first Thanksgiving. There were only four adult women, and just over half of the number are children. And so that Thanksgiving celebration is a gathering disproportionately of widowers and orphans; and that’s part of the story that I think we lose sight of.

“It gives a poignancy to the event that we can all too easily lose.”