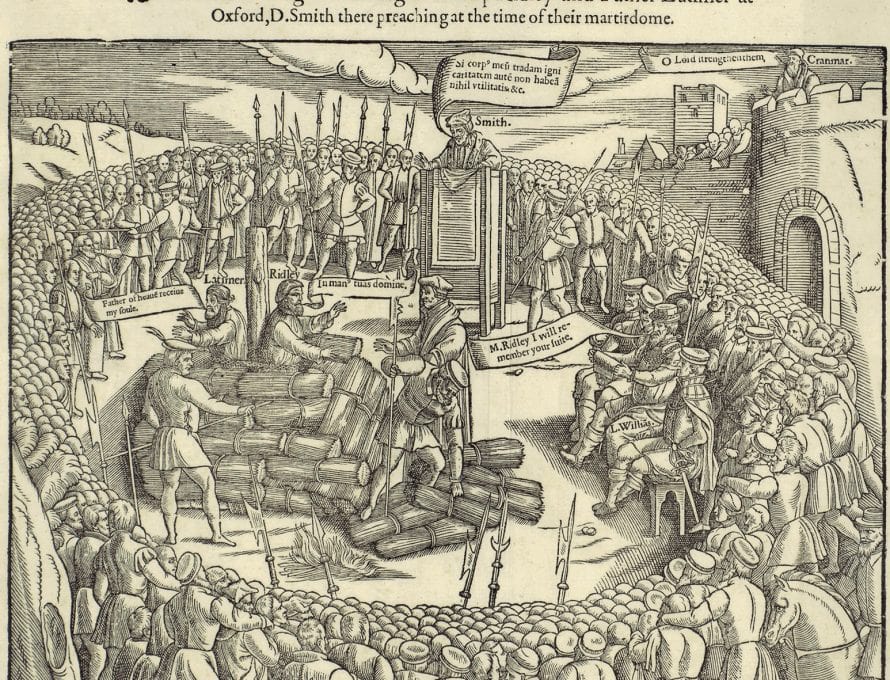 Protestant martyrs Hugh Latimer and Nicholas Ridley are burned at the stake on Oct. 16, 1555. Their deaths were recorded in John Foxe's "Acts and Monuments," better known as the "Book of Martyrs," from which this image comes.

OXFORD, England – Only moments before their execution in flames on Oct. 16, 1555, the Protestant preacher Hugh Latimer comforted his colleague, Nicholas Ridley. Both men had been prominent leaders of England’s Protestant church in previous years, but they had been arrested after the Catholic Queen Mary Tudor came to the throne of England in 1553. Now, they were chained together to a stake, standing amid burning faggots of wood.

As an executioner lit the faggots under Ridley’s feet, Latimer reportedly cried out, “Be of good comfort Master Ridley, and play the man: we shall this day light such a candle by God’s grace in England, as (I trust) shall never be put out.”

Latimer and Ridley were among some 280 martyrs to lose their lives because of their evangelical faith during Mary Tudor’s reign. And, as Latimer predicted, these these martyrs ignited the faith of many Protestants in centuries to follow, largely because their stories were recorded in a sixteenth-century bestseller, known popularly as John Foxe’s Book of Martyrs.

“It was men like Latimer and Ridley … who really did light the candle that never went out,” Michael McMullen, professor of church history at Midwestern Baptist Theological Seminary, said. “Today, still, the Gospel is alive and active in Britain – not as strong as it once was, and Britain itself is really in need of missionaries being sent to her. … But still the candle has not gone out.”

In October, McMullen and John Mark Yeats, also a Midwestern church history professor, highlighted the martyrdoms of Ridley and Latimer on their podcast, “This Week in Church History.”

According to Malcolm Yarnell, research professor of theology at Southwestern Baptist Theological Seminary in Fort Worth, Texas, the stories shared in Foxe’s Book of Martyrs inspired none other than the Pilgrims who, in 1620, suffered much while seeking a new life in a “New World.”

“The three books that the Separatists and the Pilgrim fathers had freely available to them were the Book of God (i.e., the Bible), the Book of Common Prayer, and the Book of Martyrs,” Yarnell told The Pathway. “It was through the struggle for the true faith against religious tyranny that the Separatists and Pilgrim fathers became convinced their travails were providentially ordained by God. Foxe taught them that, though the road may be sometimes tortuous, the Word of God will win. If one will stay faithful to God’s Word, God will make sure to accomplish his purpose in our lives. May we again be compelled by such faith in the perfect Word today, even as we recognize every history book, including Foxe’s, is human and thus imperfect.”