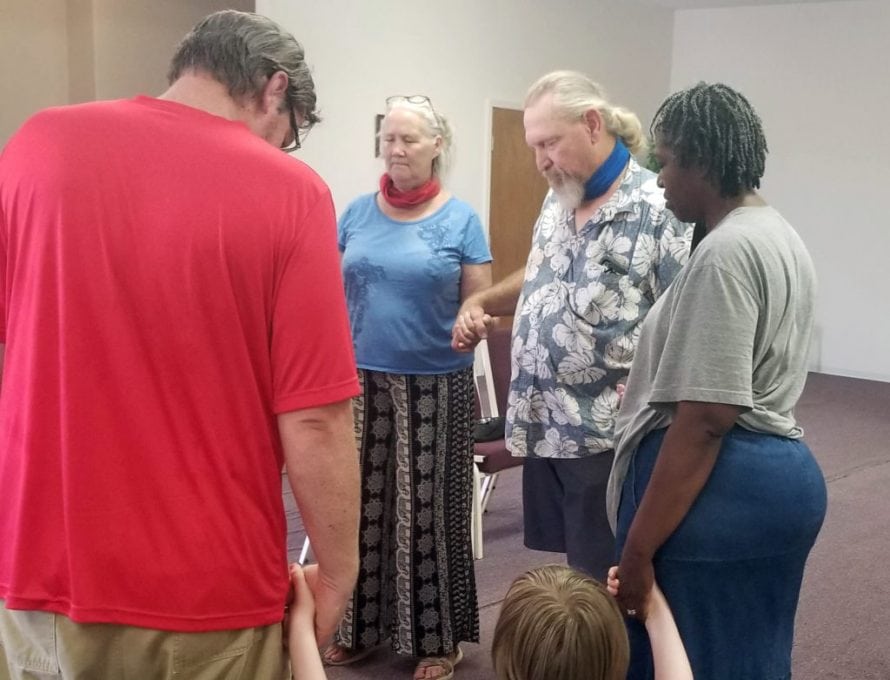 New Life Baptist Fellowship grew from six members to 17 during the COVID-19 pandemic. Pastor Dusty Marshall says, "[T]here’s so much to be grateful to God about what He has been doing."

ALAMOGORDO, N.M. (BP) – Dusty Marshall has only served as pastor of New Life Baptist Fellowship for about 11 months. But it has been a wild 11 months.

When he arrived last December, the church had six members and faced an uncertain future. Marshall got to work on developing a plan to relaunch the church. Like the rest of the country, his plans ran squarely into the COVID-19 pandemic in March.

God continued to work in ways Marshall never saw coming. Attendance has tripled. People have come to Christ, and the church has served its community in fresh ways.

But Marshall came to a point about three months ago when all he could see was what 2020 had taken away – months of meeting together, a planned revival and the opportunity to officially relaunch.

That’s when Marshall’s mother-in-law brought some clarity to the situation.

“My mother-in-law had to sit me down and remind me we’re not down,” Marshall said. “Our numbers had actually grown. We went from averaging seven people in attendance to 20. We went from six members to 17.”

As Thanksgiving nears, Marshall is one of a number of Southern Baptist pastors and ministry leaders looking back on a difficult 2020 with a sense of gratitude. Nearly 11 months after many churches headed into a new decade with a sense of optimism, many have faced unprecedented struggles this year. According to LifeWay Research, most Protestant churches say their attendance has not reached 70 percent of pre-COVID levels.

Yet these struggles have also led to innovations that have allowed Southern Baptists to reach new people. For Marshall, his gratefulness goes beyond the numbers to individuals God has used the church to reach.

“We’ve already had a baptism and someone come to faith,” Marshall said. “We have other friends of ours in Albuquerque who now travel down periodically as they can. [The couple] have been watching the online services. And she’s come back to faith. She walked away from Christ. Now she’s rededicated her life to Christ. My father-in-law dedicated his life to Christ. And so there are all of these little bitty stories. I kept trying to see something bigger happening. And when I focused on it, I realized that there’s so much to be grateful to God about what He has been doing.”

One of the key reasons for the church’s increased effectiveness during the pandemic has been participation in the U.S. Department of Agriculture’s Food to Families program through Send Network New Mexico, which has allowed the church to pass out nearly 1,000 boxes of free food to the community.

Technology has also played a part in some of the ways Southern Baptist ministry leaders engaged new people with the Good News this year. Seang Yiv, who serves as the chairman of the Cambodian Southern Baptist Fellowship, started a Bible study through Zoom that engages people in three countries and multiple U.S. states. Yiv, who lives in North Carolina, learned about a Cambodian man in Philadelphia who wanted to be discipled. A nephew in Texas soon joined the group. Before long, the Zoom group added men in France and Cambodia.

Yiv started the group in Genesis, he says, because the creation story has played an important role in reaching Cambodians for Christ.

“It’s a very dynamic group,” Yiv said. “We’re all excited to get together at 10 each Saturday morning for an hour and a half. I think I’ve already been able to have an impact.”

A couple of the group members have yet to come to faith in Christ, but Yiv is hopeful they will soon. Yiv’s wife Vijila is also leading an online group for women.

“We are very, very thankful for this time when during the pandemic, when we cannot visit one another, because usually we go to places across the United States to visit churches, but during this time, I really thank God, who has given us this vehicle for us to teach people,” Yiv said.

“Just for a frame of reference,” McGary said. “Our elementary school has about the same amount of kids. We’re in a pretty rural area, so having 200 kids is remarkable. That equates to 350 to 400 parents. Around 700 people came through our Trunk or Treat that night, which was absolutely mind-boggling.”Some churches discovered that changes to accommodate COVID-19 restrictions led to greater fruitfulness. Wes McGary, associate pastor of Westfield Baptist Church in Westfield, N.C., says the church normally sees about 50 kids visit for its annual trunk or treat. Taking COVID-19 restrictions into consideration, the church switched to a drive-thru trunk or treat in 2020, and close to 200 kids participated.

McGary also described several other blessings in disguise from the year, including upgrading the church’s online equipment and adding digital giving. He believes these two changes will help the church better engage people in the years to come.

“It’s super easy to focus on the negative,” McGary said. “So one of the things that I’ve been really harping on is that no matter if trunk or treat would have been a flop, if our video equipment would have remained the same, if we would have not instituted online giving, we are still blessed by God if for no other reason than we’re able to have a relationship with Him. And that’s reason enough to show gratitude and gratefulness to God.”