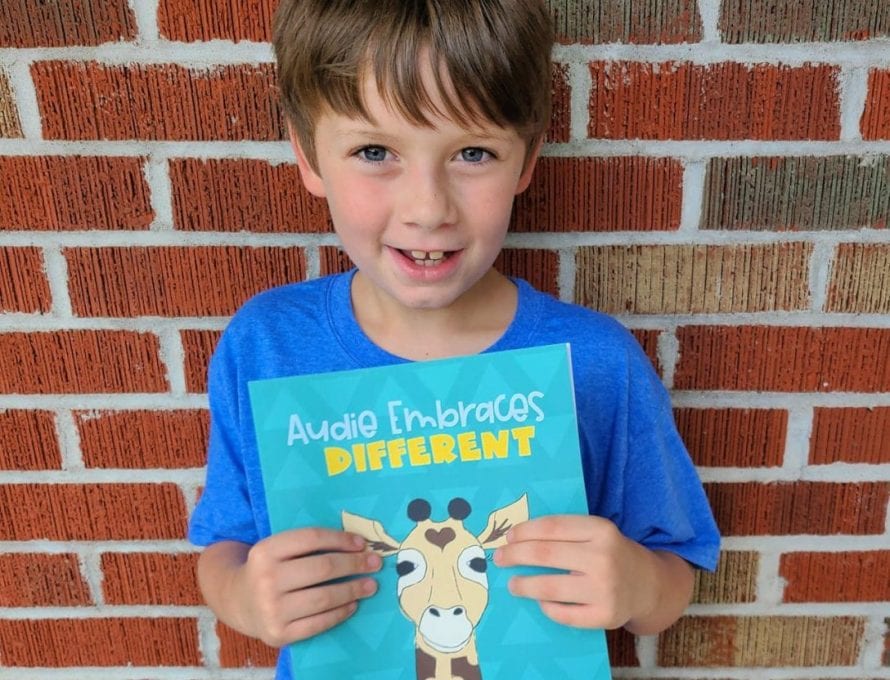 NEW BLOOMFIELD – Ezra Bertram displays a children’s book he co-authored with his mother, Christa. The book has given the family opportunities to share their faith with numerous people, including non-Christian doctors who work with Ezra, who was diagnosed with autism as a young boy. (Photo courtesy of Bertram family)

NEW BLOOMFIELD – While the rest of the world might look at Audie the Giraffe and see a cute stuffed animal tattered from years of snuggles, 8-year-old Ezra Bertram sees Audie as much more.

“Ezra was diagnosed with autism when he was four years old,” said his mother, Christa Bertram, member of Concord Baptist Church in Jefferson City and co-author of Audie Embraces Different, a children’s book about what it means to embrace autism as part of God’s design. “When Ezra was around kindergarten age he started to realize he was different from other kids, and he felt lonely and scared. Audie was there for him through it all.”

Audie the Giraffe was such a constant in Ezra’s life that one day his aunt drew a cartoon depiction of him. The Bertrams liked the drawing so much that they included it in a t-shirt design for an autism awareness 5K race they were participating in, along with the phrase, “Embrace Different,” a phrase Christa and her husband, Josh, have spoken into Ezra’s life since he was first diagnosed. From those t-shirts the idea to turn Ezra’s fuzzy friend into a storybook star began to take shape. But, between the Bertrams’ two at-home businesses and homeschooling their three boys (Nehemiah, Ezra, and Eliot) there just wasn’t enough time in the day to work on their big idea.

But God kept putting the Audie character in the forefront of their minds so that when Missouri was asked to quarantine in March 2020 due to the COVID-19 pandemic, the Bertrams saw the slowdown as a golden opportunity to finally finish writing Audie’s story.

“While there are a lot of books and devotionals for parents of kids with autism, we found that there were no children’s books for kids diagnosed with autism from a Christian perspective,” Bertram said. “Part of our passion in writing and publishing Audie Embraces Different is to share our perspective of autism from a Biblical point of view.”

The book, published in August and available on Amazon.com, highlights Psalm 139:14, which says: “I will praise You, for I am fearfully and wonderfully made; Marvelous are Your works, And that my soul knows very well” (NKJV).

“It addresses the fact that some things are harder for kids with autism than for other people, but shows it in a way that children can understand,” Christa said.

While Christa said the entire family provided opinions and feedback about the book as it was being created, it was Ezra’s personal experiences and raw feelings that brought Audie the Giraffe to life.

“There is a part in the story where Audie encounters a situation that made him feel like he was being shaken from the inside out,” Christa said. “That was all Ezra and how he described the feelings he’s actually felt in difficult moments.”

While the family prays that this book will help and encourage hundreds and even thousands of children diagnosed with autism and their families going forward, God has already blessed their effort with opportunities and conversations as a result of publishing this book.

“While there are some Christian doctors and medical professionals that we see, many of them are not,” Christa said. “We gave out the books to everyone, and it’s nice to be able to open it up to where they understand our faith in God and where we’re coming from. We’ve been able to have dialogue and build relationships and give testimony about the hope that we have. This book is rooted in Scripture, and we have been able to give it to people who need spiritual truth. It’s pretty exciting.”