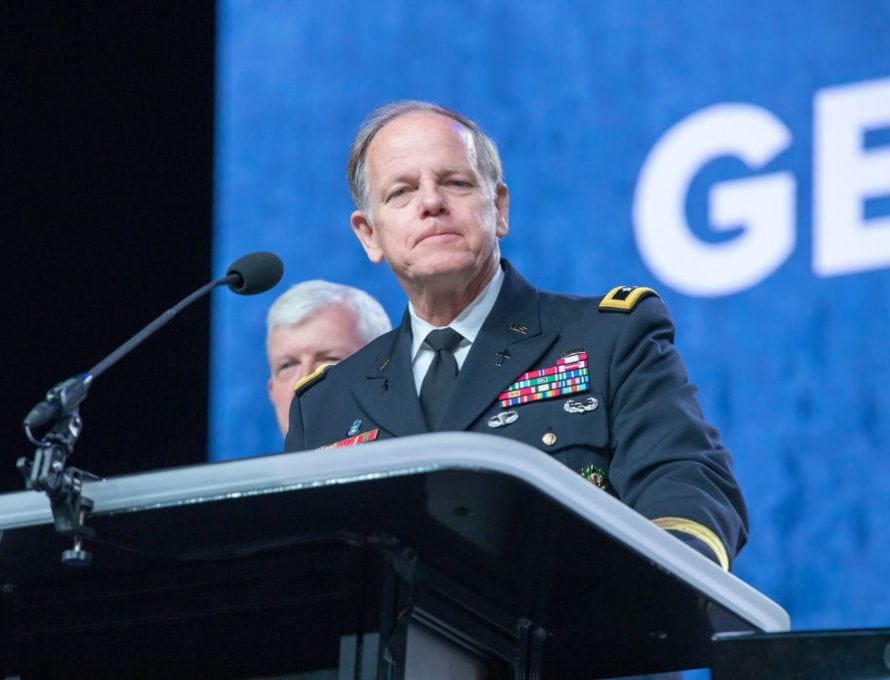 Doug Carver, executive director of chaplaincy at the North American Mission Board and Chaplain (Major General) in the U.S. Army, Retired, addresses the Southern Baptist Convention during the 2019 Annual Meeting in Birmingham, Ala. NAMB photo.

EDITOR’S NOTE: Chaplain (Major General), U.S. Army, Retired, Douglas Carver is executive director of chaplaincy at the North American Mission Board. Carver served as the 22nd Chief of Chaplains of the U.S. Army before retiring from the military and joining NAMB.

ALPHARETTA, Ga. (BP) – There is no mystery behind the endurance and the success of American liberty. It is because in every generation, from the Revolutionary period to this very hour, brave Americans have stepped forward and served honorably in the Armed Forces of the United States. Every one of them deserves thanks, admiration and prayers from our entire country.

Our debt to our military veterans can never be repaid, but our gratitude and respect must last forever.

First of all, let us remember the noble cause for which they served. In the Gospel of John 15:13, Jesus Christ told His disciples that He was on a sacred and noble mission. His goal, priority and purpose was to restore humanity’s relationship to God that had been destroyed by sin. Christ’s noble cause was to secure our liberty and freedom from bondage to our sinful nature.

Today, let us remember our veterans, primarily young men and women who have set aside their hopeful dreams and personal ambitions to answer the nation’s call to duty. They left the comforts of home to deploy to some foreign land, willing to sacrifice life and limb, health and wellbeing, volunteering to stand in harm’s way and defend our freedom. Our veterans who deploy into combat quickly lose their innocence and a bit of their humanity as they witness the chaos, terror and carnage of war so that we can continue to enjoy life, liberty and the pursuit of happiness.

Veterans also live with the constant reminder that their military service comes at a great cost. At a time in which we have growing concerns about national unity and international unrest, our lives today remain secure and free. Our many national liberties have been underwritten by the selfless and sacrificial service of our veterans. They’ve paid for our freedoms in full with their blood, sweat and tears. Many of them have given their full measure of duty by laying down their lives for the precious liberties that we hold dear. It is truly humbling to think of the eternal debt we owe those who’ve worn the nation’s cloth. We must never forget the personal, heartfelt commitment of our veterans.

Finally, let us remember the personal commitment it takes for every veteran to wear the uniform of the Armed Services. Jesus Christ taught His disciples about the importance of personal commitment. He said that there’s no greater love than laying down your life for your friends. Shortly after He said these words, He showed His disciples and the world that He was even willing to die on the cross at Calvary for the sins of the world.

Sergeant First Class Paul R. Smith, 33, was a platoon sergeant with Bravo Company, 11th Engineer Battalion, 1st Brigade Combat Team, 3rd Infantry Division, during the invasion of Iraq in March 2003. On April 4, 2003, Smith was setting up a temporary enemy prisoner of war holding area during the seizure of Saddam International Airport when his unit came under attack. Sergeant Smith kept his soldiers focused during the fight while engaging an overwhelming enemy force with only his personal weapon, giving his soldiers time to regroup and mount an attack of their own.

When the shooting stopped, the enemy force had been totally defeated, but not before Staff Sergeant Smith had suffered a mortal wound. As a result of his heroic actions, the Congressional Medal of Honor was posthumously awarded to Sergeant First Class Smith, the first recipient of the Medal of Honor during the Global War on Terrorism. In his last letter home to his wife, Smith said, “I’m prepared to give everything to make sure all my boys make it back home safely.”

There’s no greater love than this.

On this Veterans Day we salute our veterans for the noble cause, the great cost and the personal commitment they have given to keep our nation the home of the free and brave. How can we express our gratitude to our veterans and their families? We can give of ourselves in service to others in our communities, the nation and the world.

Our personal service is needed in our schools, our local government and civic organizations and our houses of worship. We can all make a difference by simply showing dignity, respect and love to others. We must make a conscious decision to practice the art of civility at a time when there is a shortage of it. There is no better way to preserve and pass on our cherished national values, perhaps best summarized by one key phrase in the Pledge of Allegiance: “one nation, under God.”

God bless our veterans and their families. And God bless America!