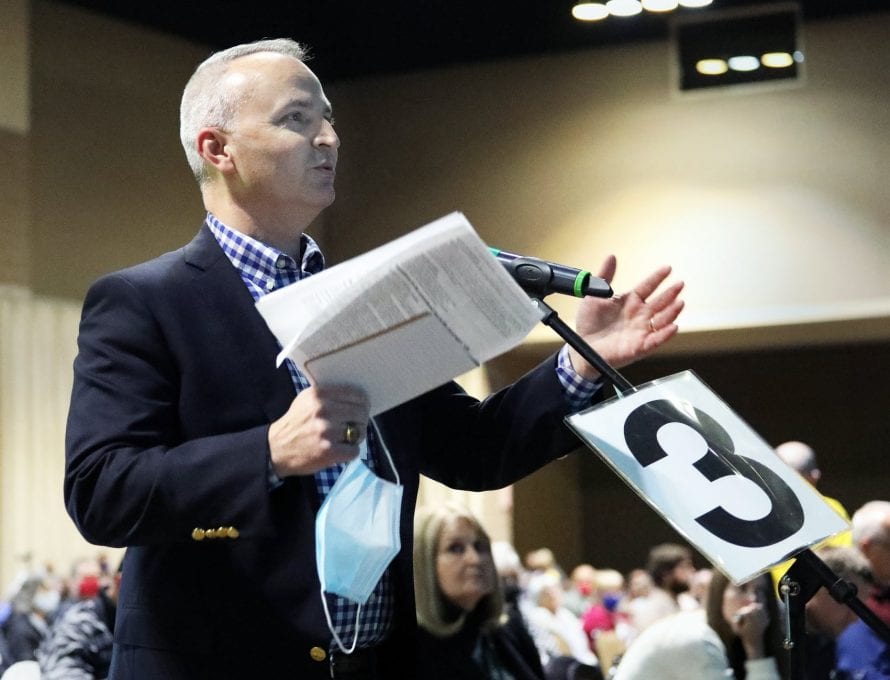 ST. CHARLES – Debate ebbed back and forth to ensure wording was just right, but messengers voted to approve four resolutions during the Missouri Baptist Convention’s annual meeting, Oct. 26 and 27 here.

Resolution 1 was a standard courtesy resolution expressing thanks to the local arrangements committee and the convention center staff, but Resolutions 2, 3 and 4 were more weighty.

Resolution 2 dealt with the restoration of resident rights. Authored by the MBC Christian Life Commission, this resolution denounced Centers for Disease Control and Department of Health and Senior Services regulations that kept clergy from ministering to nursing home residents. It affirmed those residents’ First Amendment rights.

“What that means is significant,” Rodney Harrison, president of The Baptist Home, told The Pathway at the time. “Not only does it give provision for families to have greater access to their loved ones, but it also includes pastors among the essential individuals and personnel that can come and visit residents in the nursing home.”

The updated guidelines read, “Also, in addition to family members, compassionate care visits can be conducted by any individual that can meet the resident’s needs, such as clergy or lay persons offering religious and spiritual support.”

Prior to this update from the CMS, Harrison expressed his deep concern that COVID-19 restrictions had robbed First Amendment rights from long-term care residents, forcing them to face isolation and loneliness amid the pandemic, without any pastoral care.

Resolution 3 dealt with abolishing abortion. The MBC has a very long and consistent history of pro-life resolutions. This resolution was not reported out by the MBC Resolutions Committee, but after an appeal by the resolution’s author, Timothy Faber of Aurora Springs Baptist Church, Eldon, messengers voted to allow the resolution to be heard and debated. The subsequent debate centered around the resolution’s call for the total ending of abortion and phrases like, “we will not embrace an incremental approach to ending abortion…” and “without exception or compromise.” (The Resolutions Committee noted Missouri Baptists’ history of supporting an exception to save the life of a mother.)

Faber spoke on behalf of his resolution, saying, Missouri Baptists should “continue to take the lead in this effort to preserve life.”

“With all of the incrementalism we’ve had, we’ve yet to fully accomplish our goal,” he said.

The Committee on Resolutions voiced its agreement that abortion must be “abolished,” but moved to amend the resolution, striking four paragraphs of the 19-paragaph resolution. Those paragraphs dealt with incrementalism; calling for, in the words of the committee, women who have abortions to be charged with murder; and not accepting any exceptions.

Messengers accepted those amendments, and ultimately passed the resolution. Later, Doug Richey, messenger from Pisgah Baptist Church, sought to re-visit the already-passed resolution. He argued that the wording as passed still looked down on any effort to restrict or limit abortion that fell short of total abolition. For example, he said, the Missouri General Assembly’s passage of a “Heartbeat Bill” in 2019 – which bans abortion in the state once an unborn baby’s heartbeat is detectable – would be unacceptable under the wording. Richey, who serves as a state representative for parts of Clay County, himself voted for that bill, which was widely praised by pro-life advocates. President Jeremy Muniz ruled that out of order, but a challenge came from Vic Borden, Red Bridge Baptist Church, Kansas City. The messengers voted to reconsider, and the Resolutions Committee met with Richey and Faber to further clarify the language. Messengers then voted to approve the second amendment, though the committee noted Faber had some further concerns about the resolution.

On Use of Products
of Fetal Tissue Research

Resolution 4 dealt with the use of products that come from fetal tissue research. This resolution was not reported out by the MBC Resolutions Committee, but after an appeal by the resolution’s author, Michael Wilbanks of Faith Baptist, Festus, messengers voted to allow the resolution to be heard and debated.

The subsequent debate centered around the resolution’s call for the rejection of certain products derived from fetal tissue research, including vaccines. The Resolutions Committee supported all but the final paragraph, saying it did not allow for previously existing (as opposed to currently produced) lines of cells to be used and explaining that certain vaccines required for international missionaries’ travel have used these cell lines.

Debate about missionaries and vaccine alternatives followed with one unnamed messenger noting the disagreements all seems to be about the “wording of the resolution, not the heart.” The resolution passed by a paper ballot: 242 votes for, 175 against.