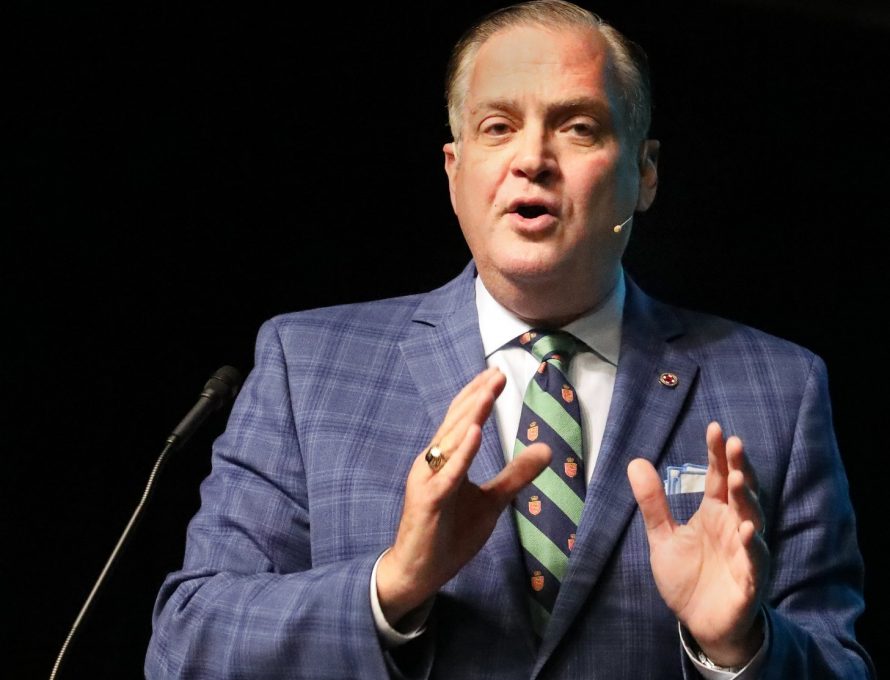 Speaking from Romans 3:21-26 and drawing heavily from Reformation theology, Mohler emphasized the core truths of the gospel message. Because salvation is a work of God alone, humans are incapable of bringing about their own salvation. “If you are part of the picture (of salvation), then it’s not the gospel alone.” While considering verse 22, Mohler went on to say, “Here’s something that should shock us. Notice that Paul’s logic doesn’t even begin with the love of God. Even prior to the demonstration of God’s love is his love for his own righteousness.”

However, Mohler warned that sinful humanity will never understand their need for salvation on their own. Because unbelievers think of themselves as essentially good, they fail to recognize their standing before a just God.

“Most people think, ‘My problem is something outside of me, and whatever is going to rescue me comes from inside me,’” he said. He went on to clarify, “The biblical worldview (says) the problem is inside of you and the only rescue is entirely outside of you.”

Using witty personal anecdotes, Mohler pointed to the sufficiency of the gospel in addressing a sinful culture. Though the modern culture has unique peculiarities, its fundamental problem is sinful rebellion against a just God. Therefore, cultural engagement with the Gospel looks the same as during biblical times. “The bottom line is, it’s the same just made obscenely up to date.”

In the interview, Mohler also warned that increased secularization in the culture is ultimately unhelpful for evangelistic efforts. Rather than offering new opportunities for gospel conversations, Mohler said, “The culture has inherited a secular conscience rather than a Christian conscience, [which has led to] a loss of common grace and an inherent defense against the gospel.” Regaining a “Christianity-informed conscience” will lead not only to general blessing, but also to more evangelistic receptiveness in the broader culture.

To Mohler the answer to evangelism is declaring the full gospel to a hostile world. When Christians unashamedly preach an unchanged gospel to a culture that specializes in new forms of depravity, God’s Word will not return void.

Mohler’s closing words encapsulates his entire message of the gospel alone informing and driving Christians to faithfully speak of the good news of Jesus Christ. “The mystery of the gospel is how God demonstrates simultaneously that he is just, and because of the cross and the empty tomb, He is never more just than when He is the justifier of the one who has faith in Jesus. If that doesn’t excite you about the gospel, then what would?”