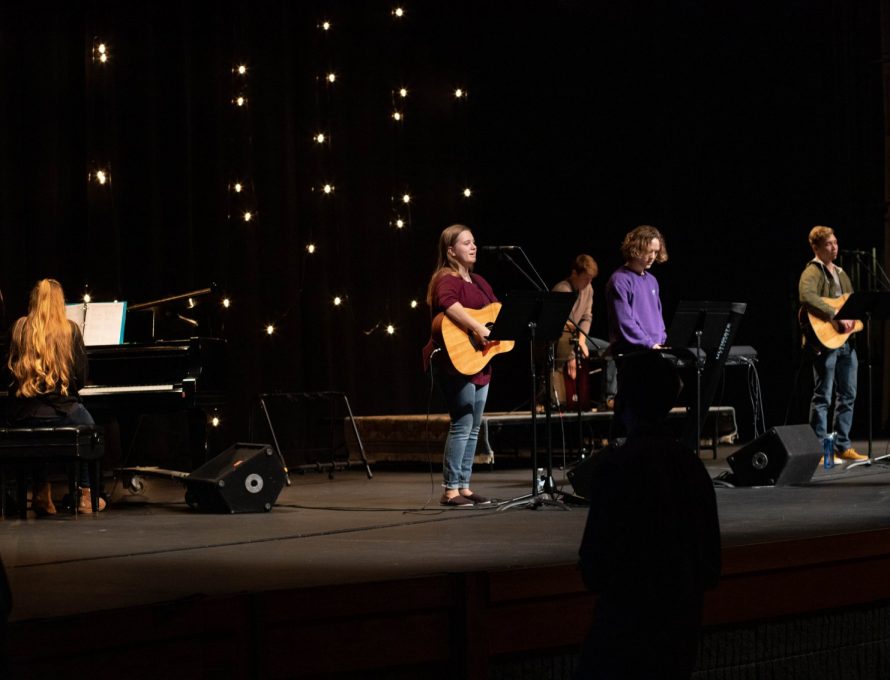 “I’m just in awe of how God responded,” said Tyler Eads, a junior accounting and Christian studies major from Neosho, who organized the event. “Many students put away sin in their life, learned and practiced spiritual disciplines, and are considering a future with cross-cultural ministry.”

Each evening, a two-hour gathering was held for a time of praise and worship, discussion and prayer. Saturday consisted of seven breakout sessions including daily Bible reading and study, prayer, faithfulness, local missions and a Zoom session with a former missionary.

While the in-person gatherings consisted of more than 100 attendees, there were still several others who participated with family or in their dorm rooms via livestream.

“The breakout sessions went very well,” Eads said. “We consistently had 20-30 students in attendance, and the sessions were all very rich in material. Faculty and staff members came prepared and had so much insight to offer students.”

Dr. Allison Langford, vice president for strategic planning and initiatives, was one of the faculty/staff members to lead a breakout session on Saturday. She said the 25-30 students in her session, “Faithfulness in the Now,” were engaged and eager to ask questions and respond.

“We discussed how we can be loyal in this moment, no matter the circumstances,” Langford said. “We discussed four (overlapping) concepts: being engaged/focused in the moment; being connected to the Spirit and to the Word to know how to act; using the resources you have in the now (including actions such as thankfulness); and being willing to endure the ‘now,’ knowing that there is an eternal glory waiting for believers.”

For each point, the group discussed one or more biblical examples, and Langford read excerpts from “The Hiding Place” by Corrie ten Boom – a book very influential in Langford’s life.

On Sunday night, students had an opportunity to share any commitments they wanted to make after the weekend. After each main gathering, there would be about 20 students who wanted to meet to keep reflecting on the messages, join in worship and pray.

“In many ways, it was an ideal learning environment, and I was so energized by the end of it,” Langford said of the weekend. “It also required a ton of work on the part of our students. It was truly a student-led event, and their planning and preparation was evident. I was especially impressed with those who delivered the sermons during the large sessions.

“For me, this was one of the most significant events I have been a part of during my 17-plus years at SBU. I love our students, and I love that they are leading the way to revival. I want to be a part of what they are doing – and more importantly, what the Lord is doing.”

Dr. Matt Kimbrough, division head of The Courts Redford Division of Christian Ministry, also was encouraged by the fruits of the student-led revival.

“Seeing the devotion of those who led out was a tremendous blessing,” Kimbrough said. “The students put so much work into planning and praying before ‘The Awakening.’ At the event, many of those same people opened up their own lives to share their very real struggles and success in their walks with Christ.

“I loved seeing the genuine passion for Christ in these students, as expressed through some incredibly powerful testimonies and preaching.”

As for a revival event like “The Awakening” occurring again in the future, Kimbrough said the University is open to the direction God leads.

“We don’t want to have an event for the sake of tradition, but I’m prayerful that God will prompt student hearts again in the future to seek revival among their peers,” Kimbrough said.