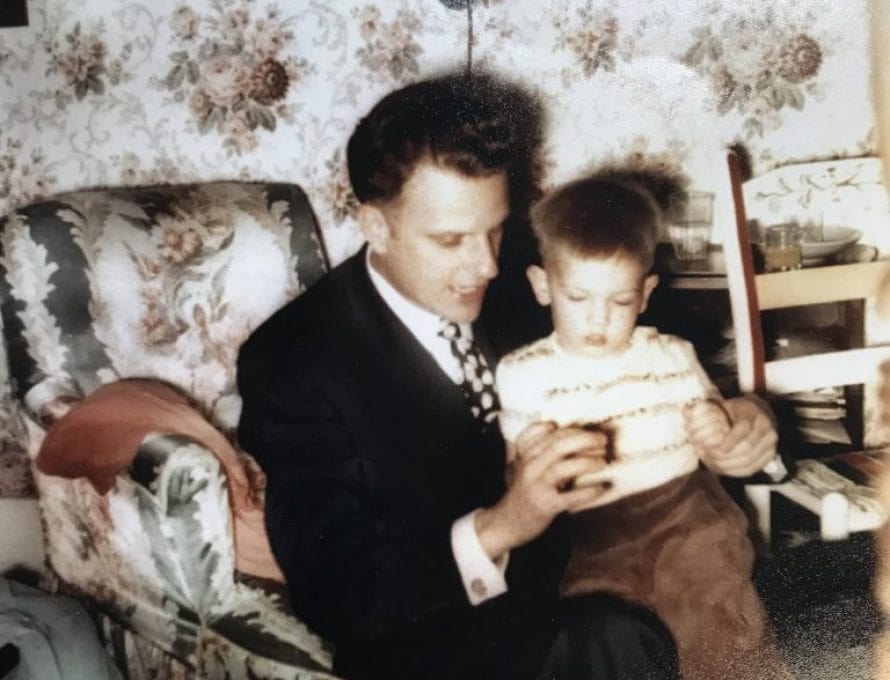 TAYLORSVILLE, Ky. – This 1953 photograph of Billy Graham holding a boy on his lap was found last month in a filing cabinet at First Baptist Church Taylorsville, Ky.

Pastor Chance McConnell had heard about the photograph from 1953 of the late Rev. Billy Graham holding a child on his lap in the church parsonage, but he’d never seen it.

Until Monday, Oct. 26. And thanks to social media, a lot of other people have seen it now too.

The color photograph shows Graham holding Bill Crouch, the son of Henry Crouch, who was pastor of First Baptist Church in Taylorsville, Ky. That little boy grew up to become the president of Kentucky’s Georgetown College, retiring in 2013.

They were doing some sprucing up around the office and found the photograph in a filing cabinet with some office supplies like staples and paper clips, McConnell said.

“I know it sounds kind of weird but I was excited,” he said. “Somebody like Billy Graham is such a giant in the faith. It’s cool to think he was here. It was cool to me anyway. I put it on my Facebook page, and it started picking up some traction. It was getting likes from some of my high school classmates and even a comment from Dr. (Adam) Greenway, the president of Southwestern Baptist Seminary. It’s funny the range of people who were liking it, from my high school friends to the president of a seminary. It speaks to the testament of Billy Graham.”

The most well-known evangelist in the world, Graham died in 2018 at the age of 99. That would make him 34 in the photo. McConnell said that Henry Crouch was from North Carolina, as was Graham, so the two may have known each other that way. He believes the photograph may have been taken while Graham was holding one of his two crusades in Louisville.

McConnell, who has been at Taylorsville FBC for two years, said he is a bit of a history buff. The church will celebrate its 195th anniversary in a couple of years, and McConnell promised to do something special with the photo during that time.

He has a photo in his office of a 1947 youth and children’s choir of about 20. One of the little girls in the photo is now a church member in her 80s. “In a non-COVID world, she’d be in our auditorium singing some of the same songs she sang then,” he said.

As for the Graham photo, he said it would be stored in a safe place.

“It didn’t just make my day, it made my week,” he said of the find.