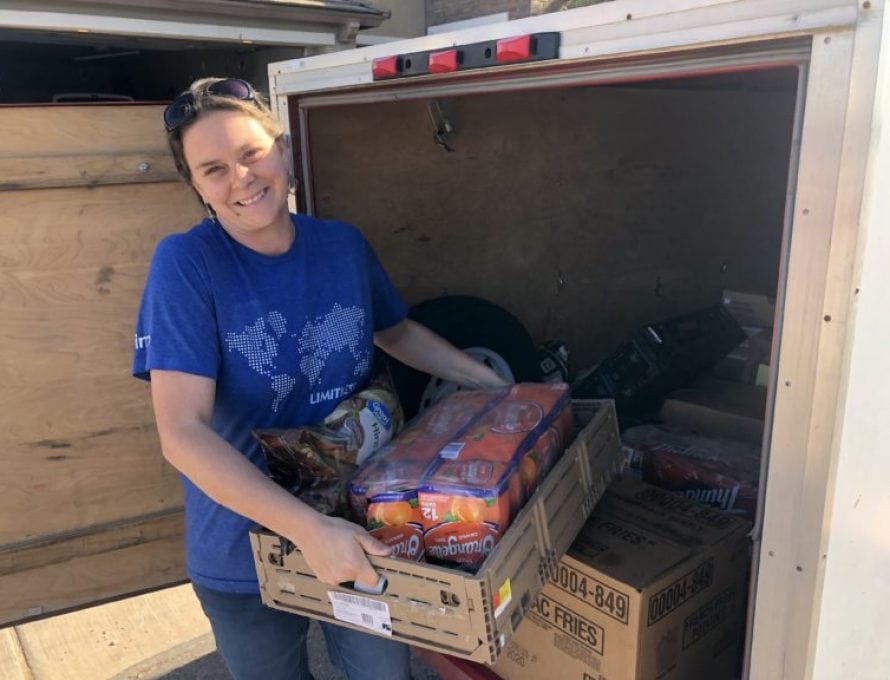 Brittany Gibbs and her husband Greg serve as North American Mission Board missionaries on the Tohono O’Odham Reservation in southern Arizona. Photo provided by Eric Gibbs.

ARIZONA – Eric and Brittany Gibbs have built their ministry to Arizona’s Native American community on the theme “You are loved,” and their “Live Love Ministries” seeks to make as many partner individuals and churches a part of that as possible.

“Hospitality is key for followers of Jesus,” Eric Gibbs said. “Hospitality is bringing people into your life, not just welcoming them into your home. As a believer it is important to love people, all people, and especially those who are struggling, who are vulnerable.” 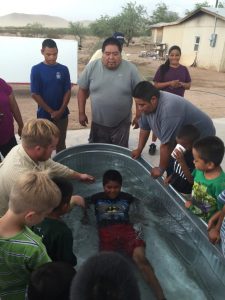 ARIZONA – Eric Gibbs, left, baptizes a boy on the Tohono O’Odham Reservation in southern Arizona. Gibbs and his wife, Brittany, have served members of the community there since 2014 as missionaries with the North American Mission Board. Photo provided by Eric Gibbs.

North American Mission Board (NAMB) missionaries Eric and Brittany have been in southern Arizona since 2011, first working with students before Eric began pastoring First Pima Baptist Church in Sacaton, where he served until 2019.

Gibbs planted Cockleburr Ethne’ Church in 2014 (while still pastoring First Pima) in a northern community on the Tohono O’Odham Reservation. His family—including two biological, four adopted, and (currently) three fostered children—reaches out to several communities on the reservation which, by land mass, is the nation’s second largest. They also minister at the nearby Gila River Reservation as well.

“You may be the pastor of a church in a community and have thirty on Sunday,” Gibbs said. “You end up being a pastor to people who may never come to a church service, but they know you because you love on them. When they have an issue or are struggling, you’re the one they call.”

Gibbs also ministers in villages that don’t yet have a church, some a hundred miles from others. He starts Bible studies “in places God has given us a connection” and has events often aimed at drawing in youngsters who, then, draw in their parents.

Most years, with the help of mission teams from several states, the Gibbses coordinate at least six Vacation Bible Schools, plus sports camps—softball, basketball, football—Bible studies, and a variety of construction or support ministries to help reservation villages and Southern Baptist churches in those villages. They also provide back-to-school backpacks stuffed with supplies as well as elaborate Christmas parties for up to one thousand children in seven villages.

“If the church is in the community, the body of Christ should be making a difference in that community,” Gibbs said.

The COVID-19 pandemic this summer resulted in the cancellation of mission teams that would have helped with several week-long VBS programs. Instead, the Gibbs family and local volunteers led two-hour, weekly VBS-type sessions for children and adults in six communities for five weeks.

But when Arizona became a hotspot for the pandemic, the reservation was closed to outsiders, and the Gibbses developed a new plan.

“We are still allowed to go on the reservation to give necessary supplies, such as food, hygiene supplies, masks, etc.,” Gibbs wrote in his late summer newsletter. “We are using this opportunity to make and distribute packets each week for the children to do at home, hopefully with their family.

“The packets contain the lessons and activities we were originally going to do in our group gatherings,” Gibbs continued. “We are also distributing binders to the youth and adults and walking them through the book of Ephesians. While this isn’t what we had ‘planned,’ we are trusting God, knowing His plans are greater, and praying that these lessons and activities will be used for His glory.”

In addition to providing food, hygiene, and health supplies to people on the Tohono O’Odham, Gila River, and White Mountain Apache reservations for several weeks in the wake of the COVID-19 pandemic, Gibbs arranged an April 6 tribal prayer gathering that drew leaders from at least eight tribal nations to express their concerns.

“From the beginning we tried to involve ourselves in the community, to add value wherever we were,” Gibbs said. “We tried to take a position of learner, to learn about the people, places, and culture, before we would share anything with them. We weren’t just coming for a day or a week but to share our lives with them, to point them to Jesus.”

The Gibbs’ children helped open doors from the start, Gibbs said. Today the two oldest—age fifteen and fourteen—help lead. The others join in with village children. “Our kids are dragged all over the mission field,” Gibbs said with a laugh. “Santos is one who always shows love. He plays with and includes any child, and he’s willing to help in any way.”

During the nine years they’ve been in southern Arizona, the Gibbs family has included twenty-eight foster children. Brittany spoke of an initial reluctance to foster, knowing the pain that would come from giving up children they loved.

“God convicted us of that,” Brittany said. “We’re adults. We can handle it. If we can give them a sense of stability and love, then it’s worth it. I have nine kids in my house but have twenty-five outside my house I still love and pray for. Anything hard usually is worth it.”

Their family’s strategy is to “pour your life into people, to equip them,” Gibbs said. “They have the Holy Spirit in them. Real, lasting change will take place when they continue to reach people from their culture with the Gospel and disciple them.

“On the reservation, everybody is connected to each other,” he continued. “When you build relationships in one community, it connects you to many communities. The most effective way of leading people to Jesus? We haven’t left. They’ve seen people come and leave. To come, plant our lives, stay, share our message, and show it year after year has helped us tremendously.”