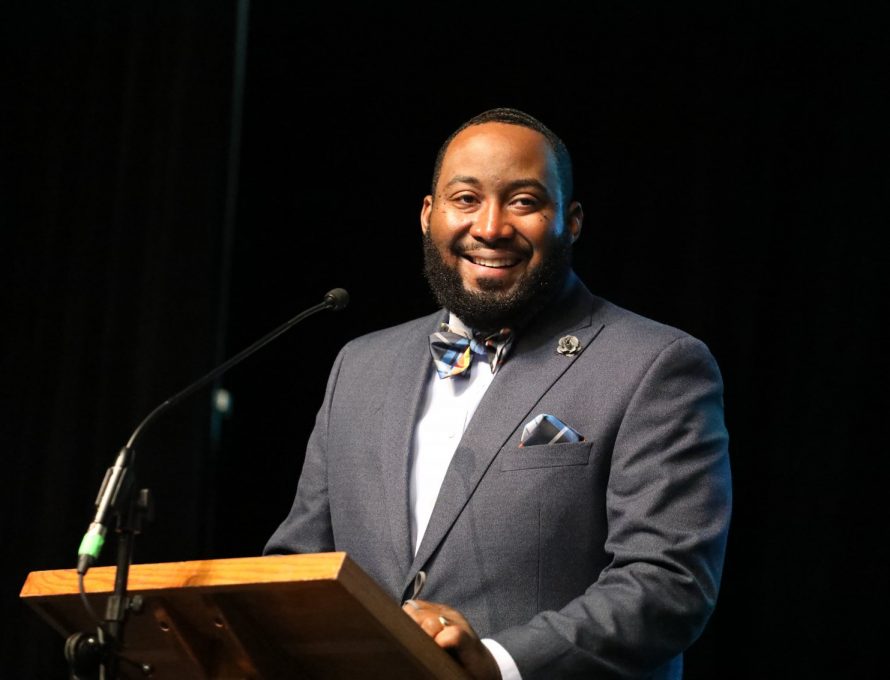 ST. CHARLES, Mo. – Jon Nelson, pastor of SOMA Community Church, Jefferson City, expresses his gratitude to Missouri Baptist Convention (MBC) messengers for electing him as their new president. Nelson, who will preside over the convention in 2021, is the MBC's first ever black president. (Pathway photo by Bob Greenlee)

Amid a standing ovation from messengers, Jon Nelson was elected as the MBC’s first black president. He is an MBC church planter and pastor of SOMA Community Church, located near the campus of the historically black Lincoln University in Jefferson City. Immediately following the election, Nelson tearfully expressed gratitude to MBC messengers for the opportunity to serve them. 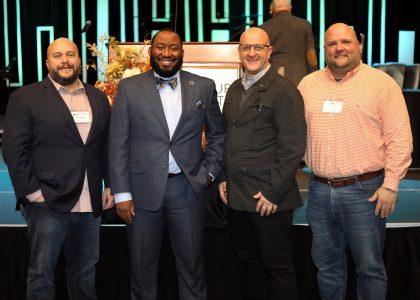 For the past two years, Nelson has served as the MBC’s first vice president. He also serves as chairman for a racial reconciliation task force that was appointed at the MBC Executive Board meeting in March. He will preside over next year’s annual meeting, which will convene, Oct. 25-26, 2021, at the Branson Convention Center in Branson, Mo.

During his address, 2020 MBC President Jeremy Muniz urged Missouri Baptists to center their lives and ministries around the annual meeting’s theme, “Jesus Saves.”

Preaching from Luke 19:1-10, Muniz reminded messengers of the worth of a human soul. “Every soul will live with God or apart from God forever,” he said. And, although it’s difficult to win souls, Missouri Baptists must be “intentional,” “open” and “faithful” in sharing the message that “Jesus saves.”

“Once we have found rest for our souls in Jesus,” he said, “we must become restless to see souls saved in the name of Jesus.”

“The beauty of Southern Baptists’ cooperative work is that no matter the size, every church is valuable,” said Yeats. “Every association has worth. Every state convention is needed. Every SBC entity has an immeasurable role to play in the Kingdom of God. We must count everything as loss for the sake of the cross. It’s how we do our work, now and until we hear the trumpet call pronouncing the Day of the Lord.”

Other keynote speakers at the annual meeting included:

During their business session, messengers approved the MBC’s 2021 spending plan, which is based on a $15 million CP budget. This budget sets aside 5 percent of the total CP giving for “shared expenses,” which are allocated for annuity protections and The Pathway.

As recommended by the MBC executive board, Missouri Baptists also approved a new, seven-year missions partnership with the churches of the Montana Southern Baptist Convention, beginning on Jan. 1, 2021, and ending on Dec. 31, 2028. The partnership may be extended after this seven-year period, if both convention’s desire to do so.

The new missions partnership was one of 22 recommendations from the MBC executive board that messengers approved, which can be viewed in the 2020 Book of Reports on the MBC website at http://media.mobaptist.org/public/annual-meeting/2020/2020-bor.pdf.

Additionally, messengers collected a special offering, which will be given to Oasis International for the benefit of the Good Neighbor Initiative, a ministry to refugees that Missouri Baptist churches in St. Louis have been heavily involved with in recent years.

Missouri Baptists also approved four resolutions, which called for the abolition of abortion; rejected the “use of any and all products” derived from the fetal tissue of aborted babies; and, in the context of the COVID-19 pandemic, called upon elected officials to restore and protect the religious liberty rights of residents at nursing homes and other long-term care facilities.

Messengers also submitted four motions. Two motions were ruled out of order, including one motion requesting that all pastors and DOMs sign the Baptist Faith & Message 2000 and another calling Missouri Baptists to reject Critical Race Theory and similar worldviews. Two other motions were referred to the MBC executive board. Of the two motions, the first was in fact a set of five motions aiming to amend MBC bylaws and seeking the convention’s will regarding MBC nominating committee rules and procedures. The other motion referred to the executive board requested that MBC resolutions be published at least one week prior to the annual meeting.