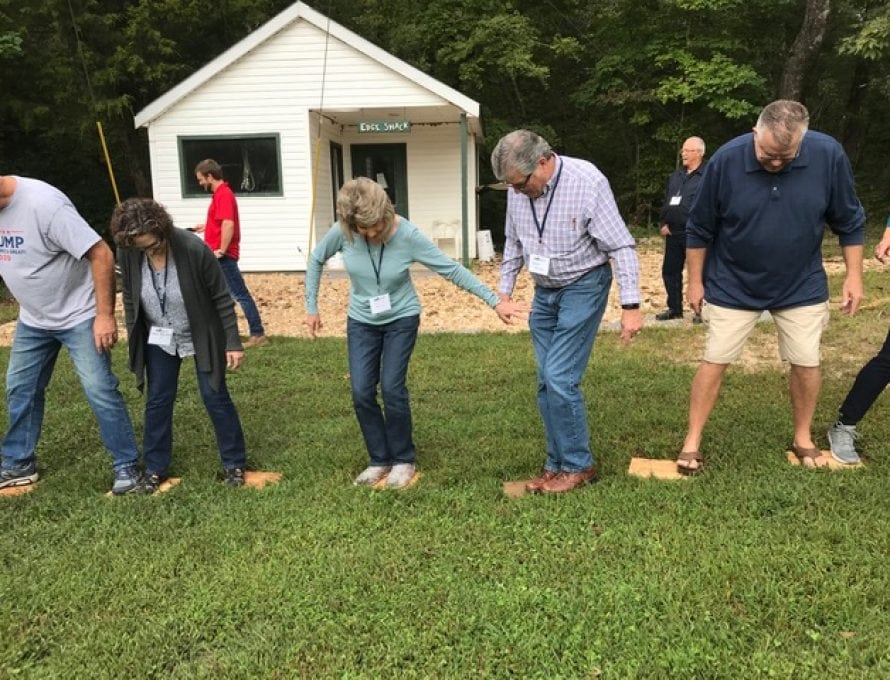 ROACH – Directors of missions and their wives played a game called “Chocolate River” at Windermere during their annual retreat. The game simulated a river of melted chocolate with “wafers” to be stepped on to cross the river. Here MBC staff member Spencer Hutson and his wife Valerie (center) are helping the group bridge the “river of chocolate” at the “Edge” ropes course at the Windermere facility. (Pathway photo by Richard Nations)

ROACH – The Windermere conference center was the setting for the semi-annual retreat of Missouri directors of missions (DOM).  The Sept. 22-23 meeting saw about 50 DOMs attend.  Many remarked it was the first time they had been at the center in over 20 years.

Many expressed joy at being able to be in the facilities again since the center has been returned to ownership and governance by Straightway Holdings, Inc. – a subsidiary corporation of the Missouri Baptist Foundation (MBF). That transfer of ownership was made last January when the conference center was sold to the MBF subsidiary corporation for $4.75 million in a bankruptcy sale on the steps of the Camden County courthouse. For almost two decades the center was embroiled in legal battles with the MBC over governance and ownership and the courts ruled it could separate from the MBC.  However, with the sale of the property and new governance a new and closer relationship with the convention has been established.

While at the retreat, the DOMs heard reports from Tim Huddleston, the president/CEO of Windermere, as well as several members of the Missouri Baptist Convention leadership.  They also participated in some team building exercises at the facility’s “ropes course” (although the group was staying safely on the “low ropes” portion of the course).

Tours of the facilities were arranged for the DOMs and their wives.  The waterfront dock and landscaped areas bordering the Lake of the Ozarks proved to be a popular place for informal gatherings.

Huddleston said he welcomes Missouri Baptists to come to see the facilities.  He said they have many challenges ahead of them — both financial and in improving the facilities which are in much need of upgrades and maintenance.   He reported their small staff of 15 people have big hearts, and they desire to serve and see the facility thrive.

He said their dream is to see the center used for church and pastor revitalization workshops.  They want to be a place where family ministry occurs.  They have a heart for kids and teenagers and want to see churches and associations use them for camps and retreats. Pastors are welcome to come and do personal study and spiritual renewal retreats.

“Come and stay with us and pay what you can, and if you can’t afford it, we will waive the cost” Huddleston said when asked about pastor retreat costs.

Huddleston added, “I believe Windermere was strategically placed in the middle of Missouri and the middle of the United States for a reason.”  He said it’s hard to get up everyday and see all the things in the camp that need fixing, but he is leading the staff to see Jesus instead of the broken things in the facility.

Phil Rector, the president of the Missouri Director of Missions Fellowship said he had attended the center as a young boy and again in college.  He served as a summer missionary there at the center and as a pastor and DOM attended association leadership training events at Windermere.

“I like this setting where we can come to listen to the Windermere leadership, hear their vision, and you have to be excited about that. It is refreshing to see them (Windermere) come back to the Missouri Baptist family,” Rector said.

The DOMs heard from Missouri Baptist team leaders and from the heads of some MBC affiliated entities, such as The Baptist Home.

Rodney Harrison, president of The Baptist Home, told the directors he sees several changes in churches coming in the “Post-COVID” world of churches:

• A hybrid model of online and onsite ministry settings

• Good leadership will be valued even more.

• Ministry skillsets will have to change.

• Duty has been redefined.

• Some trappings of “the church” may be forever forsaken.

• Acceptance of change has been radically accelerated.

• A new matrix of ministry impact and effectiveness will be implemented.

Huddleston provided statistics to the group saying that in spite of the COVD-19 challenges there were several groups who used the facility in the past year.  They had about 5,000 people attend events during the summer season, and they had 733 decisions for Christ during those camps and retreats held by various groups.

He said he sees the MBC as a strategic partner to the center.

Directors of missions certainly had a relaxed and refreshing retreat and enjoyed the comfortable setting, the meals, fellowship and recreational opportunities.