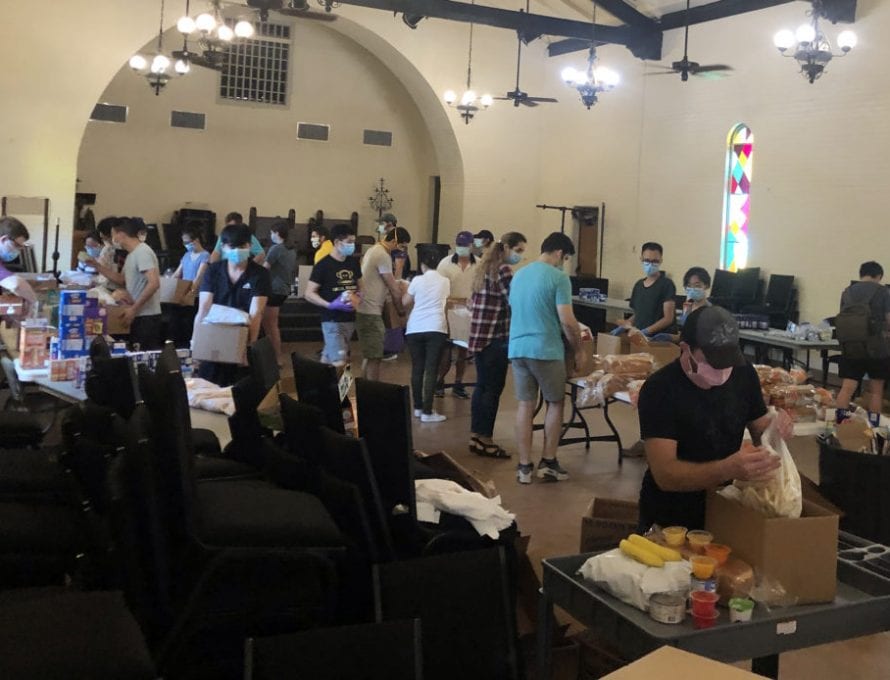 BATON ROUGE, La. – LSU international students select food for their boxes, which are provided by the Baptist Collegiate Ministry on campus. (Photo courtesy of Steve Masters)

“He wanted to know if we could provide him with some money or some food. So I gave him some personal money and I provided him with some direct food,” Masters said. “And that kind of triggered a thought that there were other students like this.”

The student’s request led to a weekly distribution of 70-80 food boxes to international students from numerous countries during the global COVID-19 pandemic’s economic slowdown, Masters said. Eggs, fresh meat, orange juice, a variety of canned goods and other staples fill the 14-inch boxes.

The Southern Baptist Convention Cooperative Program funds the Baptist Collegiate Ministry at LSU, as well as BCM outreaches at more than 20 other Louisiana colleges and universities. The Cooperative Program, the SBC’s system of funding local, national and international missions and ministries, helps fund the salaries of BCM leaders across the nation. Local Baptist associations also support the collegiate work.

The LSU BCM is following up with more than 40 food box recipients who have expressed a desire to know more about the Gospel. One has professed Jesus as Savior. Masters said many international students have volunteered for disaster relief projects following hurricanes Sally, Laura and Delta, and five students are now certified in Southern Baptist Disaster Relief chainsaw work. Students frequently visit area Southern Baptist churches.

“There’s over a million international students studying in the U.S. and many of them lost their jobs because the universities closed down. And then in the summertime, they closed down but the students were trapped,” unable to return to their home countries because of travel restrictions, Masters said. “We have an incredible opportunity to reach out to these students in the name of Christ. It is God bringing the world to us.”

The food box outreach began in March with a weekend distribution of 22 boxes of canned good donated by Hebron Baptist Church in Denham Springs, La.

“That triggered it,” Masters said. “We announced the need to our alums and to our parents, and over $30,000 worth of food has been provided from our BCM to international students at LSU.”

“Thank you so much for your generosity,” Jayvee of the Philippines told the BCM office. “God bless you more. Let’s continue to help and pray for each other. Let’s trust God. He is a miracle-maker.”

“This ministry has been very helpful,” Diego of Peru told the BCM. “Due to COVID-19, we don’t have the usual shuttles to go shopping.”

The food boxes supplement the weekly international dinners the BCM has served at LSU for 15 years. Each Monday night, more than 50 students gather for a meal, with rotating weekly emphases on games, culture and spirituality. The Gospel is proclaimed to students from a variety of religions including Islam, Buddhism and Christianity.

The food box distribution began because of limitations caused by the COVID-19 pandemic, but Masters expects the outreach to continue through the end of the year.

“I think for the summertime it was definitely the COVID need, but then we’ve discovered that it’s a continuing need, especially now because many of them … got trapped here,” he said. “Their countries have been decimated by the coronavirus, so they’re not getting as much money as they did from their parents, from their governments from home. … So COVID has definitely caused the greatest need.”