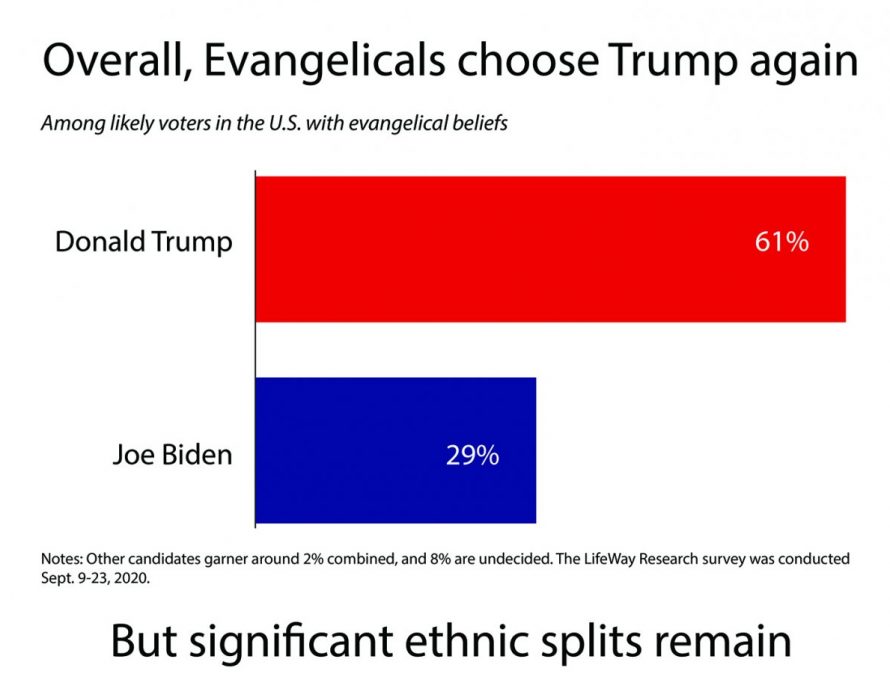 NASHVILLE, Tenn. (LifeWay Research) – Evangelicals seem ready to cast their ballots in the 2020 election. Nine in 10 evangelicals by belief are registered to vote, and few are undecided about their presidential choice.

Overall, 61% of evangelicals by belief plan to vote for Trump and 29% for Biden. Other candidates garner around 2% combined. Fewer than 1 in 10 (8%) are undecided.

Evangelicals by belief are also twice as likely to identify as a Republican (51%) than a Democrat (23%). One in 5 (20%) say they are independent.

Voting plans for Americans without evangelical beliefs are almost the mirror opposite of their evangelical counterparts, with Biden holding a commanding 56% to 33% lead over Trump.

President Trump’s advantage among evangelicals, however, comes primarily from white evangelicals, among whom he leads Biden 73% to 18%.

African Americans with evangelical beliefs overwhelmingly plan to vote for Biden (69% to 19%). Among American evangelicals of other ethnicities, however, Trump has a 58% to 32% lead.

While almost a quarter of white evangelicals were undecided or supporters of a third party in 2016, few say the same in 2020. Only 2% back a third-party candidate this year, compared to 8% four years ago. And while 16% were undecided in 2016, that number fell to 7% this year.

Among likely voters who identify as Christian and attend church at least once a month, support for Trump and Biden is evenly split (46% to 45%). As with evangelicals, ethnic divides are also present among churchgoers.

White churchgoers back Trump 59% to 30%, while African American churchgoers are solidly behind Biden (86% to 9%). The former vice president also has a sizeable—though smaller—lead among Hispanic churchgoers (58% to 36%) and churchgoers of other ethnicities (49% to 36%).