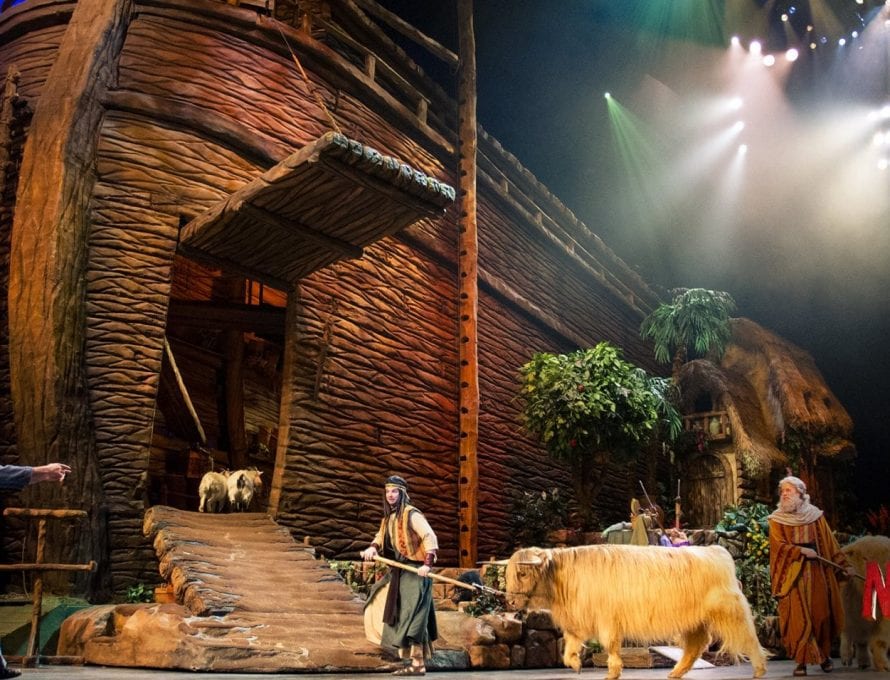 BRANSON – At Sight & Sound’s on-stage showing of “NOAH,” audience members feel like they are in the Ark, surrounded by elephants, giraffes, lions, goats, ducks, orangutans, gorillas and doves. They hear rain pounding and thunder crashing outside the ark. They hear the cries of men and women, desperate for help. They hear Noah and his family weeping for loved ones lost in the storm. God had closed the door of the Ark, and no one could open it. God had made a way to be saved, but now it was too late.

Showing at the Sight & Sound Theatres in Branson through the remainder of 2020, “NOAH” points to Jesus, who died on the cross to be an “Ark,” or way to salvation, for all who believe in Him. It also reminds viewers that someday the door to salvation through Jesus will be shut. “For as were the days of Noah, so will be the coming of the Son of Man” (Matthew 24:37).

With a talented cast and beautiful music, the play helps viewers think deeply about the Bible story of Noah. Take, for example, this fun fact: Noah’s grandfather, Methuselah, died right before the flood, even though he had known the first man, Adam, and his son, Seth.

But also, reading between the lines, consider how people responded to Noah as he built the Ark. Many people simply opposed Noah. Others wanted to save a room on the Ark, just in case Noah would be right, yet they refused to believe in God or change their ways. In the end, they were lost, but Noah and his family were saved. In both cases, “NOAH” sets the right tone. The show’s depiction of God’s judgment was neither harsh nor vindictive, but somber and tragic. And its depiction of God’s mercy wasn’t fickle or sparing, but rich and abundant.

The performance of actress Audrey Roberts, playing Noah’s daughter-in-law Cayla (Japheth’s wife), was heart-wrenching, especially as she begged her parents to join her on the Ark and wept at their refusal. Actor Kevin Day’s portrayal of Noah was fantastic. He didn’t come across as smug or self-righteous, but rather as friendly, authentic, passionate and godly.