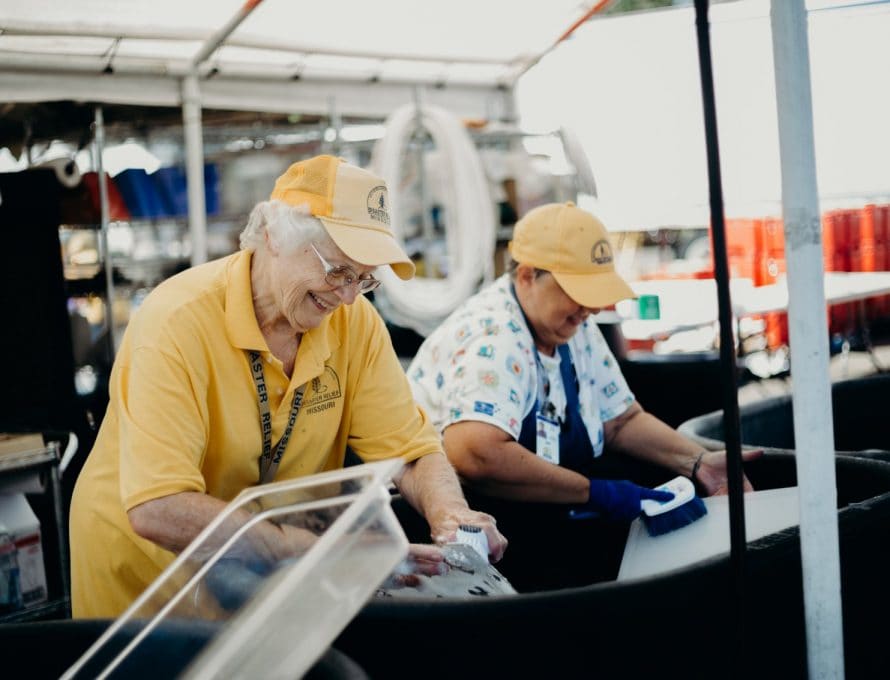 DERIDDER, La. – Missouri Baptist Disaster Relief volunteers clean dishes at a kitchen they set up here in the aftermath of Hurricane Laura. (Photo courtesy of Association of State Baptist Publications)

DERIDDER, La. – Missouri Baptist Disaster Relief volunteers continue to bring help and hope to survivors of Hurricane Laura here. They’re expected to stay in the area until at least the end of October. Also, some DR volunteers have now been deployed to help in Louisiana following the second hurricane to hit the area in six weeks.

“The spirit of the volunteers has been tremendous,” Gaylon Moss, director of Disaster Relief, told The Pathway. As of Oct. 9, he said, Missouri Baptist volunteers in DeRidder, working alongside colleagues from across the nation, have put in 23,000 volunteer hours. They have completed 200 jobs so far, and the kitchen crew prepared 85,000 meals. Missouri’s kitchen crew has now been demobilized, but chainsaw and clean-up crews are still on the ground.

So far, DR volunteers have celebrated 13 new professions of faith in Christ in DeRidder.

Now, Hurricane Delta has brought destruction once again to Louisiana, only a few weeks after Hurricane Laura hit the state. But even as Hurricane Delta touched down in Louisiana, a small team of DR leaders and equipment was already in Little Rock, Ark. They soon went from there to set up a kitchen for feeding hurricane survivors after the storm passed through.

According to the Louisiana Baptist Message, the eye of Hurricane Delta crashed ashore at 5 p.m., Oct. 9. as a Category 2 storm with maximum sustained winds of 100 mph in Creole, La., nearly 13 miles east of Cameron, La., where Laura made landfall as a Category 4 hurricane (150 mph winds) on Aug. 27.

According to the National Weather Service, Delta had weakened to barely a tropical storm (35 mph sustained winds) as it exited into Mississippi at 7 a.m., Oct. 10, having followed a nearly identical path as Laura.

“We are in the process of assessing the needs, making decisions about locations for our base of disaster relief operations and bringing back online the operations we had in place responding to Laura,” Louisiana Baptist Executive Director Steve Horn told the Baptist Message. “These will continue to be challenging times, but the beauty of this morning can be a reminder to us that God’s faithfulness is new every morning.”

Bruce Baker, director of missions for Carey Baptist Association, said people are weary. Many were repairing their homes that were damaged by Laura and must now deal with the aftermath of a second hurricane.

“Adding damage from Delta to the area will be devastating for many,” he said. “I am praying that I suffer well. That people will remember how much we love Jesus and our neighbors and not how much we suffer. In many ways it is better that the storm followed a track similar to Laura. No reason for someone else to get new damage.”

(This article includes reporting from staff members of The Pathway and the Louisiana Baptist Message, as well as the Association of State Baptist Publications.)