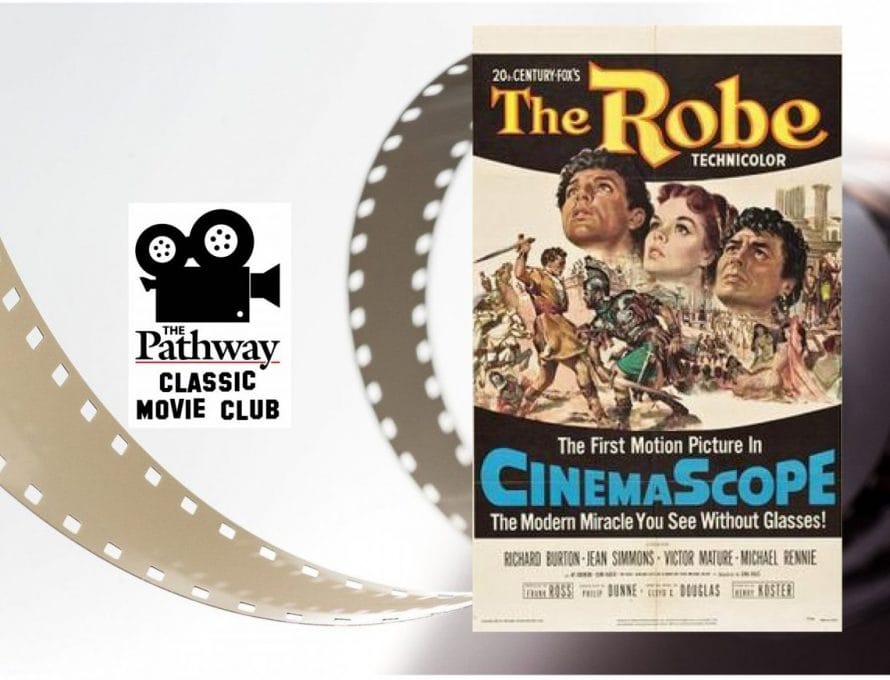 “We the nobles of Rome are free to live only for our own pleasure. Could any god offer us more?” Thus begins the 1953 biblical epic, “The Robe.”

And yet, it’s barely a “biblical” epic. Last month we looked at “Barabbas,” which created a fictional backstory of a man barely mentioned in the Bible, but at least he was a man. “The Robe” creates a fictional backstory for the garments worn by Christ and won by a gambling Roman soldier at the foot of the cross.

Richard Burton (most famous for being married to Elizabeth Taylor… twice) stars as Marcellus Gallius, a made-up Roman tribune tasked with carrying out Christ’s execution. He’s joined by Victor Mature (Samson from “Samson and Delilah”) as a freed slave convinced that Jesus is indeed the long-promised Messiah. Both men’s lives are thrown into chaos by the titular robe of Christ.

All four Gospels mention the clothes that Jesus wore being divided by lots among the soldiers. The pivotal event of the movie is indeed biblical, but the bulk of the movie is complete fiction. Whereas last month’s “Barabbas” created hypothetical backstory of a man barely mentioned in the Bible, “The Robe” creates a hypothetical backstory for the garments worn by Christ and won by those soldiers at the cross.

Much like “Barabbas” you can ding “The Robe” for treating the Savior of all Mankind or the biblical narrative as a tangential plot point in service of a man-centered story. This is fair criticism. We never really even see Jesus in the movie; only other characters’ reaction to Him. A movie will never be a substitute for studying the Word of God. However, I prefer to think of these films as hypothetical examples of how the gospel enters into our own stories, taking over the starring roles of our own “movies.”

I thoroughly enjoyed the first half of “The Robe.” Alas, things devolved from there.  The superstition surrounding the actual physical object of the robe began to wear on me. It bordered too much on relic-worship for me.

Lest I mention “Barabbas” too much, that movie was a thoughtful and subtle study of a man dealing with the very real knowledge that Christ died in his place. “The Robe” is a more superstitious tale. Anthony Quinn’s Barabbas was deeply affected by Christ’s sacrifice. Richard Burton’s Marcellus was deeply haunted by His laundry.