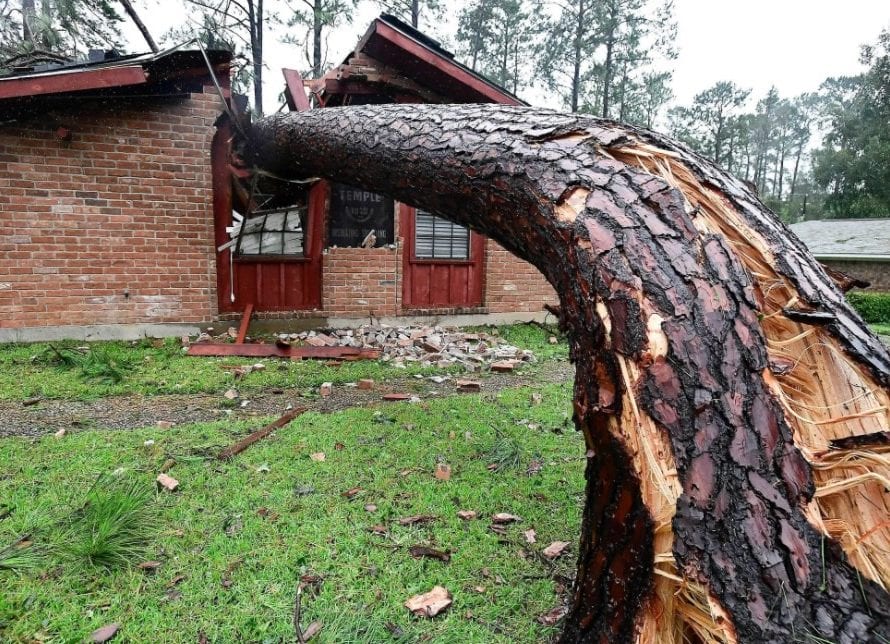 DERIDDER, La. – During most disasters, it’s American Red Cross volunteers that distribute the thousands of hot meals cooked and packaged by Missouri Baptist Disaster Relief volunteers. In hurricane-battered DeRidder, it was a hurricane survivor named Mitch, along with other local residents.

DeRidder is a city of about 10,000 in western Louisiana. When Hurricane Laura hit, she hit the city hard. After making landfall Aug. 26, the strongest hurricane ever to hit the state dumped millions of gallons of water, but it was primarily the wind that tore up DeRidder. Huge trees – pine and oak – were torn apart and uprooted, damaging thousands of homes. This also meant downed power lines: 25 miles of them around DeRidder alone.

Normally, this would mean volunteers like Missouri Baptist Disaster Relief spring in to action: bringing help, hope and healing in Jesus’s name by transporting mobile kitchens into the disaster area, setting up shop and partnering with the American Red Cross to deliver food to those without power. The Missouri-based kitchens still rolled south, and the Red Cross still provided the food, but the Red Cross ERVs (Emergency Response Vehicles and drivers) were not deployed due to concerns about the COVID-19 pandemic. That meant the hungry came to the mobile kitchens themselves. So the Missouri Baptist Disaster Relief volunteers based at First Baptist Church in DeRidder joined church members to help distribute some 7,000 meals a day at their busiest.

“Their people were there working hard,” Barnhill said. “It was 105, 106 degrees. It was tough conditions, but their group held in there.”

This was different for MBC DR feeding units in a logistics sense, but also in a ministry sense. The feeding volunteers actually got to see many of the storm survivors they were helping, instead of simply loading the meals into a vehicle to be driven out for delivery.

“You could tell by looking at the people coming through the line that it was not economic-based,” Barnhill said, “It was everybody. They were glad to get a hot meal and bag of ice.”

When Barnhill saw a need to help in the kitchen’s scullery cleaning, he asked for volunteers from FBC DeRidder and Mitch stepped up. Barnhill had seen him handing out food the day before, but it wasn’t until after he worked the entire day that anyone realized that Mitch wasn’t just a volunteer; he was a survivor.

His house was a total loss. As was his son’s.

“You could see it on the guy’s face,” Barnhill said. “There was just this bewilderment about what to do. The only thing he could think to do was wash dishes and serve his community. It was a great testimony of how we’re supposed to be serving and giving the glory to God. It was a great encouragement to us…. It didn’t seem so hot after that.”