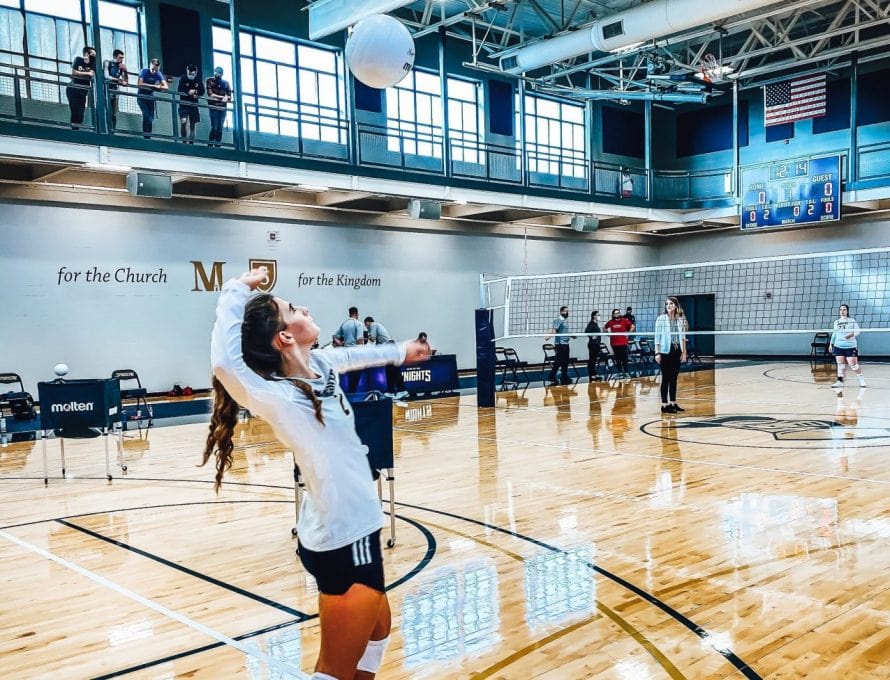 KANSAS CITY – The volleyball era at Spurgeon College got off to a rousing start, Sept. 1. Spurgeon College’s Knights battled Calvary University in a five-set match—taking the Warriors to the brink of elimination before falling just short—losing 20-25, 11-25, 25-18, 27-25, and 16-18.

The historic evening at the Mathena Student Center saw a raucous crowd whose spirit wasn’t dampened in any way by social distancing measures in the stands nor by masks on their faces. In fact, after the initial excitement of the game was briefly tempered by losses in the first two sets, the crowd urged the Knights to climb back into the match and roared louder and louder throughout the comeback.

President Jason Allen praised the Knights for their strong effort saying, “This was an electric night in the Mathena Student Center. The atmosphere we experienced here is all we had hoped for when introducing collegiate sports to our campus.

“I can’t be prouder of the effort our Knights made in battling a very talented Calvary University varsity squad to the very end. Obviously, we were pulling for the win, but thanks to the great work of Coach Evie Stanton, and the tremendous effort of our team, they played tough and the future is bright.”

Calvary took the first two sets handily and had the third set under control when the Knights furious comeback began. The Knights then staved off a match point in the fourth game before going on to force game five. The decisive game saw the Knights one point away from victory, when the Warriors stormed back for the win.

Sidney Miller, a freshman from San Antonio, Texas, led the Knights in most categories including a game high double-double with 28 kills and 13 digs. She added two aces and had a .388 hitting percentage—overall, she accounted for 30 points.

Shaley Miller, a sophomore from Kansas City, Mo., contributed 31 assists, which was also a game high.

Stanton admitted that the competition brought by Calvary was solid and challenged her team. However, she was proud of the Knights’ drive to compete.

“The team played with so much grit, determination, and heart,” Stanton said. “They listened intently during timeouts and responded so well to adversity, which is something we’ve been working on in practice. At the start of game three, I looked at them and told them to give it all they had and control the little things on our side of the court, and that is exactly what they did. It was so fun to watch them fight for every single point and never give up.”

She added, “Each day the team improves, so I cannot wait to see where we are at the end of the season from where we are now. We’re on an upward trajectory, and we won’t stop pushing to get better every single day.”

Stanton also explained that she’s thrilled about Spurgeon Volleyball now playing a significant role in the MBTS/Spurgeon community saying that it adds an element of excitement to campus life and brings everyone together in a special way.

“I couldn’t ask for anything more from the campus community than what they brought tonight,” Stanton said. “It was completely electric during the game. It was so fun to see students, faculty, and staff rally around these girls and cheer them on until the very end. To see the support that was given, and how loud it got in the Mathena Student Center from the cheers of our fans, was so special.”

In October of 2018, Midwestern Seminary’s trustees received plans from the administration to field sports teams at Spurgeon College through the NCCAA—beginning with basketball. In November of 2019, the school hired Stanton as head coach and announced its intent to field a women’s volleyball team. Since that time, Stanton has worked toward developing the program.

“There were a lot of ups and downs in the recruiting process and in just forming this team in general,” Stanton said. “However, I couldn’t be more pleased with the young ladies the Lord has brought to Spurgeon Volleyball. They all have the desire for God to be glorified above all else, and they are a joy to coach.”

She added that her goals for the team reach beyond that of many collegiate volleyball programs saying, “Being competitive on the court is important, but the most important thing to me is that volleyball is not the primary focus of these girls’ lives. My desire is that they earnestly seek Christ in everything they do, and that they would take what they learn here at Spurgeon College and use it to further the kingdom of God, making disciples wherever they go.”

The Knights’ next game will be on the road against Barclay College in Haviland, Kan., on Sept. 5. The next home game will take place on Sept. 8 versus Ozark Christian College from Joplin, Mo.